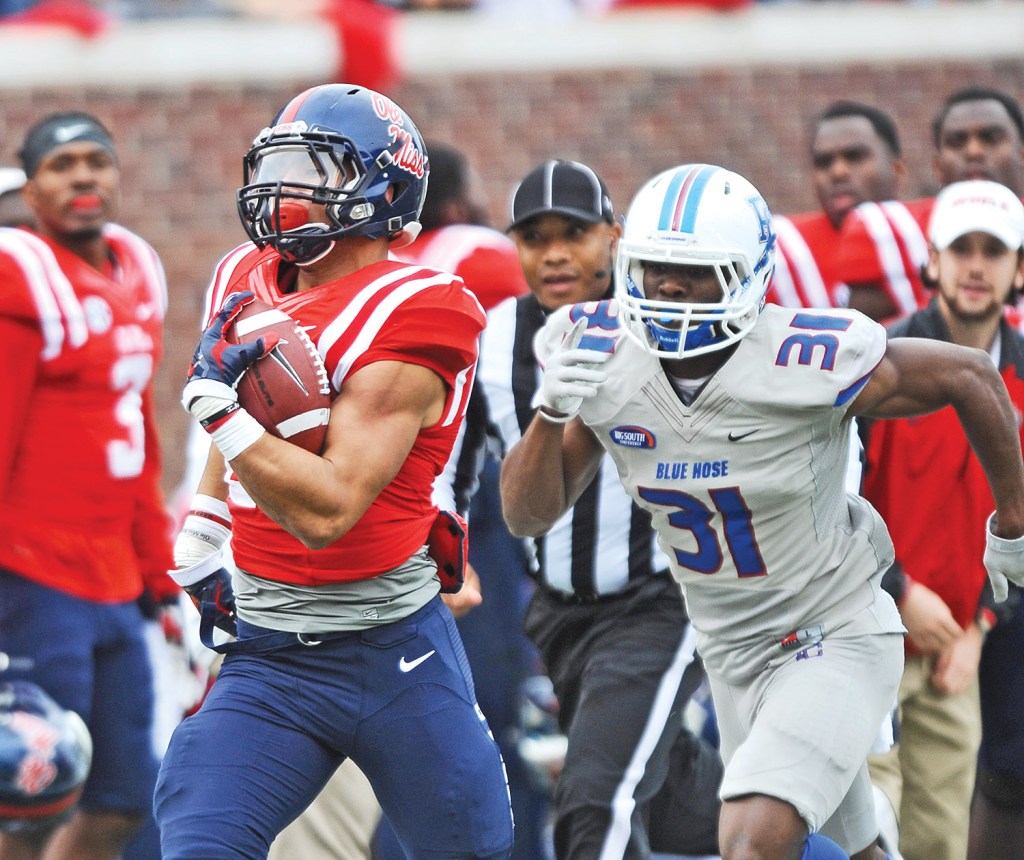 No. 12 Ole Miss jumped on its lone Football Championship Subdivision opponent of the season, got its backups a ton of snaps and overwhelmed Presbyterian College for a 48-0 win in front of 60,546 fans clad mostly in red and blue.

Ole Miss (8-2 overall) had a handful of starters sitting with injuries, but it didn’t stop the Rebels from turning in gobs of big plays against the overmatched Blue Hose (5-5) and ending a two-game losing streak heading into its second bye week of the season.

“That’s a good day,” Ole Miss coach Hugh Freeze said. “I was able to sit quite a few guys today with some getting very few reps. Hopefully we’ll be as healthy as we’ve been in a long time in a couple weeks when we travel to Fayetteville (against Arkansas).”

The Rebels outgained Presbyterian 640-156 in total offense. It started with Vince Sanders’ 66-yard catch-and-run score on the second play of the game and included a 73-yard touchdown run by Jordan Wilkins, 65- and 62-yard touchdown runs by Mark Dodson and another 50-yarder by Wilkins.

By the time it was over, the Rebels had their most successful day on the ground all season with 402 rushing yards, even with offensive linemen Laremy Tunsil and Aaron Morris watching in street clothes. Wilkins and Dodson shared the workload filling in for Jaylen Walton and I’Tavius Mathers, finishing with 171 and 128 yards, respectively. All of Dodson’s yards came on three carries.

“Obviously that’s not an SEC defense over there, but we’ve really sold ourselves that we’ve got to get better at the run game,” offensive coordinator Dan Werner said. “We did today.”

Quarterback Bo Wallace was 11 of 15 for 140 yards with two touchdowns and a pick and also ran for a 9-yard score in helping Ole Miss build a 35-0 lead at the half. Sanders had four catches for 110 yards and two scores.

Presbyterian couldn’t do anything to muster a threat. The Blue Hose, who have lost to all three of their Football Bowl Subdivision opponents by at least 40 points, averaged 2.8 yards per play and never got past Ole Miss’ 38-yard line. Quarterback Heys McMath completed just nine of his 17 attempts for 59 yards, and Serderius Bryant intercepted McMath in the second quarter to run the Rebels’ string of consecutive games with a takeaway to 33.

The Rebels emptied their bench throughout, but began making wholesale changes in the second half.

Freshman DeVante Kincade relieved Wallace on the first possession of the third quarter and alternated the rest of the way with fellow freshman Ryan Buchanan. Kincade finished 7-for8 for 70 yards with a 31-yard touchdown pass to Derrick Jones while Buchanan went 6-for-7 for 28 yards.

“They got more than normal (reps) in getting prepared,” Freeze said of Kincade and Buchanan. “I thought they both played well. We obviously didn’t let them turn it loose and throw it down the field much because of the score, but I’m confident that they can.”