COLUMN: Ole Miss — and its title hopes — go quietly into the night 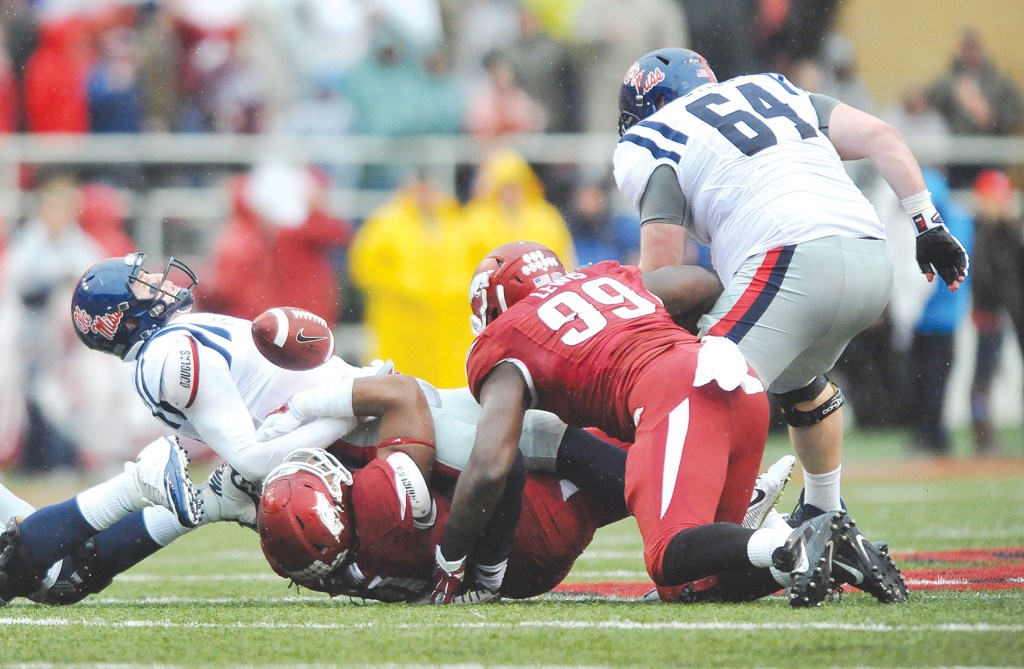 AYETTEVILLE, Ark. — Brandon Allen took the snap, faked a handoff to his running back, popped his head around and fired a pass toward Keon Hatcher in the end zone. Hatcher extended his arms, secured the ball before falling to the ground and gave Arkansas a quick 7-0 lead over Ole Miss in the first quarter.

It was only the Razorbacks’ third play from scrimmage. It came less than three minutes into the game.

But Ole Miss was done.

That’s a weird thing to type considering this is an Ole Miss offense that entered the weekend averaging at least 30 points a game for the third straight season under head coach Hugh Freeze. This is the same team that went back and forth in a scoring frenzy with Auburn just a few weeks ago and had only been held without points once in Freeze’s tenure, that coming against a Nick Saban defense last year.

But Arkansas took the momentum of that quick strike and ran past Ole Miss with it full speed.

Arkansas’ worst field position on each of its first three drives was its own 48. Bo Wallace’s first fumble on a day he’d probably like to forget as much as last year’s Egg Bowl gave Arkansas the ball at Ole Miss’ 29 minutes after that first score.

Kailo Moore saw John Henson’s ensuing kickoff heading for the sideline. Instead of letting it go out of bounds, Moore fielded the ball and let his momentum carry him out of bounds at the 2. Ole Miss punted six plays later.

Nine plays after that, another touchdown. 17-0.

The harder they tried, the more the Rebels floundered. It ended up 30-0.

Ole Miss got to the red zone twice, but both trips ended with Wallace being picked in the end zone as part of a four-turnover day for the senior. And running the ball? You already know how that turned out.

The Rebels were running for just 146 yards a game in league play coming in and averaging just 3.9 yards a carry. Ole Miss would’ve killed for those numbers Saturday as the Rebels mustered just 63 yards on 33 attempts, a measly 1.9 yards per carry.

If you didn’t know any better, you would’ve sworn Ole Miss was the team that had lost 17 of its last 18 SEC games and Arkansas was the squad that was still fighting for the right to represent the West in next month’s SEC title game.

But it was Ole Miss that started the day with that chance. Win out, have Auburn beat Alabama, and it would be the Rebels who would win the three-way tie with the Crimson Tide and Mississippi State and earn its first-ever trip to Atlanta. It’s asking a lot, but stranger things have happened.

Well, it could’ve happened. Until Ole Miss quietly bowed out of contention with one of its worst overall performances when it could least afford it.

But maybe it couldn’t have happened.

Ole Miss is on the right track under Freeze, but games against SEC competition have exposed the weaknesses that are keeping the Rebels from being among the league’s elites. The aforementioned running game has to get drastically better, specifically in the trenches, an area that can only be addressed in recruiting (Drew Richmond and Javon Patterson, anyone?) And as fast and athletic as the Rebels are on defense, they have to add more size and depth up front to counter the power running games they’re seeing from the likes of Arkansas, LSU and Alabama.

Even with those deficiencies, Ole Miss had fought all year to give itself a fighting chance in the end.

It went away Saturday in Fayetteville with a thud.