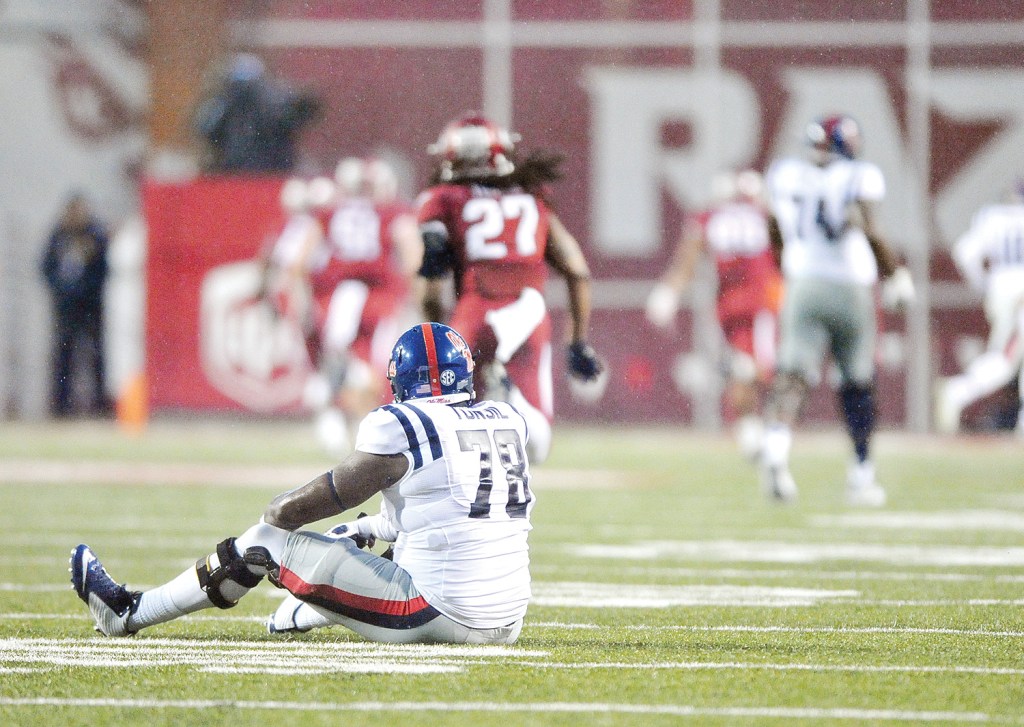 FAYETTEVILLE, Ark. — The dream is over.

The weekend started with Ole Miss still having a chance, however slim it was, to represent the Western Division in next month’s Southeastern Conference Championship Game for the first time ever.

But Ole Miss doesn’t have to beat Mississippi State. And forget about the Iron Bowl.

None of that matters anymore. Not after No. 8 Ole Miss never gave itself a chance against Arkansas.

The Rebels’ offense sputtered with and without a healthy Bo Wallace, and Arkansas used the momentum of an early offensive surge to eliminate Ole Miss (8-3, 4-3 SEC) from any kind of title contention with a 30-0 win Saturday in front of 64,510 at Donald W. Reynolds Razorback Stadium.

“They put it to us pretty good,” Ole Miss coach Hugh Freeze said.

Wallace left the game momentarily after spraining his ankle before returning late in the first half, but the senior was never close to being effective.

Wallace fumbled twice and threw interceptions on both of Ole Miss’ trips to the red zone, the final one returned 100 yards for a touchdown by Rohan Gaines late in the third quarter to make it 27-0 and end any thoughts of a comeback.

The Rebels turned it over six times.

“I just kept hoping we could get something good to happen and cut that thing to a score or two,” Freeze said. “I think our defense would’ve played well enough to give us a chance, but we never did.”

Wallace, who entered the game with just one pick against SEC defenses, finished 16 of 31 for 235 yards. Ole Miss’ running game continued its struggles, producing just 63 yards against the league’s fourth-best run defense.

Arkansas (6-5, 2-5) pitched its second straight shutout after snapping its 17-game SEC losing streak against LSU a week ago. Alex Collins and Jonathan Williams each ran for 86 yards. Quarterback Brandon Allen threw a touchdown in the first quarter before leaving with a back injury and being replaced by his brother, Austin.

Wallace had his right ankle rolled up on while being sacked by Darius Philon early in the second quarter and fumbled. He limped off the field with the help of trainers and was taken to the locker room.

But Arkansas was already in control by then.

Ole Miss mustered just 19 yards on its first three drives while Arkansas had 125 yards before the first quarter was over on its way to a 17-0 lead. Allen’s 25-yard TD pass to Keon Hatcher came less than three minutes in, and Wallace’s first fumble on the Rebels’ next possession deep in Arkansas territory eventually turned into a 22-yard field goal from Adam McFain.

“It’s a team game,” Ole Miss linebacker Deterrian Shackelford. “I feel like defensively, offensively, special teams, we just didn’t quite show up like we should have to win this game against a very good Arkansas team.”

Arkansas added to its lead a possession later on Collins’ 1-yard touchdown run on fourth down with 1:09 left in the opening quarter. Issac Gross broke through the Razorbacks’ offensive line and forced a fumble a play earlier, but an offside penalty on C.J. Johnson negated the turnover and gave Arkansas another try.