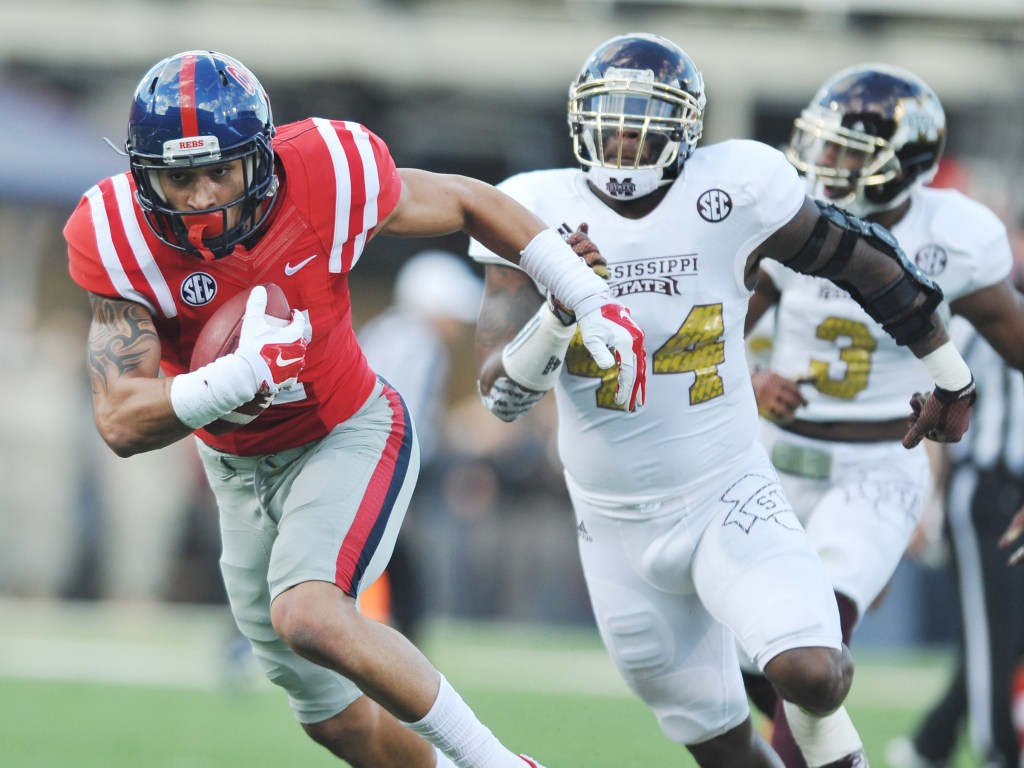 Ole Miss tight end Evan Engram (17) is chased by Mississippi State linebacker Christian Holmes (44) on Saturday at Vaught-Hemingway Stadium in Oxford, Mississippi. Much like Donte Moncrief a couple of years ago, Engram torched the Bulldogs for a career-high 176 yards on five catches. (Bruce Newman)

If Ole Miss’ final win of the regular season Saturday afternoon had a familiar feeling, you may be onto something.

There the state’s biggest rivals were, squaring off against each other at Vaught-Hemingway Stadium in the latest rendition of the Egg Bowl. Mississippi State, ranked No. 4 in all the major polls — including the one that counts, the College Football Playoff rankings — was the favorite in the Rebels’ backyard against an Ole Miss team that limped into Saturday losers in each of its last three Southeastern Conference games.

A win over Ole Miss, and Mississippi State would have a case to make for being one of the four teams to be a part of Division I’s first-ever playoff. If Ole Miss had anything to play for, it was pride and a bowl game somewhere in Florida.

But there was Ole Miss controlling the game. Just about every time you looked up, there was Evan Engram running by Bulldog linebackers and safeties for big gainer after big gainer on the way to a career-high 176 receiving yards. The defense clamped down on Mississippi State quarterback Dak Prescott’s legs — and Josh Robinson’s, too — and before the third quarter was over, the Rebels had opened up a two-touchdown lead.

If you’re an Ole Miss fan, you vividly remember that game and everything that surrounded it. Granted, it didn’t have anything close to the national ramifications that this year’s meeting did, but the similarities everywhere else were scary.

Ole Miss entered that game looking up at Mississippi State in the West standings, and not many expected Hugh Freeze’s first Ole Miss team to beat the Bulldogs that night in Vaught-Hemingway Stadium. Ole Miss, riding a three-game losing streak within the conference, needed a victory just to become bowl-eligible while the Bulldogs were trying to improve their spot in the bowl pecking order.

Ole Miss never gave the Bulldogs much of a shot.

Somewhat like this year, Mississippi State did take a lead on Tyler Russell’s 42-yard touchdown pass to Chad Bumphis late in the first quarter two years ago, but it didn’t last long. Ole Miss went up 17-14 midway through the second quarter and poured it on thick, leading by as many 24 and cruising to a 41-24 victory.

Another talented receiver was at the center of the rout.

Donte Moncrief, who’s now playing on Sundays for the Indianapolis Colts, spent the night blowing by fellow NFLer Johnthan Banks and the rest of the Bulldogs’ secondary for a career-high 173 yards.

Bo Wallace, in his first year as the starter, finished with 294 yards on just 15 completions in that game. He had 296 on 13 completions Saturday. Jeff Scott (111 yards) led a running game that helped out with 233 yards that night. Jaylen Walton’s career-high 149 helped the Rebels racked up 205 this year.

It would’ve been hard for Wallace to be in any more of a groove than he was against the Bulldogs two Novembers ago. He threw five touchdowns in that game, three of them to Moncrief. Fighting through a severely sprained ankle, Wallace didn’t find Engram or anybody else for a score in this year’s meeting.

“Not that good,” Wallace said with a smile when asked if Saturday’s performance felt like 2012 all over again.

Maybe not, but it was good enough to stop the late-season bleeding and bring the Golden Egg back to Oxford.