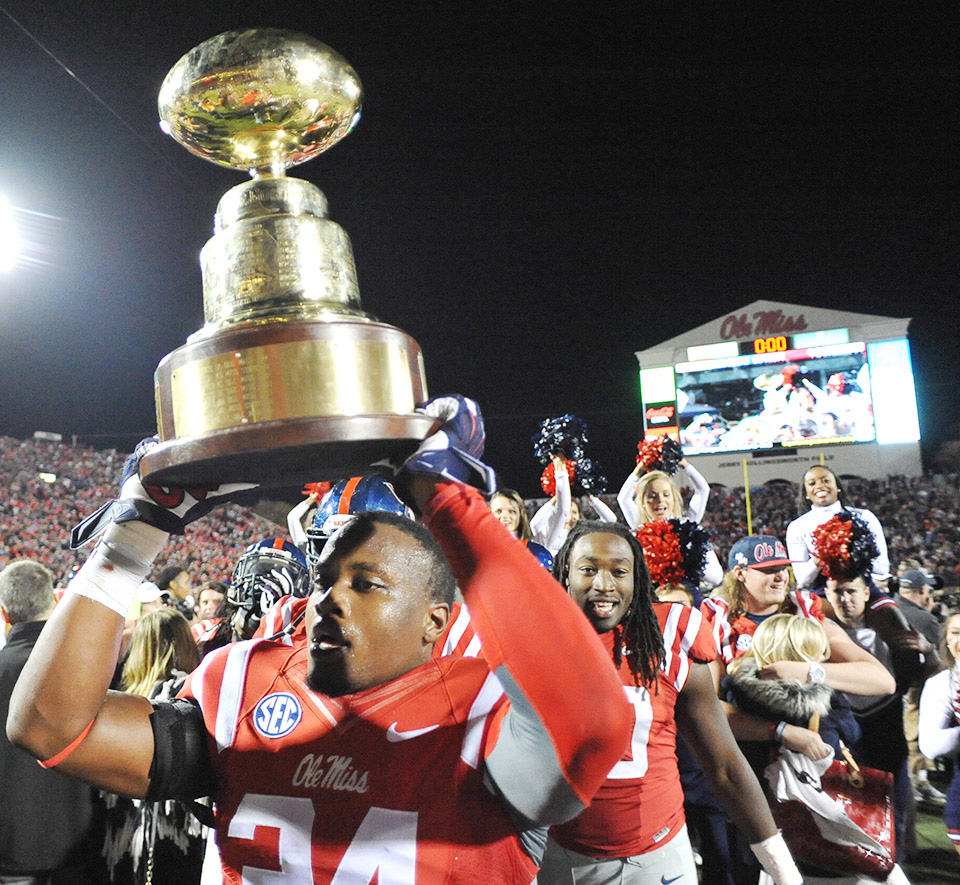 Ole Miss pulled out all the stops to dash its biggest rival’s championship dreams.

The 18th-ranked Rebels ripped off their longest run of the season, got a touchdown pass from a running back and shut down Mississippi State’s vaunted running game to end the regular-season with a 31-17 victory Saturday, snapping a three-game Southeastern Conference losing streak in front of 62,058 at Vaught-Hemingway Stadium.

The victory washed away the bad taste of last year’s 17-10 overtime loss to the Bulldogs (10-2, 6-2 SEC) that Ole Miss players said earlier in the week was still fresh on their minds. It also sent Alabama to next weekend’s SEC Championship Game as the Western Division representative and ended any chance of Mississippi State, which was ranked No. 4 in this week’s College Football Playoff rankings, being a part of the inaugural four-team postseason field.

“Our word for the week was resolve,” said Ole Miss coach Hugh Freeze, whose team lost any chance it had to get to Atlanta with the loss to Arkansas a week earlier. “We played with great resolve for 60 minutes. You see where that put us. Tonight, we were the better football team.”

Said defensive end C.J. Johnson, “I just think it was a great team win tonight, and we got back what was ours.”

Quarterback Bo Wallace nursed a sprained ankle all week that was heavily taped and completed just 13 of his 30 attempts, but they went for big yardage as the senior finished his final game in front of the home crowd with 296 yards and a rushing touchdown. Wallace repeatedly burned the Bulldogs’ defense in the middle of the field with tight end Evan Engram, who made catches of 46 and 83 yards to set up touchdowns as part of a career-best 176 yards on just five catches.

“Evan was just a mismatch, and he played a great game,” Wallace said.

The bigger surprise was the success the Rebels (9-3, 5-3) had on the ground against the league’s third-ranked run defense. Jaylen Walton finished with a career-high 149 yards on 14 carries, including a stop-and-start 91-yard touchdown that put Ole Miss up 24-10 late in the third quarter.

Jordan Wilkins accumulated 42 yards on his two carries as the Rebels piled up 205 rushing yards, the most against an SEC defense this season. Wilkins also delivered the knockout blow with his arm with 9:14 remaining when he took a pitch and pulled up at the last second to deliver a 31-yard touchdown pass to Cody Core for the final margin, answering Dak Prescott’s 32-yard touchdown toss to De’Runnya Wilson that drew the Bulldogs to within a touchdown a possession earlier.

Throwing was the only way Mississippi State moved the ball.

The 6-foot-2, 230-pound Prescott, who entered the game as the SEC’s sixth-leading rusher, was shut down by a Rebel defense that had been gashed by some of the power run games it had seen earlier in conference play. Prescott went 22 of 37 through the air for 282 yards, but the Rebels never let anybody get going on the ground.

Prescott had 48 yards on 24 carries, one of those a 1-yard touchdown to give Mississippi State a 10-7 lead early in the third quarter. Running back Josh Robinson, the league’s third-leading rusher, mustered just 44 yards on his 12 totes. The Bulldogs averaged 3.5 yards an attempt.

“LSU, they kicked our butt (running the ball),” Johnson said. “Arkansas, we fought our guts out, but they still kicked our butt. Tonight, I just think we manned up.”

Jeremy Liggins put the Rebels back in front for good with a 1-yard touchdown with 8:08 left in the third quarter, and Gary Wunderlich’s 39-yard field goal less than five minutes later pushed the lead to seven.

Mississippi State never got any closer.

“It’s a great feeling to reclaim the pride of our program and win the Egg Bowl,” Freeze said. “It’s a priority we have every year.”