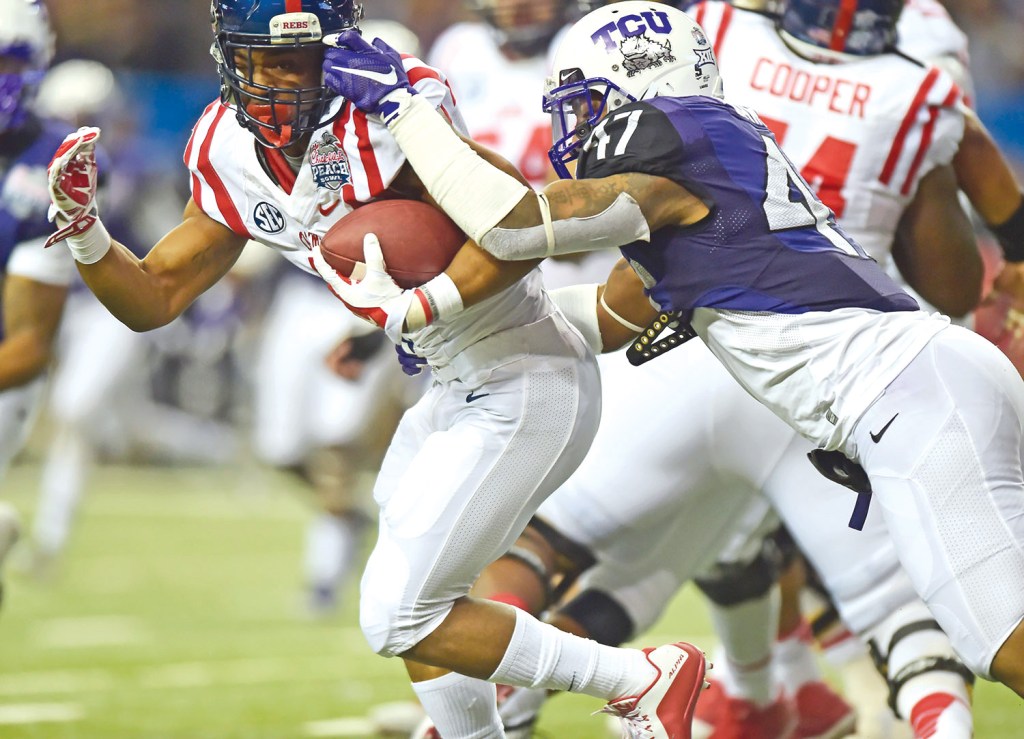 TCU linebacker Paul Dawson (47) is called for a facemask penalty as he tackles Ole Miss running back I'Tavius Mathers (5) during the Peach Bowl at the Georgia Dome in Atlanta on Wednesday. TCU won 42-3. (Bruce Newman)

ATLANTA — Mama said there’d be days like this. Hugh Freeze knows there could be some like this, too.

Not that it made this any easier to watch.

Ole Miss played in the first New Year’s Six bowl game ever Wednesday in Atlanta. And by played, I mean joined the 65,000-plus packed into the Georgia Dome to watch the show TCU put on in the Chick-fil-A Peach Bowl.

Because that’s exactly what it was.

The Ole Miss defense that suffocated its opponents all season allowed the most points it had all season in the 42-3 loss that was over by halftime. The Rebels allowed less than 14 points a game in the regular season, but Big 12 Player of the Year Trevone Boykin and company had that many before the first quarter was over.

When Boykin wasn’t hitting the Rebels deep or using his legs to make defenders look silly and keep drives alive, the Horned Frogs used Ole Miss’ speed and aggressiveness on that side of the ball against it. On its second play from scrimmage, TCU hit Ole Miss with a double pass — Boykin to wideout Kolby Listenbee, who lofted a pass over the drawn-up Cody Prewitt for a 31-yard touchdown strike to tailback Aaron Green — to set the tone.

A few Bo Wallace interceptions later, and the game was over.

It looked like a team that hadn’t been here before against one that has been here a lot.

TCU is a well-oiled machine under Gary Patterson. The Horned Frogs took their lumps last year after losing some talent and going back and forth between Casey Pachall and Boykin at quarterback, but this is where TCU is used to being under Patterson.

Wednesday’s game was the equivalent of a BCS bowl under the sport’s old postseason format, making it essentially the third one TCU has played under its coach — all in the last six seasons. The Horned Frogs played in the Rose Bowl — and won — and the Fiesta Bowl in the BCS era.

Patterson took over at TCU in 2000 and has turned one of the little guys into a program that can compete for national titles every season when you mix that kind of coaching — and Patterson and his staff were brilliant against Ole Miss — with the kind of recruiting hotbed that is Texas.

TCU is used to the big stage, and it showed Wednesday. Ole Miss ran into some stage fright.

Playing in these types of bowls with more consistency is where the Rebels are trying to get under Freeze. And make no mistake, with a salary now north of $4 million annually, it’s what Ole Miss is expecting.

But Wednesday’s laugher was a reminder that Ole Miss isn’t there yet.

Freeze has constantly referred to his plan to get the Rebels among the nation’s elite as a journey. It’s one that, after assessing the talent level and the depth of his roster upon taking over for Houston Nutt in December 2011, that Freeze himself didn’t think would include a trip to the postseason until this season.

It’s a big reason why expectations have risen so quickly in Oxford.

Ole Miss has been bowling each of Freeze’s first three seasons in town, and Wednesday’s was the first time the Rebels came out on the losing side. It was a sour ending to the season, but it’s one that included top-5 victories over Alabama and Mississippi State as part of a nine-win campaign, the most in Freeze’s short tenure.

But the lack of quality depth is still there, most notably on the offensive line. Ole Miss also played most of this season with a non-existent running game thanks to a lack of top-tier talent on the line and a true No. 1 running back and a quarterback that was as unpredictable as any in the country.

The issues Ole Miss has have to be addressed in recruiting, where Freeze has excelled. Two years after landing this super sophomore class, Ole Miss has commitments from offensive linemen Drew Richmond and Javon Patterson and running back Eric Swinney, all of whom are considered among the best nationally at their respective positions, for what should be another top 20 class nationally.

Ole Miss is starving to be among the SEC’s elite and become a nationally relevant program. Ross Bjork has made it obvious that he thinks Freeze is the man to get the Rebels there.

But as games like Wednesday’s against teams that are already there showed, Ole Miss is still working on it.