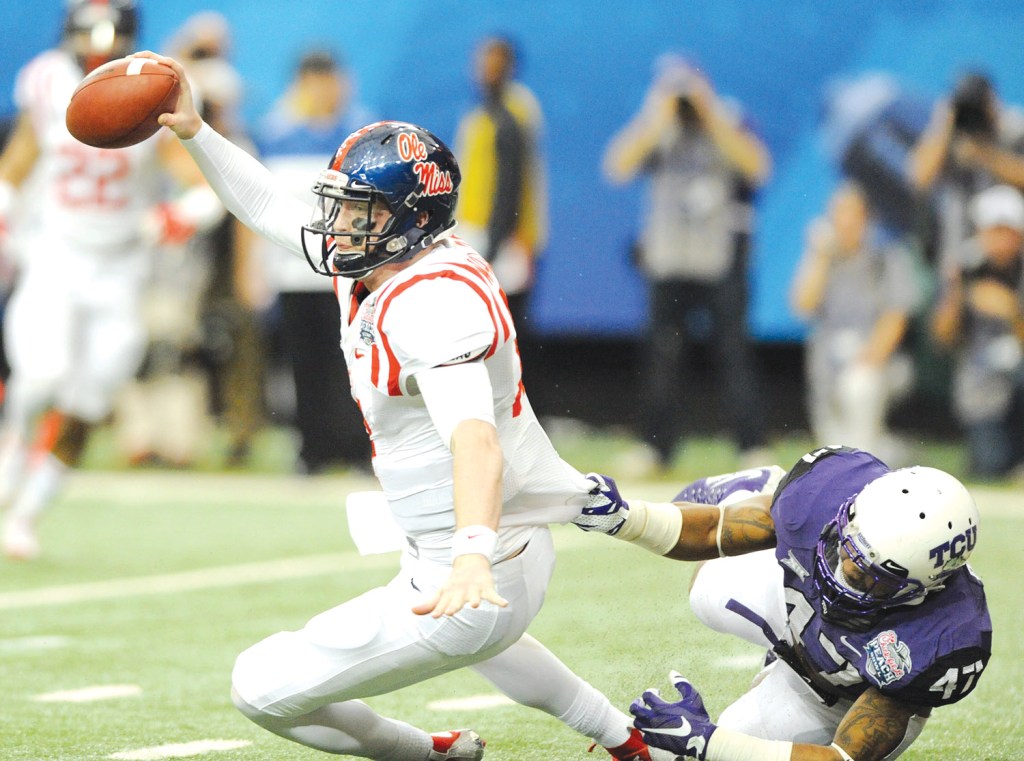 ATLANTA — Ole Miss’ performance in the Chick-fil-A Peach Bowl will be remembered for all the wrong reasons.

Playing in the first-ever New Year’s Six bowl game, the ninth-ranked Rebels were overmatched by No. 6 TCU in a 42-3 loss Wednesday in front of 65,706 at the Georgia Dome. And it wasn’t that close.

An Ole Miss defense that started the day leading the nation with 13.9 points allowed per game gave up more than that midway through the first quarter, the Rebels’ offense couldn’t stay out of its own way, and Ole Miss succumbed to a Horned Frog team that played like it was plenty miffed after not being selected as one of the four teams to take part in the inaugural College Football Playoff.

“We’re happy to be Chick-fil-A Bowl champions,” said TCU quarterback Trevone Boykin, who was named the Offensive MVP after throwing for 187 yards and three scores. “We’re going to live with that for the rest of our lives, and hopefully next year we can be one of those top four teams.”

Both teams ended the regular season on highs with Ole Miss (9-4) knocking off rival Mississippi State in the Egg Bowl and TCU (12-1) pummeling Iowa State.

But the Horned Frogs dropped to the Peach Bowl after falling from No. 3 to No. 6 in the final playoff rankings, making for a sexy matchup between the nation’s top scoring defense and the second-best scoring offense.

TCU took all its frustrations out on the Rebels, who suffered their worst loss since a 52-3 drubbing to LSU in 2011.

The Horned Frogs’ up-tempo attack rolled up 423 yards on 79 plays and got 252 total yards from Boykin, who had three picks but finished 22 of 31 and covered 35, 27 and 12 yards on his touchdown tosses. TCU got plenty of extra possessions at the expense of Ole Miss signal caller Bo Wallace, whose up-and-down career ended with one of his worst performances with three interceptions and four turnovers in all.

“They’re a good defense,” said Wallace, who completed just 10 of his 23 attempts for 109 yards. “They won some one-on-ones. Give credit to them, they had a good plan against us.”

Wallace threw all of his picks in the first half, matching the three he had in the first two quarters of the season opener against Boise State in the same building in late August. TCU took advantage of the miscues to bury the Rebels early.

TCU turned Wallace’s first pick into a 31-yard touchdown pass from Kolby Listenbee to running back Aaron Green on a double pass for a 7-0 lead. Green added a 15-yard touchdown run on TCU’s next possession, and by the time Boykin found Josh Doctson over the middle from 12 yards out for a 21-0 lead early in the second quarter, Ole Miss had surrendered more first-half points than in any game all season.

“They were hitting us with a little tempo there,” defensive end C.J. Johnson said. “We were kind of looking over to the sideline and guys weren’t quite getting lined up, and we missed a few assignments. … I think it was just poor execution on our part.”

Things went from bad to worse late in the second quarter when Wallace was pressured in the back of the end zone and got rid of the ball while falling to the ground. But the pass didn’t get past the goal line, and James McFarland was there for the pick six to push TCU’s advantage to 28-0 at the half.

Wallace, who shared series with DeVante Kincade in the second half, was sacked five times as Ole Miss mustered a season-low 129 yards of offense. The Rebels ran 37 times for a season-low 9 yards and averaged 2 yards per play.

“They had a good scheme for us,” Ole Miss coach Hugh Freeze said. “Felt like they knew when we were passing and when we weren’t, and boy they won a bunch of one-on-ones.”