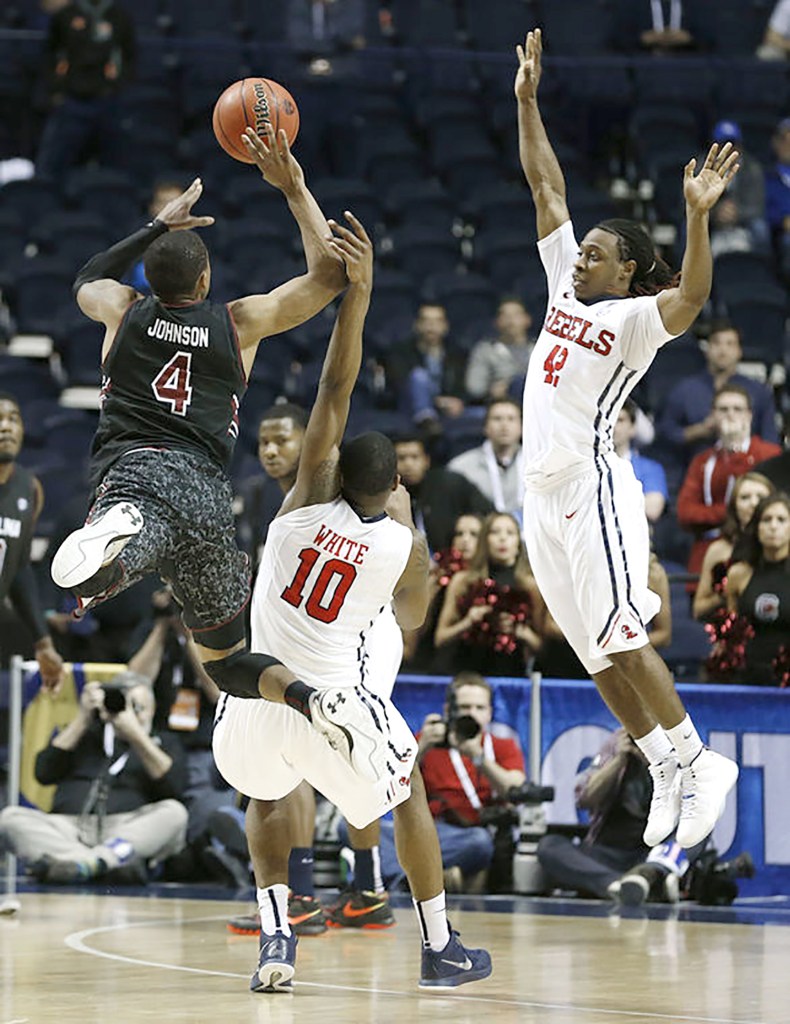 But this much is certain: Ole Miss’ time at the Southeastern Conference Tournament is over — and its hopes of getting an invite to the NCAA Tournament may be, too.

The Rebels (20-12) were bounced from the conference tournament with a 60-58 loss to No. 11 seed South Carolina  (17-15) late Thursday night at Bridgestone Arena, but that doesn’t begin to tell the story.

Jarvis Summers wiped away a forgettable 39 minutes and change for he and his teammates with a four-point play to give Ole Miss a one-point lead with 3.3 seconds left. But a crazy ending got even more mind-boggling when LaDarius White was called for a foul on Tyrone Johnson, who rushed to get up a shot from the 3-point line as the final seconds ticked away.

The whistle halted a celebration that had started to erupt on the Rebels’ bench and brought a mixed chorus of cheers and boos from the Ole Miss and Carolina faithful in attendance. Johnson caught the ball running away from the Gamecocks’ basket just like the Rebels wanted, but White picked up a sprinting Johnson at half court and, as replays showed, had his hand interlocked with Johnson’s right arm as he tried to shoot with less than a second left.

“Our whole premise was just make them catch it going toward our basket,” Ole Miss coach Andy Kennedy said of the final play. “That’s what we did. … You figure 3 seconds, you’re probably going to have to guard a couple of dribbles. Don’t let them lean into you. Don’t let them flop into a foul. Just run beside and try to make them score over the top, and unfortunately, we didn’t get it done.”

White didn’t think there was enough contact to warrant a call.

Said Johnson, “I saw him coming in hard. I just jumped up, and he fouled me.”

Kennedy didn’t lean either way when asked if it should’ve been called.

“It doesn’t matter what I think,” Kennedy said.

Ole Miss put itself in that position by playing one of its worst games of the season at a time when it could least afford it.

Projected as either a double-digit seed or as one of the last four teams in the NCAA Tournament field having to play in a play-in game by many national pundits entering Thursday, Ole Miss shot just 30.2 percent from the field — only the 29.8 percent it shot against TCU back in December was worse this season — and coughed up possession after possession with a season-high 21 turnovers on the way to its fourth loss in the last five games.

Summers, who scored 15 points, was responsible for six of those turnovers, and Stefan Moody (8) combined to go just 5 of 25 from the field until Summers hit the tying 3 from the corner and got fouled on Ole Miss’ final possession. Moody’s lone three-pointer gave Ole Miss its first lead since its opening basket of the game at 52-51 with 2 minutes left, but he missed 12 of his 15 shots.

White was by far the most efficient player for the Rebels, knocking down four 3s on eight attempts from the field and sinking all five of his free throws for a game-high 17 points, but none of that mattered after a loss punctuated by a fateful call.

Carolina never pulled away because it was equally bad on the offensive end, hitting just 30.4 percent of its shots. The Gamecocks, who led by as many as 10 in the first half and nine in the second, also missed their only three free throws of the second half in the final 24 seconds to leave the door open for Summers’ heroics before the final call was made.