IN OR OUT?: Bubble losses help Ole Miss cling to NCAA life 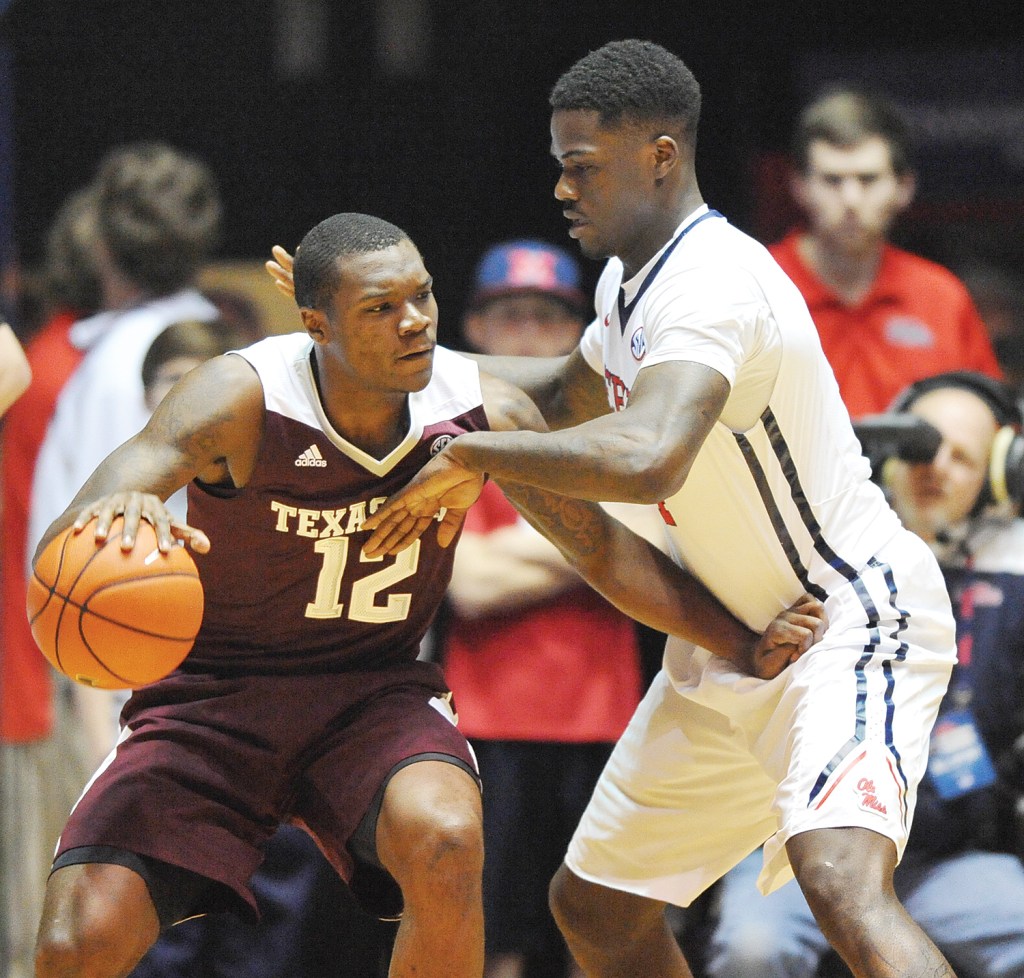 Texas A&M’s Jalen Jones (12) and the rest of the Aggies, who also lost to Ole Miss back on Feb. 4, are one of many bubble teams that had quick exits in their respective conference tournaments, but the Rebels will have a long day of waiting to learn their postseason fate. (Bruce Newman)

As ugly as the first 39 minutes and 57 seconds were for the Ole Miss men’s basketball team in its Southeastern Conference Tournament game against South Carolina on Thursday, it looked as if Jarvis Summers’ improbable four-point play was going to save the Rebels and possibly lock them into the NCAA Tournament in the process.

Then the final 3 seconds happened, and where Ole Miss goes from here is anybody’s guess.

“We were real excited when Jarvis made that four-point play,” Ole Miss coach Andy Kennedy said. “We’re not so excited now.

“For a team that has as many upperclassmen as we do and as many minutes that have been logged, our awareness failed us at times (this season). And as a result, it’s got us in this precarious situation.”

Ole Miss will be profusely sweating it out until the Rebels see — or don’t see — their name pop up on the board when the field of 68 is announced tonight starting at 5. But Kennedy and his players have gotten some assistance by virtue of other bubble teams around the country not being able to take care of their business either.

Before the Rebels (20-12) even took the floor at Bridgestone Arena, Texas A&M (20-11) was the second victim of No. 13 seed Auburn’s out-of-nowhere run in Nashville, Tennessee. It was a sub-100 RPI blunder that’s got the Aggies on the outside looking in, according to the latest tournament projections by bracketologists Joe Lunardi (ESPN), Jerry Palm (CBS Sports) and Shelby Mast (USA Today).

Illinois (19-13) also lost Thursday and looked bad doing it against an average Michigan team in the Big Ten Tournament. Texas (20-13) missed a golden opportunity against No. 13 Iowa State in the Big 12 Tournament. Old Dominion (24-7) was upset by Middle Tennessee State in the Conference USA Tournament in what’s likely going to be a one-bid league.

Miami (21-12) lost the same time Ole Miss did Thursday, missing out on a chance to add a third top-50 RPI win to its resume against No. 11 Notre Dame in the Atlantic Coast Conference Tournament. UCLA (20-13) couldn’t beat No. 7 Arizona in the Pac-12 semifinals Friday while Auburn bounced LSU and Wyoming upset Boise State.

LSU, which is 13-5 against the RPI top 100, and Boise State, the Mountain West Conference regular-season champion, may be in regardless, but an Ole Miss team that needs help is getting plenty of it. Lunardi, Palm and Mast each had the Rebels as one of the last four teams in as of Saturday night.

“We just have to wait and see what the other teams that are in the equation have done,” Kennedy said minutes after Thursday’s loss.

But all the news hasn’t been good this weekend.

Wyoming shrank the bubble by one by earning the Mountain West Conference’s automatic bid with a win over San Diego State in Saturday’s tournament final. Rhode Island was also a threat to steal an at-large bid but was ousted by Dayton in the Atlantic 10 semifinals, and Auburn’s Cinderella run ended with a thud in a 91-67 loss to No. 1 Kentucky.

Now the attention turns to the American Athletic Conference Tournament, where UConn is a real threat to possibly all but end Ole Miss’ chances of getting in. The defending national champion had just 17 wins in the regular season but will be NCAA bound if it can knock off SMU on its home floor today to win the AAC Tournament title.