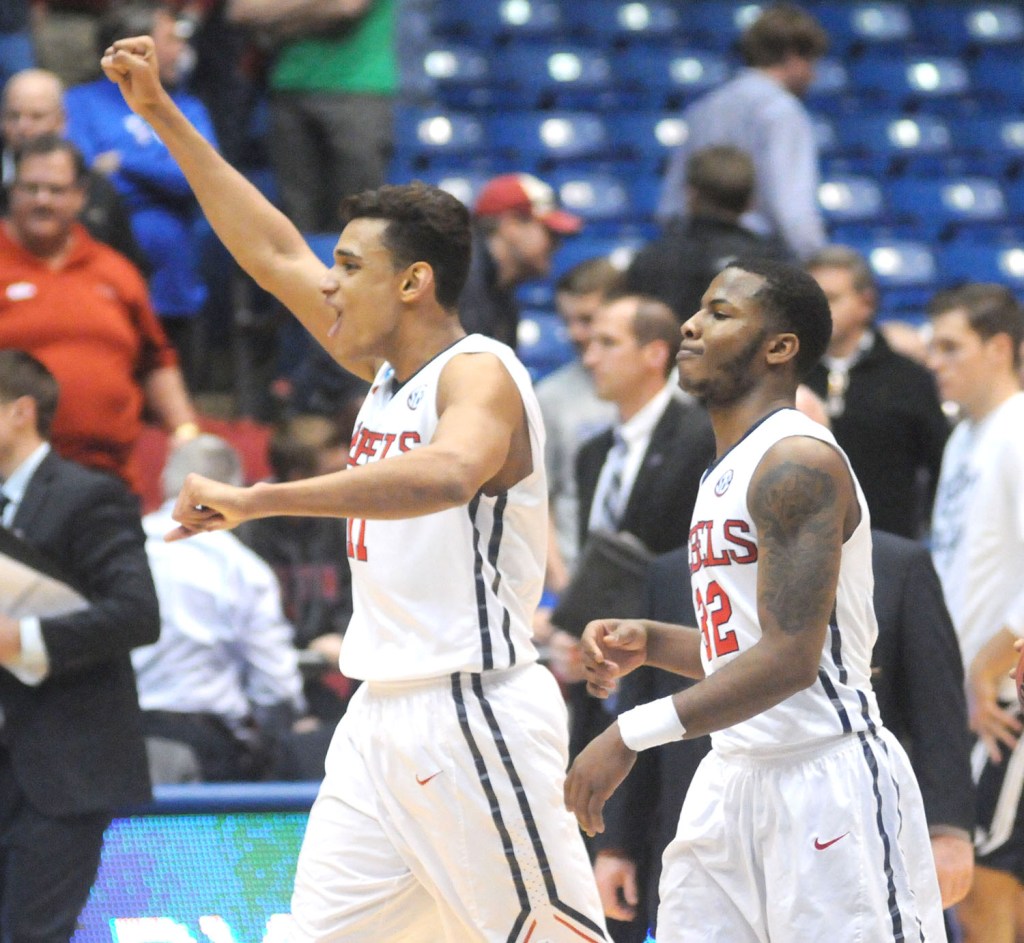 Ole Miss forward Sebastian Saiz (11) celebrates the Rebels' 94-90 victory over BYU in the opening round of the NCAA Tournament at the the University of Dayton Arena in Dayton, Ohio on Tuesday. Ole Miss rallied from 17 points down for the victory. (Davis Potter)

The Rebels poured in 62 points in the final 20 minutes to erase a 17-point halftime deficit and advance in the NCAA Tournament with a 94-90 victory over BYU in the First Four at the University of Dayton Arena on Tuesday.

Ole Miss earned the 11th seed in the West Regional and will turn around Thursday to play No. 6 Xavier in Jacksonville, Florida, at 3:10 p.m.

The Rebels (21-12) used six double-figure scorers — the first time that’s happened all season — to survive a barrage of 3-pointers from BYU (25-10), which came in as the nation’s second-highest scoring team at 83.6 points per game. Ole Miss had hit more than 41 percent of its shots just once in its last six games but made 45 percent (36 of 80) against the Cougars.

Stefan Moody led Ole Miss with 26 points, going back and forth with the nation’s third-leading scorer in senior guard Tyler Haws, who tied a season-high with five 3s and finished 13 of 23 from the floor for a game-high 33 points. BYU made 15 3s in all and shot it at a 48.3-percent clip.

Forward M.J. Rhett scored 14 of his career-high 20 points in the second half. Jarvis Summers had 11 while LaDarius White, Sebastian Saiz and Martavious Newby each chipped in 10. Chase Fischer and Skyler Halford added 23 and 11 points, respectively, for BYU.

The Rebels trailed 49-32 at the break and didn’t lead until Moody buried a 3 in transition to cap a 38-19 run to start the second half and put the Rebels up two with 7:45 left. The teams then traded baskets until another 3 from Moody put the Rebels ahead for good at 85-82, and Moody found White underneath for a layup following a BYU turnover to push the advantage to two possessions with 1:30 remaining.

“I was just trying to make plays,” Moody said. “Coach challenged us to make plays and come back in the second half. Those are some of the big shots you’ve got to make.

“We could’ve sulked about (the halftime deficit), came back out, and it would’ve just got worse. But AK challenged us, and we responded.”

Haws’ final 3 closed the gap to 93-90 with 5 ticks left, but Summers hit the second of two free throws to make sure Ole Miss would be moving on.

BYU made 285 shots from beyond the arc in the regular season and through its conference tournament and didn’t miss many it took early. Haws missed just four of the 12 shots he took in the first 20 minutes while Fischer was 5 of 7 with the duo combining for seven of the Cougars’ 10 first-half 3s.

BYU made just half that many in the final 20 minutes against the Rebels’ continuous mixture of their 1-3-1 trap and zone and man defenses, and Ole Miss knocked down 60 percent (24 of 40) of its second-half shots to erase its largest halftime deficit of the season.

“The feel of the gym tonight was that this thing was getting away from us and we needed somehow to control it,” BYU coach Dave Rose said. “They were just too good in the second half.”