Ole Miss tightens up, gets physical to extend season 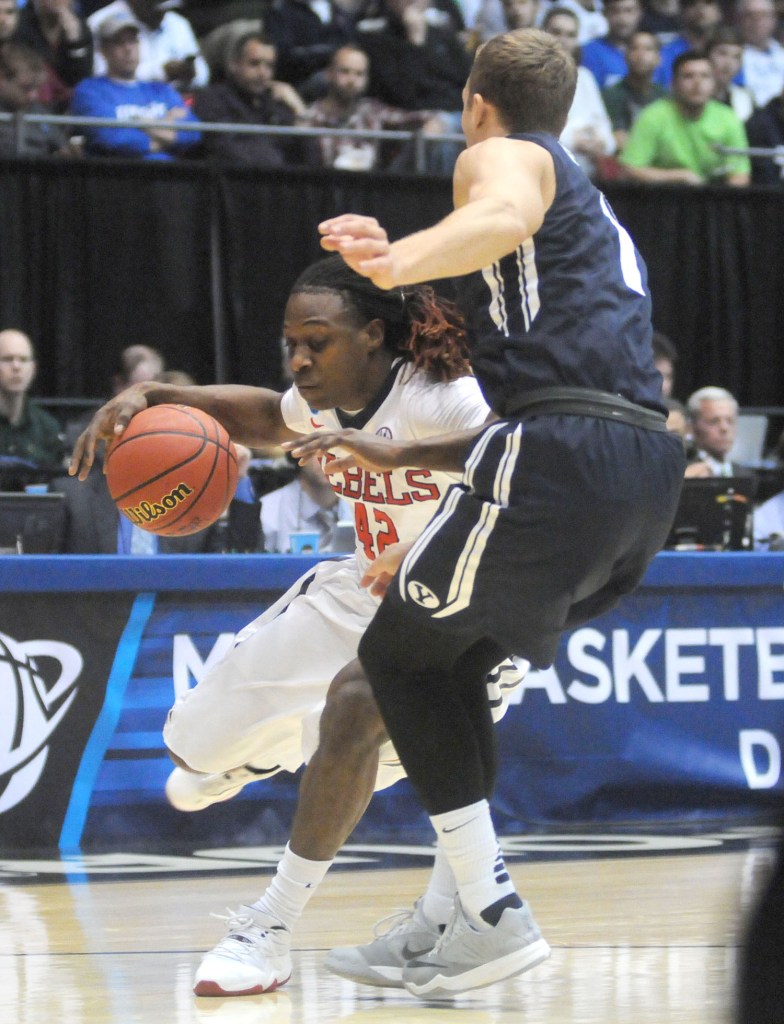 Ole Miss guard Stefan Moody (42) drives against BYU’s Chase Fischer during an NCAA Tournament game Tuesday at the University of Dayton Arena in Dayton, Ohio. The Rebels scored 62 second-half points to rally for a 94-90 win.

DAYTON, Ohio — One part of the equation was obvious. The other part? Not so much for anybody that’s followed Ole Miss basketball this season.

The Rebels had to get some stops if they wanted any chance of pulling off one of their biggest comebacks of the season against BYU on Tuesday and prevent themselves from going one and out in the NCAA Tournament.

They also had to start making some shots on the other end to cut into a 17-point halftime hole. Once Ole Miss figured out it could increase the odds of putting the ball in the basket by imposing its will inside, the Rebels went to work.

Ole Miss has never been mistaken for a team that overwhelms opponents on the interior, but BYU was no match down low. The Rebels outscored BYU 42-12 in the paint with 30 of those coming during their 62-point second half.

“We wanted to attack the paint as much as we could,” said forward M.J. Rhett, who tallied a career-high 20 points by the time he was done. “Our jump shot wasn’t falling today until the second half, so we kept trying to keep attacking. Attack, attack, get to the rim, and that’s what we did. We were relentless.”

Ole Miss’ big three of Stefan Moody, Jarvis Summers and LaDarius White accounted for more than half of the 2,324 points the Rebels scored entering Thursday’s game, and they made their contributions. Moody broke out of his recent funk to go blow for blow with BYU guard Tyler Haws, going 10 of 18 from the field and 5 of 9 from 3-point range for a team-high 26 points. Summers got key buckets late and dished out 10 assists to go along with his 11 points, and White made four of his 11 shots.

But Ole Miss needed more than that to keep up in a track meet with the hot-shooting Cougars.

The BYU defense that didn’t have to extend in the first half — the Rebels shot just 30 percent in the first 20 minutes — did in the second as Ole Miss heated up. The interior opened up as a result, and the Rebels started feeding the 6-foot-9 Rhett, 6-9 Sebastian Saiz and 6-9 center Dwight Coleby, who had to make some adjustments of their own to combine for 33 points.

“The first half, we were trying to see what could we do?” Saiz said. “At first, I went baseline and I couldn’t do it because the help was coming from that side. For the next time, I had to go (to the) middle. We just learned from the first half and stepped up in the second half.”

Ole Miss wasn’t sold on BYU’s bigs being challenged much playing an up-and-down style in a mid-major conference that doesn’t offer much physicality. The Rebels saw the likes of Kentucky’s Willie Cauley-Stein and Karl-Anthony Towns, LSU’s frontline tandem of Jordan Mickey and Jarell Martin and Georgia’s Marcus Thornton as they went through their Southeastern Conference slate and felt like they could take the fight to the Cougars inside.

“We’re an SEC team,” Saiz said. “It’s all about being physical and toughness. That’s what we tried to do the whole game.”

BYU’s hot hand from the outside forced Ole Miss to go man more often in the second half. The Rebels switched on all screens to stay as close as they could to Haws and rest of the Cougars’ shooters, and Ole Miss coach Andy Kennedy had to go with some different personnel to do it.

“We started (Aaron Jones) and Anthony Perez at the 4 and 5 (in the second half) because Sebas and Coleby were having a hard time being in man-to-man,” Kennedy said. “They couldn’t switch off.”

The move helped Ole Miss get the stops it needed, and the blend of inside and outside scoring took over from there. The Rebels were plus-4 on the glass (43-39), scored 16 second-chance points to BYU’s four, and the drives into the paint by Moody and Summers as the second half wore on resulted in easy layups and dunks for the bigs.

“They’re really big, and a lot of those points in the paint were just the fact we couldn’t stay in front of them,” BYU coach Dave Rose said. “There were just really quick.”