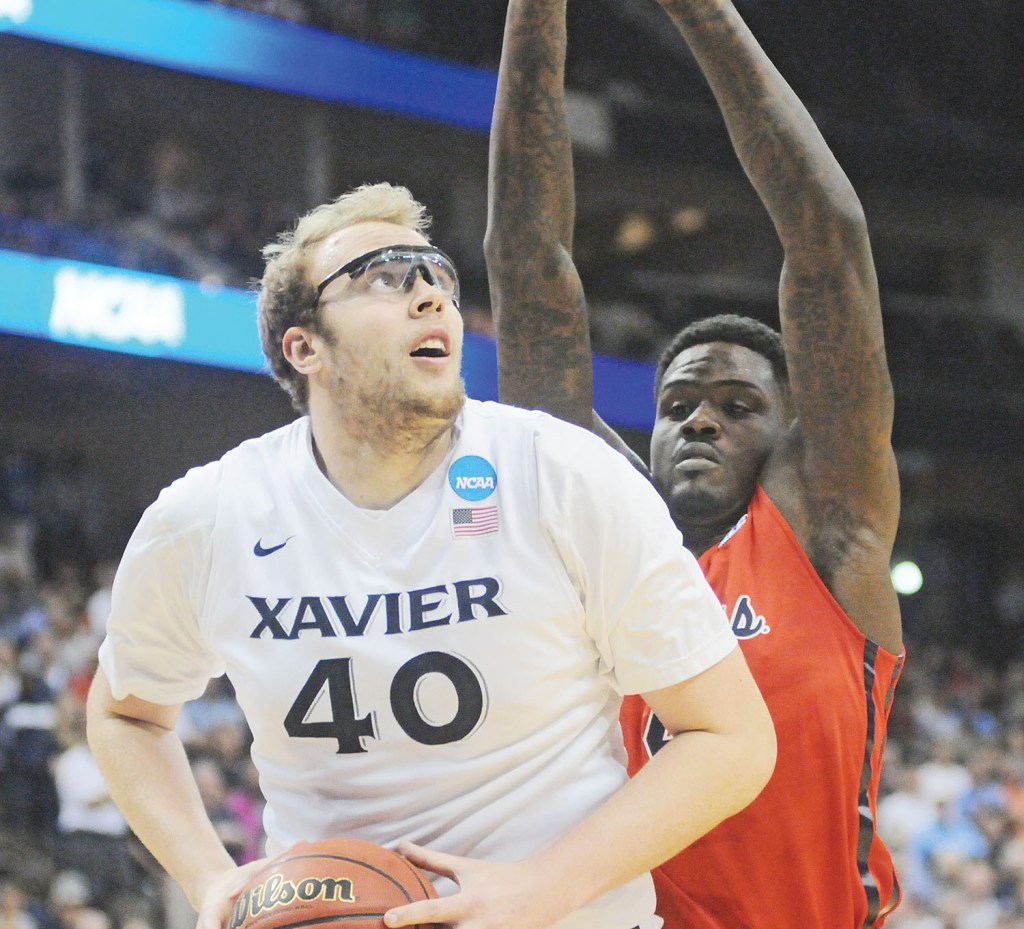 Xavier center Matt Stainbrook (40) is defended by Ole Miss forward M.J. Rhett (4) in the NCAA Tournament at Veterans Memorial Arena in Jacksonville, Florida, on Thursday. Stainbrook went 8 of 10 from the field and finished with 20 points in Xavier's 76-57 win. (Davis Potter)

But they all came away with the same overriding thought: Xavier’s center isn’t your typical big man.

“We haven’t seen anybody like him,” Kennedy said after the Musketeers ended Ole Miss’ season Thursday with a 76-57 victory, at Jacksonville’s Veterans Memorial Arena.

Stainbrook had plenty to do with it.

From his Horace Grant-like eyewear to his imposing size — he’s listed at 6-foot-10 and 270 pounds, but Rebel players had differing opinions about just how large he was — to his fundamental skill set, Stainbrook has a unique look to go with a unique game.

Said fellow forward Aaron Jones, “I’ve never seen a 7-foot-1 guy that’s 270 that would go to his left hand. Coming into the game, I didn’t think he was going to do as much as he did.”

The plan, everybody said, was to make Stainbrook catch the ball outside the paint and make his looks tougher. But with Dwight Coleby and M.J. Rhett being the biggest bodies on Ole Miss’ roster at 240 pounds each, it was a difficult strategy for Ole Miss to execute.

The Musketeers’ senior center used his body to post up the Rebels’ bigs deep in the lane all afternoon. Once he got the ball, there wasn’t much Ole Miss could do to keep the left-handed Stainbrook from going to his strong side to finish.

He took 10 shots, most of them just a couple of feet from the basket, and made eight of them. He hit all four of his free throws to finish six points shy of his career-high with 20, and he finished just one rebound short of a double-double.

“My frustration was the scouting report and allowing him to get to his strong hand every single time,” Kennedy said. “It’s easier said than done. He’s good at it.”

Said Jones, “It just surprised me that he kept going to his left hand and scoring that easy.”

Stainbrook also made the Rebels pay when they gave him too much attention. He stood along the baseline against Ole Miss’ half-court trap and found open cutters when the Musketeers broke it, and he kicked the ball out to shooters when the Rebels collapsed in a zone or doubled down in man.

“It’s difficult because they was getting a lot of scoring in the low post from (Stainbrook), and then whenever we tried to double-team him, he’s got a good IQ for the game and was just passing out to the guards. They was making shots,” Jones said.

His team-high five assists helped Xavier knock down nearly half of their 3-point shots (10 of 23) and knock Ole Miss out of the NCAA Tournament.

“He’s got a huge body,” Saiz said. “It was really tough to guard him.”