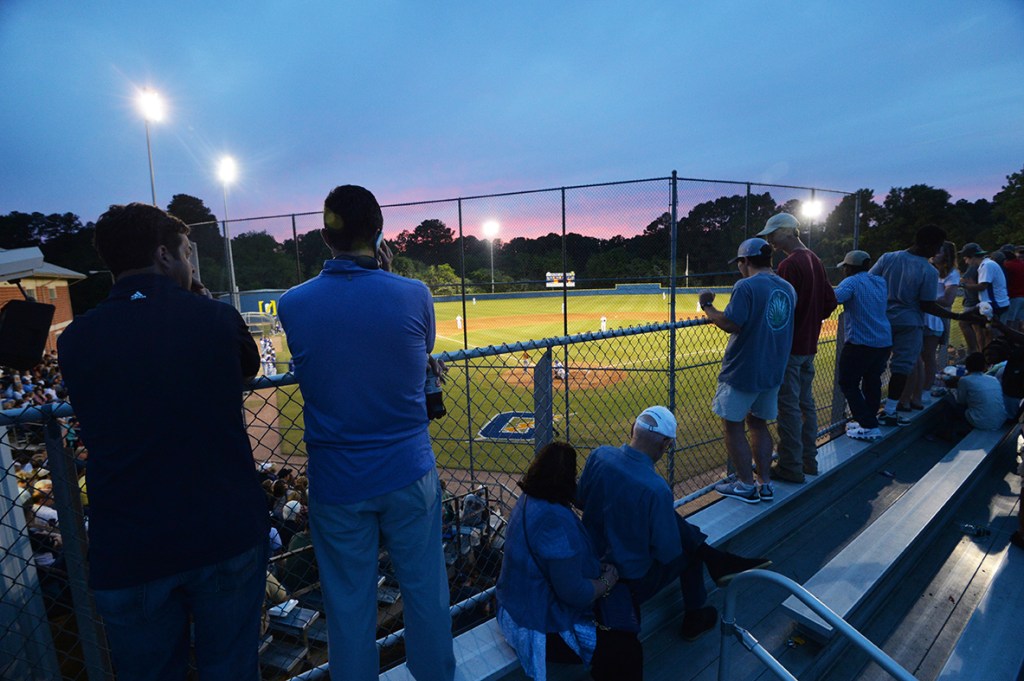 Fans watch Oxford take on New Hope in Game 1 of the MHSAA Class 5A North Half championship series last week at Edwin Moak Field. Charger fans have witnessed one of the best seasons in school history, including the first-ever undefeated regular season. (Thomas Graning)

It bothered Jason Barber to some extent that Oxford wasn’t able to celebrate in New Hope.

After watching the Trojans dog pile on Oxford’s field a year ago after winning the MHSAA Class 5A North Half title, Barber wanted to return the favor at their place.

But as the Chargers’ right-handed ace looked around Edwin Moak Field Saturday night after Oxford’s series-clinching win in this year’s rematch and saw hordes of fans sticking around to share the moment, none of that mattered.

“All the support here,” Barber said, “there’s nothing else like it.”

Oxford has given its fans plenty of memorable moments throughout a memorable season.

“It’s been really amazing,” said Carolyn Kessinger, who has spent the season following the team everywhere it goes with her famed husband, Don, a former Ole Miss All-American and MLB All-Star a few decades back.

The Kessingers are grandparents to Grae, the Chargers’ starting shortstop, and Chase, a sophomore biding his time amidst one of the most talented rosters in the state. They’ve witnessed what may be the best season in program history.

Oxford will try to capture just its second-ever state championship when the Chargers take on George County in the state title series beginning Tuesday at Trustmark Park in Pearl. The only team to do it so far is the 2005 bunch, and those Chargers lost four times before winning it all.

This year’s squad has one blemish in 34 games.

Oxford won its first 27 games to pull off the first undefeated regular season in school history and made it 32 straight until New Hope nipped the Chargers on Will Godfrey’s solo homer in Game 2 of North Half to end the perfection. Nearly one-third (10) of Oxford’s wins have come by way of the 10-run mercy rule.

“It’s such a phenomenal season,” Carolyn said. “I’ve been in the game 50 years, and I’ve never been with an undefeated team before. This is awesome.”

Oxford has kept its fans on the edge of their seats with some close calls.

The Chargers needed eight innings to beat Cabot, Arkansas, over spring break and used a walk-off hit from Houston Roth to edge Lafayette, 2-1, in the 10th game of the season. Ben Bianco’s two-run home run in the seventh gave Oxford a 5-3 win over West Point in early April, and New Hope took Oxford to eight innings in two of its five losses to the Chargers.

“Not lots (of nail-biters), but a few of them,” said Sally Rychlak, one of Oxford’s senior Diamond Girls.

The Chargers’ ability to pull out those kind of games more times than not has made all the winning that much more impressive for those in attendance.

“I think that’s been part of the excitement,” said Mark Finn, the father of reserve freshman infielder Matthew Finn. “The thing that I’ve enjoyed being in baseball has been even when they’re down, they don’t seem to get rattled. That’s that maturity process of where they don’t get too tight and they’ve been able to overcome and take advantage of any kind of mistake the other team makes, which is the way you win baseball games.”

But nothing has topped the Chargers’ latest dramatic victory for their followers. Oxford’s first loss nearly came a game earlier against New Hope in Tuesday’s North Half opener, but Bianco’s two-out walk-off bomb gave Oxford a 3-2 win.

“It’s hard to beat Tuesday night with a walk-off home run when you’re down by a run,” Mark said.

Said Carolyn, “Oh my gosh, that last (walk-off) home run. That was awesome.”

Don Brooks, the voice of the Chargers for Bullseye 95.5 FM, has been calling Oxford baseball games full-time for five seasons. For him, only the call of former first baseman Chad Cregar’s grand slam against Petal in the ’05 state finals rivals Bianco’s blast.

“The win in Game 1 against New Hope is the funnest game I’ve ever done, and this season by far has been the most fun,” Brooks said.

With three Ole Miss commits and a pair of junior college signees on the roster, fans knew this year’s version of the Chargers had the talent to win big. But the idea of witnessing history was hard to fathom until it actually happened.

“I feel like maybe halfway through,” fellow senior Diamond Girl Lilli Alford said of Oxford’s spotless regular season. “We’re at 34 games right now, and once you get to kind of the halfway point and you’ve played enough teams, you’re like, ‘Wow, we’re really good.’”

Each passing win brought more fans to Edwin Moak Field, which was overflowing last week. The Chargers hosted the first and third games against New Hope with each game drawing more than 1,000 spectators.

“From the administration to the people who it was their first time to come, this atmosphere was absolutely electric,” Oxford coach Chris Baughman said. “I can’t thank the community enough, and I appreciate it very much because our kids deserve every bit of it.”

There’s just one more outcome the Charger faithful are rooting for before what Carolyn described as “a crazy ride” comes to an end.

“I want them to win state,” Carolyn said. “The streak was not nearly as important to me as winning state, and I feel like the young men feel the same way.”

Said Brooks, “I think they’re going to win it all.”