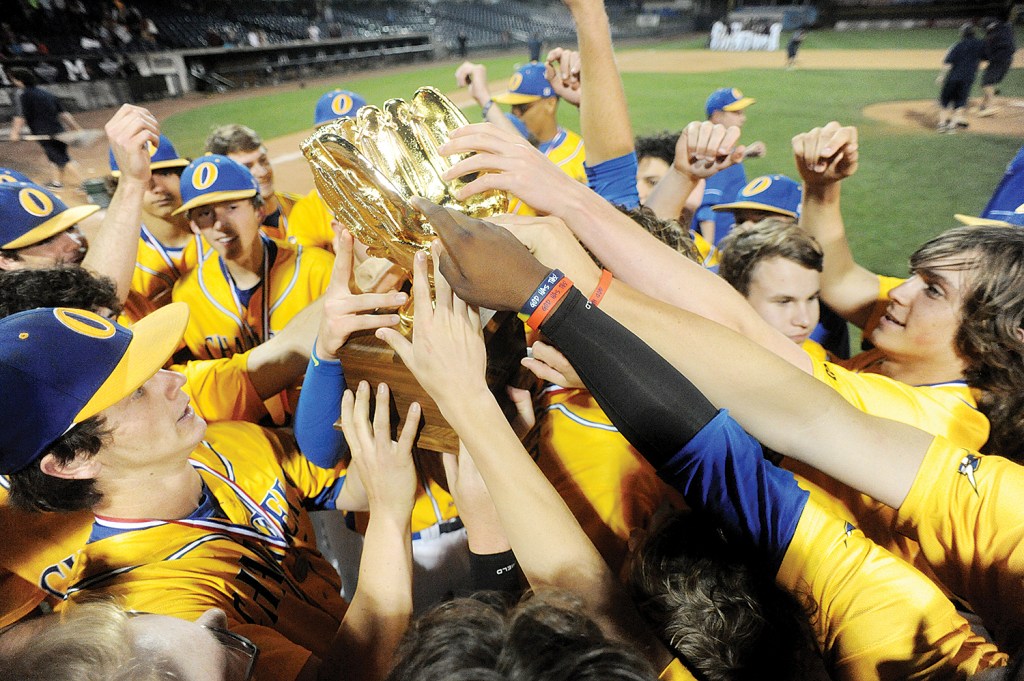 Oxford baseball players hoist the MHSAA Class 5A state championship trophy following their win over George County on Thursday at Trustmark Park in Pearl. A talented roster and a year’s worth of disappointment fueled the Chargers to their second title in program history. (Bruce Newman)

When Grae Kessinger fielded Cameron Schultz’s grounder and threw across for the final out, the mission was accomplished.

Oxford’s 9-0 pasting of George County on Thursday earned the Chargers the MHSAA Class 5A state baseball championship and finally extinguished the flames of disappointment that had been blazing for a year. Ever since New Hope prevented this from possibly happening for the Chargers last season in the North Half finals, Oxford’s had one job.

“We had to sit there and watch New Hope dog pile on our field, and (our players) said, ‘It’s not going to happen,’” Oxford coach Chris Baughman said. “And they didn’t let it happen.”

The Chargers were constantly reminded of the ultimate goal with a little help from social media.

Logan Dodson, who just finished his second season as an assistant on Baughman’s staff, came up with a season-long rallying cry during an offseason workout in January. The team took a post-workout photo that coaches were going to post to the team’s official Twitter account, @OxfordBaseball1.

But Dodson (@loganwdodson) wanted something to go with it.

Chase Goolsby (@Chasebg8), a fellow assistant who runs the account, added the hashtag #JOB to the tweet before sending it out. A hashtag is a word or phrase preceded by a pound, or hash, sign that is used to identify tweets on a specific topic.

“I told Goolsby, ‘Why don’t you put #JOB on it to kind of joke around?’” Dodson said.

Players and fellow coaches were confused at first. Every time they logged on to Twitter and saw those three letters accompanying a tweet, they weren’t sure what they were seeing.

“It was one of those things that at first, I didn’t even know what it was,” fellow assistant Daniel Parrish (@jdparrish15) said.

Said senior outfielder Matthew Guyton, “No one really knew what it meant.”

The three letters meant finish the job. They were also a built-in acronym for the final destination after Oxford fell a step short of the state championship series a year ago: Jackson or bust.

“They were like, ‘What does that mean, #JOB?’” Dodson said. “Then I kind of told them one by one, and it eventually started catching on. They started showing everybody. It was a secret that kind of spread real fast.”

Coaches and players began including it in their tweets, and students and fans joined in once the season began. It soon became rare to find any tweet about Oxford baseball not including the hashtag. Fans took it a step further, printing the hashtag on T-shirts and plastering it on banners.

Even people following the Chargers’ season from afar picked up on it. 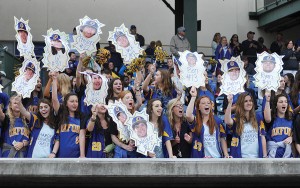 Oxford fans and students caught on to the social media craze, cheering the Chargers on with homemade signs, banners and T-shirts. (Bruce Newman)

“(Players) were tweeting that,” Dodson said. “Then it picked up followers and just started rolling man.”

Guyton (@MatthewGuyton1) and senior first baseman Drew Phillips (@Drewphil10) both frequently use Twitter. They didn’t need social media as a source of motivation, but the constant tweets popping up on their respective timelines never let them forget about the main objective.

“It just kept me focused more than anything,” Phillips said. “That was our ultimate goal. An undefeated season, that would’ve been nice, but a state championship was it. That’s what we wanted.”

But a rallying cry going viral? That’s more than anyone could’ve imagined.

“I was kind of surprised with how big it got with the student body and the school and stuff,” Guyton said. “They really enjoyed using it. It was just a lot of fun.

“It took a while for it to stick on, but it’s just kind of been our theme for the year, Jackson or bust. We made it.”

Oxford’s baseball account now has more than 500 followers. A tweet sent out at 11:06 Thursday night after the title-clinching win was simple: #JOB, accompanied by a graphic containing the team’s accomplishments.

As of Saturday night, it had been retweeted 31 times and favorited 37 times.

“These kids were hungry. They were hungry from the moment we started this thing,” Parrish said. “They went through the playoffs and were hungry every day. It was a different person every day that came up with the big pitch or the big hit. Job complete.”