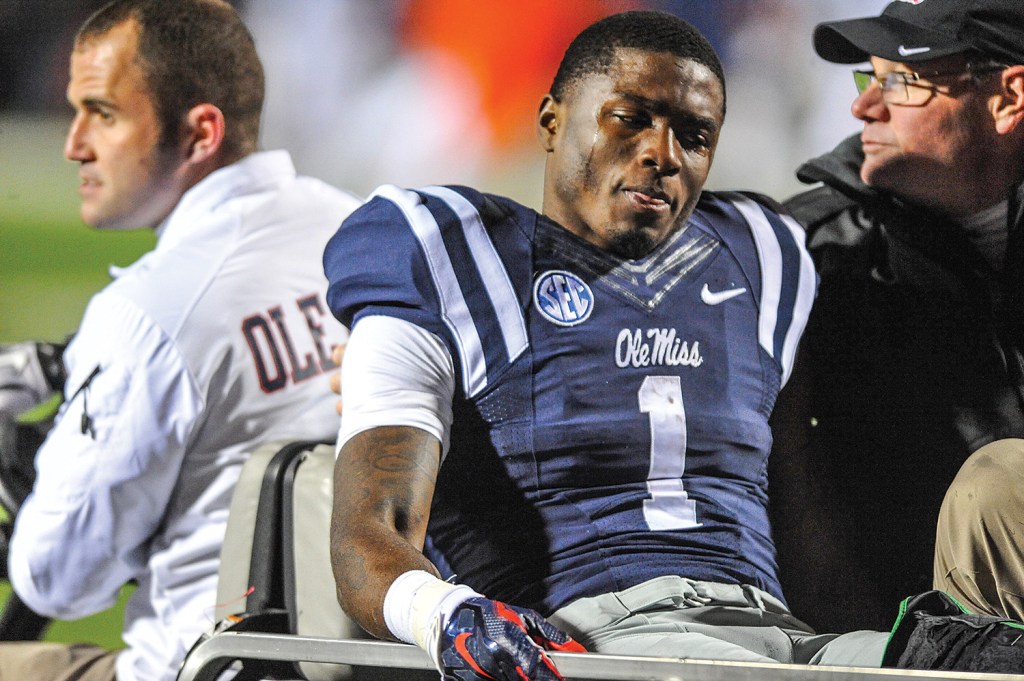 Ole Miss’ Laquon Treadwell (1) is carted off the field after suffering a broken fibula and a dislocated ankle against Auburn on Nov. 1 at Vaught-Hemingway Stadium. Rebel coaches and players admit losing their star wideout — and the game — was something they never really recovered from as Ole Miss fell out of the playoff picture in the final month of last season. (Bruce Newman)

Nine months later, Ole Miss’ coaches and players still talk about it like an open wound that just won’t heal.

Ole Miss’ 2014 season was transpiring at a historic rate until its momentum came to a screeching halt in early November. Laquon Treadwell seemed destined to weave his way to the Rebels’ eighth win in their first nine games, taking a screen pass and rumbling toward the end zone for the go-ahead touchdown against Auburn with just seconds left.

Most know by now he never made it.

Auburn linebacker Kris Frost caught Treadwell from behind, grabbed a handful of jersey and held on for dear life. Treadwell’s left leg gave way under the weight of Frost’s body and eventually snapped, causing Treadwell to drop the ball inches away from the goal line as the shock jolted through his body.

The Tigers recovered the loose ball in the end zone and hung on for a 35-31 win in a matchup pitting the third- and fourth-ranked teams in the College Football Playoff rankings at the time. Treadwell’s season was shot, and so were the Rebels’ national title aspirations.

“That took a lot out of us given everything that that game stood for at that time and everything that we were working for,” Ole Miss senior linebacker C.J. Johnson said. “To lose any player would hurt definitely, but to lose a guy like ‘Quon, that was something that was tough for us to bounce back from.”

Ole Miss suffered its first loss the previous week when the offense couldn’t pick up the nation’s top-ranked scoring defense in a 10-7 setback at LSU, but the Rebels picked themselves up to go blow-for-blow with Auburn’s high-octane offense before everything stopped once Treadwell stayed sprawled on the Vaught-Hemingway Stadium turf writhing in pain.

“For it to happen like it did, adversity is certainly a teaching tool, but that next week, I don’t know,” head coach Hugh Freeze recalled. “I tried everything in the world, but I didn’t sense that we could rebound from it. … It took a lot out of us, both emotionally and big picture-wise from the scores on the scoreboard to losing the game and one of your best players.”

As much as Ole Miss wanted everything to be the same, it wasn’t. The Rebels lost the play-making ability of one of the nation’s top wideouts and struggled to replace the energy and encouragement of one of the most charismatic players on the roster.

Defensive back Mike Hilton, then a junior, said he along with tight end Evan Engram and others tried to fill that perky void, but it was tough to do.

“Throughout practice, everybody was just kind of down because ‘Quon is really like one of our energy guys,” Hilton said. “He’s always hyped at practice. You could tell it wasn’t the same.”

Ole Miss overwhelmed FCS foe Presbyterian the following week before getting the favor returned in a six-turnover, 30-0 drubbing at Arkansas following a bye week. A 31-17 win over rival Mississippi State provided some relief, but TCU capped the Rebels’ late-season swoon by slapping the Rebels around in a 42-3 thrashing, handing Ole Miss its fourth loss in its final six games.

But football seasons rarely come and go without bouts of adversity, and players are vowing to handle it better than they did a season ago — starting with things they can control. Freeze and his players didn’t dare take any credit away from Arkansas or TCU, but neither team saw the same Ole Miss squad that started 7-0.

“There’s a multitude of things that just sometimes you just don’t get the lucky bounce and the ball just doesn’t go your way,” Johnson said. “It’s just a matter of staying at it, just staying within the grind and just keep at it.”

That painful moment continues to be a learning lesson nearly a year later for the Rebels, who are aiming for consistency regardless of what they end up having to deal with this fall.

“That’s been a problem for us the last two years, not being able to finish,” Johnson said. “We’ve made that a focal point going into the offseason that we’re going to try to finish, and that’s what we’ve been working hard for.”

Said Hilton, “I feel like it made (Treadwell) stronger, but it also made us stronger. This year, I think we’re going to do something special.”