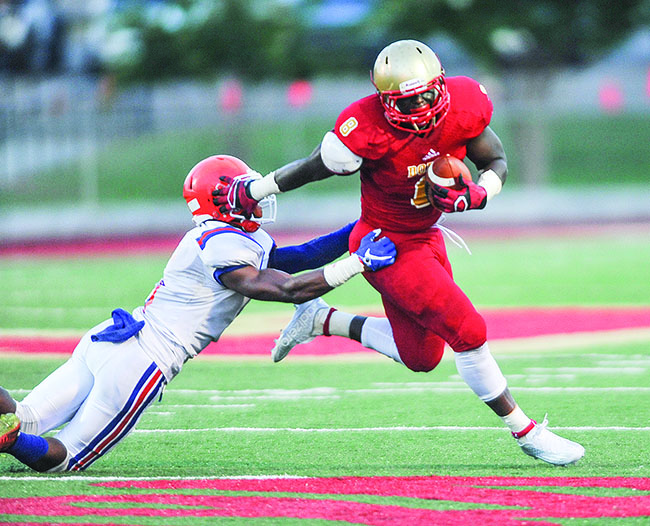 The Lafayette High football team will open its season against another Class 6A opponent. It just will not be Tupelo this year.

The Commodores will travel to Horn Lake to take on the Eagles at 7 p.m. Friday night. The game can be heard on Supertalk North MS 93.7 FM.

After facing and defeating Southaven, another 6A opponent, in its jamboree last Friday, the Commodores have momentum on their side and look to carry it over this week.

“Any time you play up in classification, it’s a challenge,” Lafayette coach Eric Robertson said. “That’s something we’re used to doing at Lafayette and something we want to do. We want to play quality football teams, and we think that helps us get prepared for region play and the playoffs. We want to give the fans good football games to come and watch.”

“(Horn Lake) looked really quick and fast (against Ripley),” Robertson said. “(Logan) is really quick and a good running back. (Randle) is equally as tough. Those guys are scary if they get in the secondary. … They are talented out on the edge with (Coleman). Offensively we feel like they’ve got some really good skill guys.”

For Lafayette offensively, Robertson liked what he saw from the film of the Commodores’ two-quarter scrimmage against Southaven. The running game was not as dominant, rushing for only 49 yards, but that was partly due to the game plan Robertson and the rest of the coaching staff put in place for the jamboree.

Going against a Horn Lake defense that Robertson said “ran to the football extremely well,” the Commodores will have a much more elaborate running scheme in place for running backs Tyrell Price and Tay Tay Owens.

“We were very vanilla against Southaven,” Robertson said. “We feel good about our running game. We had two different run plays (against Southaven) all night long. We didn’t scheme against anything they did defensively. It wasn’t where we wanted it to be Friday night, but we’ve worked hard on it and hopefully as the season goes, it will get better every week.”

Robertson said junior quarterback Will Ard, who will be making his first regular-season start for Lafayette, graded out well from his performance against Southaven. Offensive lineman Matt Toles injured himself during the jamboree, but Robertson hopes he can participate in the game Friday night.