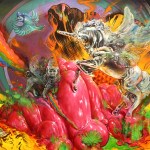 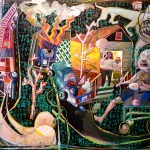 Southside Gallery is hosting a joint exhibition featuring works by Allan Innman and Spence Townsend. Innman’s series of paintings, titled “Flights of Fancy,” will be on view alongside Townsend’s “libretto” series now through Sept. 12. There will be an artists’ reception on Thursday, Sept. 3 from 6:30 to 8:30 p.m.

Allan Innman’s painting style has morphed as of late. His work has become more surreal, more fantastical. It no longer alludes to childhood make-believe only through its subject matter; his entire stylistic approach — scale, composition, color palette and so on — now effectively reproduces the interior landscape of a child’s imagination.

In his new series, called “Flights of Fancy,” he seeks to breathe life into the children’s toys that had been mere objects in his previous still-life works.

“Make-believe,” he said, “brought them all to life.”

Furthermore, he has begun to integrate a comic book aesthetic and narrative sensibility in his work, rendering it more illustrative than ever before.

While real-world referents are present in Spence Townsend’s latest series of paintings, “libretto,” they are distorted to the point of absurdity. The works encroach upon the realm of dreams and fantasies. They are “synesthetic re-imaginations” of bizarre tales, meant to unfold like a dream sequence, and meant to evoke the sense of unreality that can be felt through music, dreams and imaginings.

His distinct painting style, while invoking a “folk” aesthetic with its haphazard perspective lines and gestural brushstrokes, also pays close attention to the multidimensionality of space and form through careful composition and bold application of color.

Townsend received his Bachelors of Fine Art in painting and drawing from the University of Southern Mississippi in 2005. He is currently a master’s degree candidate and graduate instructor at the University of Georgia, and recently received a Merit Award at the 40th annual Lyndon House Arts Center in Athens, Georgia. He has had solo exhibitions at Jones Junior College in Ellisville at the Oddfellows Gallery in Hattiesburg and at the Pensacola Museum of Art in Pensacola, Florida.