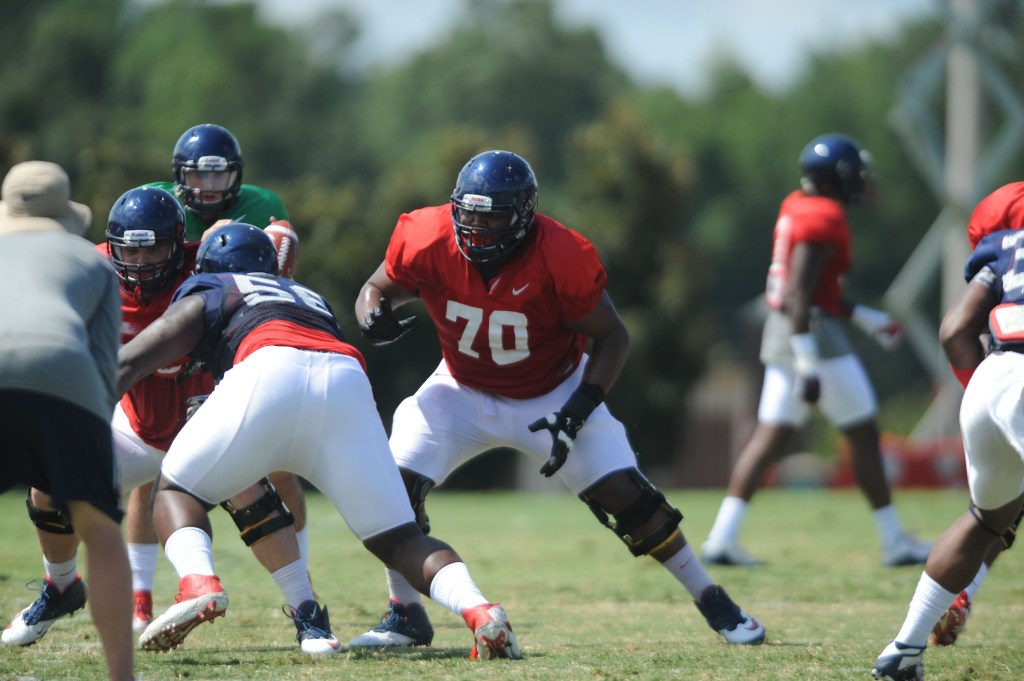 Jordan Sims signed with Ole Miss last February, but the offensive lineman didn’t have a realistic chance of playing in his first season.

And it had little to do with the depth chart.

Sims was a solid prospect coming out of Homewood (Alabama) High in last year’s recruiting cycle. Ranked as a four-star recruit by ESPN and selected to play in the 2014 U.S. Army All-American, the 6-foot-4 Sims has offers from around the Southeastern Conference, including the homestate Tide and Tigers.

But some schools offered Sims late as his weight continued to climb.

Sims eventually inked with Ole Miss and reported to campus last summer at 384 pounds, he said. His feet were light and the athleticism was there for a guard, but Sims needed a year in the Rebels’ strength and nutrition programs to shed the pounds in order to one day be as effective as Ole Miss’ coaches needed him to be on the interior of the line.

Sims has committed himself and is down to “about 330 now” with hopes of being closer to 320 by the time the season starts, he said. Most of the weight was shed by the end of spring practice when the redshirt freshman was named the team’s most improved offensive player.

“I felt like a real football player then,” Sims said while speaking with media members recently. “I was pulling a lot quicker and able to get my steps down. It didn’t feel like I had a 50-pound vest on most of the time. It was a big help, and it made it a lot more fun, too.”

Admittedly, Sims knew he was going to have to make a change once he got to college. The morning and afternoon workouts took care of the conditioning, and Sims followed a nutrition plan laid out by Ole Miss sports dietitian Frank Newell that focused on a smaller amount of food rather than the type of food Sims was eating.

“Really it was just portions. That was the biggest thing,” Sims said. “Just make sure I eat three solid meals a day and don’t skip any meals.”

Week by week, the pounds slowly melted away, and for the first time in his young career, Sims believes he’s in position to contribute on the field.

“I set small goals because I didn’t want to make too big of a jump too quick,” Sims said of his weight loss. “Frank Newell, he helped me out to just try to make small goals, and I kept reaching them.”

The slimmer Sims has been repping at both guards spots during camp, but most of his snaps have come at right guard where he’s been rotating with Justin Bell, the incumbent at that spot, Daronte Bouldin and fellow redshirt freshman Tyler Putman with Rod Taylor out with a torn labrum.

Sims knows any snaps he gets will likely come in a backup role, but he’s a lot closer to the field than he used to be.

“If I keep performing well, I think I’ll be able to see the field some this year,” Sims said. “It’s up to (offensive line) coach (Matt) Luke. He knows what’s best.”

Chargers start up against unfamiliar foe in Southaven