Marching band readies for the season 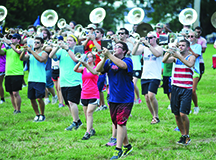 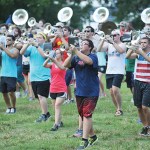 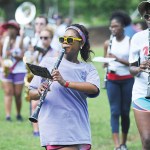 Graduate students were busy repairing the University of Mississippi’s marching band field Friday after an intense week of band camp.

The Pride of the South Marching Band had its full week of camp before Monday’s start of school to begin getting acclimated to one another and get well-versed on their lineups for this football season.

This years band will have about 316 students, including the Rebelettes (dance line), color guard (flags), horn line, drumline, twirlers and the drum majors.

Bill DeJournett, associate director of bands at UM, said after the various directors recruited constantly the past year at high schools and community colleges, it is exciting to have the students here practicing.

“The first two weeks of school we rehearse every day from 4 to 6 p.m.,” he said. “We work on the pregame, the opener for the first halftime show and the dance tune. When classes start we will work closer on the pregame show.”

The band averages about two performances a game, including away games. In addition to the performances, the band plays about 40 to 50 stand tunes during breaks on the field. DeJournett said the full band is at each home game, at the Egg Bowl versus Mississippi State and at the bowl game. Smaller pep bands will go to the other away games.

“They volunteer to go to the away games,” he said. “If more sign up than can go, it’s a selection process.”

While band is an academic course and if you show up on time each day you get an A, there are many more benefits to suiting up.

“Band is the easiest, best way to meet 300 other people a week before class even starts,” DeJournett said. “ This is my 19th year teaching and the people who wind up dropping out of school isn’t because of a problem academically. It’s the people who don’t make some sort of social con-nection.”

Some students continue with band their full two or four years at Ole Miss, but sometimes lab schedules in the junior and senior years interfere. Oxford’s Keenan Arntson is a junior who has stuck with band and starting her third year and is excited to be back.

“I’ve always loved the color guard,” she said. “Being in the color guard here at Ole Miss, it’s a big family. You meet people from other places and get culture.

It’s a sense of belonging. And even when everything else goes wrong, it’s a place you can still go.”

Layla Langdon, a freshman from Florence, said color guard is her life and she wouldn’t have her college experience be any other way.

“I’ve always wanted to be part of Pride of the South,” she said. “I’ve always been in band since my ninth grade year. It’s always been my family and I didn’t want to give it up.”

For students who want to keep playing even af ter football is over, there is a fall wind ensemble conducted by director David Wilson and four concert bands in the spring. Through the music depart-ment there also is two jazz ensembles and an orchestra.

“Band gives you a family and a sense of community,” DeJournett said.