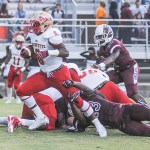 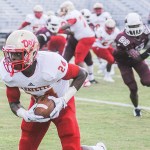 HORN LAKE — The Lafayette offense was challenged after last week’s jamboree win over Southaven. The Commodores answered that challenge in a big way Friday night.

The Commodores traveled to Horn Lake and defeated the Eagles, 34-7, in the season opener.

“I thought the offense played well,” Lafayette coach Eric Robertson said. “I’m just proud of us. Horn Lake really did nothing to stop us. We stopped ourselves with dropped balls or mistakes here and there. It’s exciting because I know we’re capable of making those plays.”

Senior running back Tyrell Price got his season — and the game— off to a quick start, scoring three rushing touchdowns in the first half to give Lafayette (1-0) a 21-0 lead at the half.

The first score capped off a six-play opening drive for the Commodores when Price ran in from two yards out at the 8:35 mark of the first quarter. He would score again on the very next drive, this time on an 11-yard run with 1:54 remaining in the opening frame.

Price’s hat trick was completed when scored on an eight yard run after Lafayette recovered a Horn Lake fumble the play before midway through the second quarter. He finished with 70 yards on 13 carries and three touchdowns.

“After last week I figured we’d do better,” Price said. “Last week in the jamboree we didn’t want to show too much on film. So, this week we came out and did what we had to do.”

Tay Tay Owens added 46 yards on on 7 carries and scored a 3-yard touchdown late in the third quarter.

It was a longer halftime than usual as storms in the area caused a 30-minute weather delay on top of the usual 15 minute break. The lengthy gap between halves did not slow down the Commodore offense as junior quarterback Will Ard connected with Rashuan Rockette on the first play of the half for a 25-yard touchdown pass.

Ard finished his first regular-season game as the Commodore’s starting quarterback completing nine-of-14 passes for 169 yards and a touchdown.

“I thought we did well as a team,” Ard said. “I made some bad throws and made some decent throws. It was fun to go out there. The game slowed down each possession… The defense slowed down. Watching film helped and we prepared more this week.”

Rockette spoke in the preseason about wanting to step up and become a leader on the offensive side of the ball. He had his chance and made the most of it Friday night. Rockette led all receivers with four catches for 79 yards and a touchdown.

“Rockette catches the ball well and he made some good moves,” Robertson said. “We know he’s capable of making big plays for us and we need those.”

The Commodore defense was stingy throughout the night and stayed active, sacking Horn Lake quarterback Kameron Coleman three times. Zeke Liggins recorded two of those sacks with Vincent Lewis having the other. The defense also had two takeaways, causing the Eagles to fumble on two occasions.

“We were just going out and doing what we’re supposed to do,” Liggins said. “This first game, we’re just getting started. If we keep going on and on we’re going to get better and better. We’re going to mature.”

The past two games, including the jamboree, Lafayette held two 6A teams to 16 points in six quarters.

Horn Lake was held scoreless by Lafayette’s varsity defense. The Eagles got on the board early in the fourth quarter when Coleman rushed in from 7 yards out against the Commodores’ junior varsity defense.

Lafayette now turns their attention towards an out-of-state opponent in the form of Clayton High School out of St. Louis, Missouri. The Commodores will host them Friday at 7 p.m.