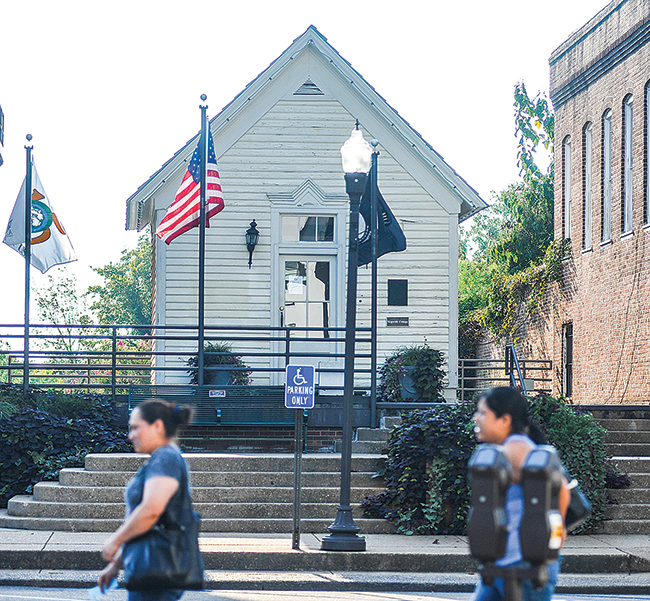 Plans call for moving the Skipwith Cottage, located on the Square in Oxford, Miss. on Monday, August 24, 2015, to a location across from the Lafayette County and Oxford Public Library.

The historic Skipwith Cottage soon will be uprooted and moved to its new resting place.

The cottage sits on a concrete slab that is the roof to the small city building. The roof has been leaking for some time and forced RSVP to relocate after mold started to build up.

“We’ve got to get that roof fixed and put that space back into our inventory,” said Mayor Pat Patterson on Friday.

City officials asked Jim Pryor with the Historic Properties Commission to look at areas in Oxford that would be suitable to place the building that was built in the late 1800s.

Pryor told the Oxford Board of Aldermen on Friday during a recessed meeting that the preferred site to move the house is across from the Oxford-Lafayette County Public Library, near the Skate Park.

“We’ve looked at three or four different sites,” he said.

Moving the house there, however, comes with a pretty hefty price tag. Pryor said some preliminary estimates to list and move the house are anywhere from $15,000 to $30,000.

The cottage once sat on the property of what came to be known as the Skipwith House, which was torn down in 1974. The home was owned by Peyton Horatio Skipwith, who used the cottage as his office.

He bought the home after the Civil War when he moved to Oxford from New Orleans. In New Orleans he had been a successful and wealthy cotton broker and merchant involved in the slave trade.

The cottage could be used for children’s programs from the library as well as for area where people could get tourism information about Oxford. “That’s a lot of money to move that,” Patterson said. “We’ve got to do something though.”

Since the building is listed as a Mississippi historical property it cannot be torn down.

“So we’re going to move forward with moving the little yellow building near the library and try to find a better way to do it,” Patterson said.