Be mindful of the new rules when tailgating in the Grove 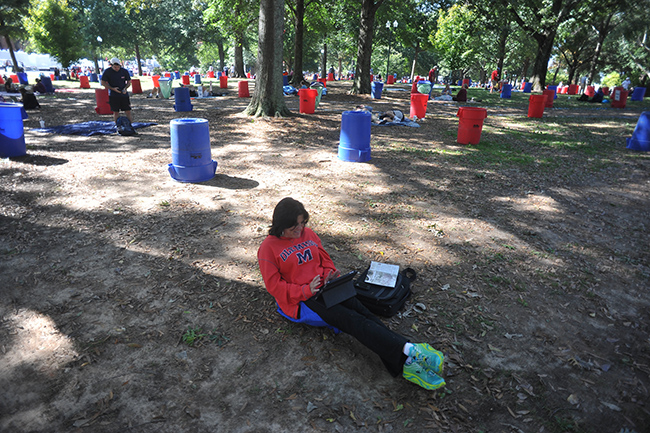 In just over a week, folks will be clamoring for that prized spot in the Grove to tailgate before Ole Miss’ first home football game at Vaught-Hemingway Stadium. But before pitching that tent and diving into some delicious tailgating food, fans of the Rebels need to learn what is acceptable and not acceptable from University of Mississippi officials.

“We want everyone to have the best experience they’ve ever had,” said UM’s assistant director for communications and marketing, Michael Thompson.

Rick Jenkins is one of those who has been coming to the Grove for years to enjoy the atmosphere of game day on the Ole Miss campus.

“I told someone last year in the Grove that the Grove takes me back a few years to autumn, football and the smell of bourbon and Chanel No. 5 in the air,” said Jenkins, a Water Valley native and season ticket-holder. “They’re always adding some kind of new rule, all because someone got stupid last year.”

One major rule change is officials will clear the Grove one hour before allowing folks to enter the Grove to prevent people from claiming a spot early on Friday evening.

Here is the list of rules in the Grove for the 2015 season: 1. Campus, the Grove and the Circle will open at 7:30 p.m. on Friday and close three hours after the end of the game or at midnight, whichever comes first. Please note, all tailgating areas will be completely cleared (including all people and personal items) at 6:30 p.m. on Friday until the 7:30 p.m. opening.

2. With the exception of approved university-sponsored tents, all spaces are first come, first serve.

3. Tents that are 12-by-20 or smaller are permitted. Tents that require stakes are not allowed. If a tent is determined to be an unacceptable size or is housing unacceptable activities, the owner or vendor will be asked to immediately reduce the size of the tent or the tent will be removed.

4. Know and obey regulations concerning alcohol use. Drinking is illegal for anyone under the age of 21. Individuals and tent groups that do not follow alcohol regulations are subject to removal and/or arrest.

5. Portable generators with a rating of 60 decibels or less are permitted for tailgate use.

6. No solicitation is permitted, including commercial or political advertisement or handouts.

9. Do not leave valuables unattended. The university is not responsible for unattended tents and items.

10. Help keep the Grove and the Circle beautiful by placing all recyclables in designated recycling receptacles and other trash in trash receptacles.

In addition to the above, other rules regarding tailgating at Ole Miss are below.

• No extension cords will be allowed to run across streets or sidewalks.

• Electrical circuits are not to be overloaded by plugging in multiple extension cords by using splitters or power strips. Circuits that are tripped will not be reset.

• Unauthorized tampering with the university’s electrical distribution equipment, including circuit breaker panels, junction boxes or disconnects will not be tolerated.

Marching band readies for the season