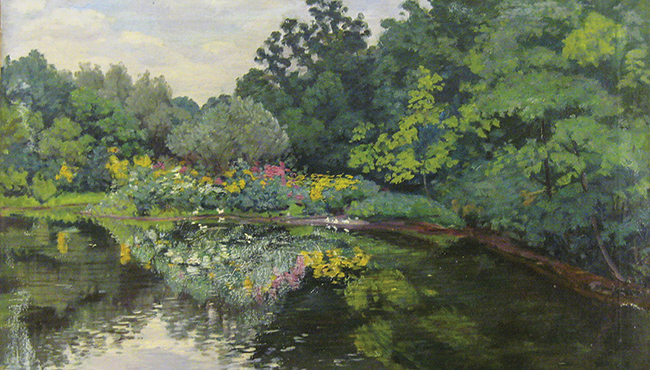 The University of Mississippi Museum features a new exhibit this fall showcasing the work of Kate Freeman Clark, one of the most talented 20th century Mississippi artists.

“Kate Freeman Clark: A New Look at a National Treasure,” a collection of pieces on loan from the Kate Freeman Clark Art Gallery, opened Aug. 11 and will be on display at the museum through Feb. 20, 2016.

Clark grew up in Holly Springs and enrolled at the Art Students League in New York in 1894 under the tutelage of painter and well-known art instructor William Merrit Chase. Thus began a formidable teacher-pupil relationship where Chase’s work in impressionism paved the way for Clark to become one of the best landscape and plein-air painters of her time.

For 20 years, she found inspiration in “En plein aire,” or French for “in the open air,” alternating between dark and light concepts. Chase was also a great influence on her work until his death in 1916. After a cataclysm of Chase’s death and the death of her grandmother in quick succession, Clark hung up her brushes and returned to Holly Springs.

“She was before her time,” said Rebecca Phillips, the museum’s coordinator for memberships, events and communications. “She was a woman that created in a man’s world. Clark never signed her paintings with ‘Kate,’ but as ‘Freeman Clark., F. Clark or not at all.’” Back home, Clark returned to a lifestyle of a proper Southern lady. Many of her friends were unaware of her major accomplishments as a painter, as she rarely talked about her time as an artist in New York. At her death in 1957, she gave instructions and funds in her will to construct an art museum in Holly Springs, including an inventory in a New York warehouse of more than 1,200 sketches and paintings.

“The exhibition helps the board of trustees fulfill its mission to enlarge Kate Freeman Clark’s recognition, regionally as well as locally, as a gifted artist and a treasure that will be available for the enjoyment of generations to come,” said Walter Webb, the gallery’s director.

Robert Saarnio, director of the UM Museum, said he is especially pleased to exhibit works of such a renowned artist who does not get nearly the exposure she should.

“The University Museum is exceptionally pleased to exhibit several remarkable paintings of Mississippi’s renowned visual artist Kate Freeman Clark,” Saarnio said. “Her paintings are rarely exhibited outside the Kate Freeman Clark Art Gallery in her hometown of Holly Springs, with whom we are proud to be partnering on this exciting show. We look forward to sharing these significant artworks, which will be displayed to dramatic effect in our museum’s handsome gallery space.”