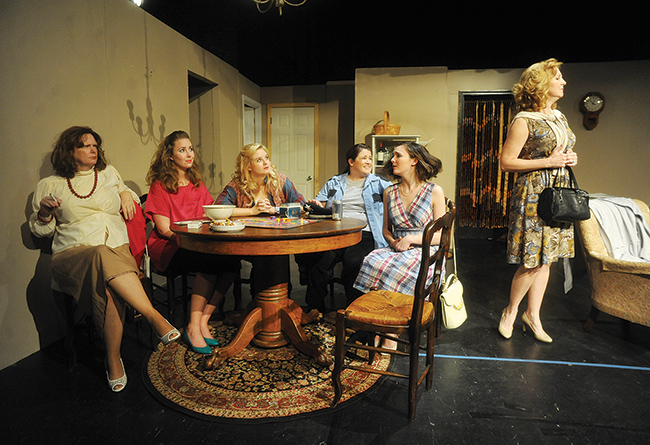 Kate Hooper (from l.), Melissa Thompson, Kat Watson, Shara Minton, Norma Barksdale and Susan Cox rehearse for Theatre Oxford's performance of The Odd Couple, in Oxford, Miss. on Tuesday, August 25, 2015. The play will be performed at the Powerhouse Community Arts Center with a dinner show beginning at 6:30 tonight, a 7:30 p.m. showing Thursday through Saturday, and a Sunday show beginning at 2 p.m.

Local theater director Debra Anderson brings her 20 years of directing plays to Theatre Oxford’s “The Odd Couple,” which opens tonight at The Powerhouse.

The play, written by Neil Simon, is the female version of the original “Odd Couple.” Updated by Simon 20 years after the success of his original play, the female-led play offers just as many laughs and a new take on the classic comedy of mismatched roommates.

Anderson was contacted by Theatre Oxford and asked to direct the witty and laugh-outloud exploration of the changing roles of women in the 1980s.

“This is my first time to direct a community production,” Anderson said. “All my experiences as a director have been through various school districts over the last 20 years.”

Cox said her biggest challenge was playing a character who has a personality completely different than her own.

“I am not an OCD clean freak and I never cook,” she said.

Cox has been on stage since she was 13 years old. This is her fourth play at Theatre Oxford. Almost 30 years ago, she played the role of Olive in college.

“I thought it would be fun to do the play as another character,” she said. “‘The Odd Couple’ has always been one of my favorite plays. I’m a huge Neil Simon fan.”

Watson challenged herself to make Olive a three-dimensional character.

“She is so rough and tough, sloppy and brash, but there is more to her than that,” Watson said of her character, Olive. “The script does not offer a lot of verbal indication to her softer side, but it is there. And I’ve tried to do the best I can at excavating moments for her vulnerability to peek out every now and then.”

Watson has performed in plays at Oxford High School and at Clemson University. After moving back to Oxford, she wanted to stay active in theatre and auditioned for “The Odd Couple.”

“My background in theatre is mainly dramatic — this is my first lead role in a comedy, and it is a very different approach to acting, which required some acclimation,” she said. “Even if she was a different speed, there are parts of me that align with Olive.”

The show opens at the Powerhouse Community Arts Center tonight and runs until Sunday. Evening performances Thursday through Saturday evening will be at 7:30 p.m. and the Sunday matinee is at 2 p.m.

Tonight’s performance is a “Dinner and Show,” featuring a pre-show Italian meal at 6:30 p.m. at the Powerhouse. Dinner include lasagna, baked ziti, salad, breadsticks, and tea. Wine and beer will be available for purchase at all performances.