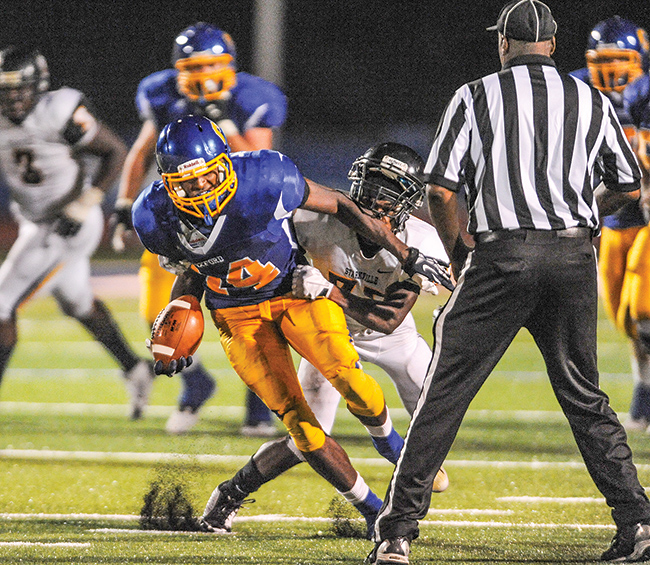 On paper, Oxford didn’t have much trouble taking down Southaven in its season opener last week. Mixed in throughout the 35-0 win were a whopping 24 penalties and a turnover the Chargers had to overcome before pulling away late.

Oxford may not be as fortunate if it can’t clean up its act this week.

The level of competition will go up a notch for the Chargers (1-0), who head to Starkville on Friday (8 p.m., ESPNU) for a Little Egg Bowl matchup that will enter the national spotlight as part of ESPN’s High School Kickoff with some of the state’s top talent on display. Starkville ran way from the Chargers in last year’s meeting, notching a 52-29 win in Oxford.

If the Chargers want a different result this time around, they know where to start.

The game will pit Oxford’s high-powered offense, led by senior quarterback and Tulane commit Jack Abraham and senior wideout D.K. Metcalf, an Ole Miss commit, against a stout front seven for the Yellowjackets (0-1) featuring a bevy of top-end talent. Louisiana Tech commit Lorenzo Dantler and tackle Kobe Jones, who’s weighing offers from Ole Miss and Mississippi State among others, are space-eaters on the defensive line while junior outside linebacker Willie Gay, whose early offer list includes Alabama, is already receiving buzz as of the nation’s top defensive underclassmen.

“Their defensive front is good,” Hill said. “They’ve got good speed and do a good job in the secondary. Their linebackers are really good, really quick and explosive. Offensively we’ve got our work cut out for us.”

Starkville’s offense will once again present a challenge for the Chargers’ defense, even if it has a bit of a different look.

Former Northwest Mississippi Community College coach Ricky Woods is in his first season as Starkville’s head coach, and Hill said his defense has studied film of last year’s game between the teams as well as the Yellowjackets’ opener against Noxubee County last week and even Starkville’s spring game “to try to compile things offensively that are different because of personnel and coaching styles.”

Starkville has a new quarterback in senior Montario Montgomery, but the Yellowjackets’ top weapon is back in senior wideout A.J. Brown, a consensus four-star recruit who’s weighing offers from nearly every Southeastern Conference school. The 6-1, 220-pound Brown caught 147 yards worth of passes last week and helped Starkville roll up more than 500 yards of offense against Oxford last season.

And it’s not just Brown that Oxford has to worry about on the outside, Hill said.

“(Brown) is a big, physical receiver that can go get it,” Hill said. “They’ve got a 15 (Milton Smith) and a 6 (Rontavis Clark) that are really good, too. They’ve got good speed. It’s more than stopping one receiver. You’ve got to stop several of them.”

Which is why Hill is stressing the importance of a cleaner game with his team. With high-end talent on both sides, a penalty here or a mistake there could be the difference in winning or losing.

“We’ve got to take our shots when we get them, and we’ve got to hang on to that football,” Hill said.