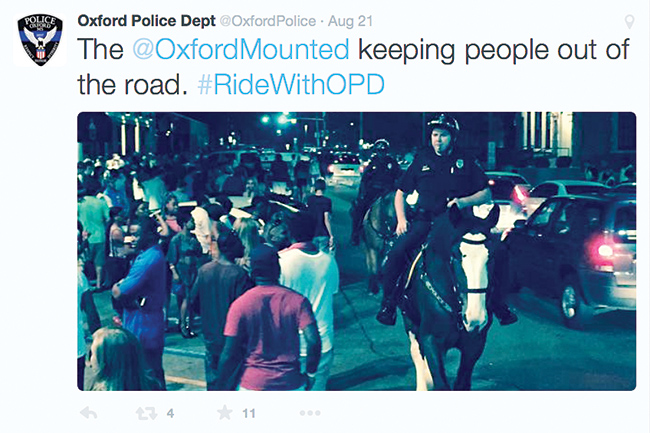 Curious about the rowdy weekend activity on the Square but you’re old enough to know better than to stay up so late or get mixed up in the party?

Oxford Police Department has a simple way for you to catch up on the action over coffee and breakfast in your pajamas on Sunday morning.

On Friday night OPD had its third Twitter ride-along where folks on the Square or residents on their couches could keep up with the department’s Twitter page and watch a policeman post where he was going and what the department was up to as the night progressed. Even those partying on the Square got in the action and posted photos and their own comments using a hashtag.

“We were discussing how to beef up public perception,” said Maj. Jeff McCutchen. “A few agencies are really using social media well, to the point they’ve hired their own people to do social media for the department.”

A story that really stuck with OPD leaders was when there was a shooting in Baltimore and the police department’s social media expert was right next to the chief every step of the way, tweeting.

“Once they cleared the building, someone who was inside said the only thing that helped us was seeing your tweets,” he said.

So the OPD decided to really focus on Facebook and Twitter and become more visible to the public and not hide what’s going on.

“Law enforcement gets beat up these days because of a lack of transparency,” McCutchen said. “Almost all of the feedback we have gotten has been positive. People get to see the calls we go on and what we deal with.”

On the ride along over the weekend, Patrol Lt. Hildon Sessums (who came up with the idea) was on foot on the Square and tweeted out the calls the department was getting and what happened along the way. He was on an overtime detail to tweet, and the normal amount of officers were working the Square.

“It gives you a real-time assessment of those things that you don’t really hear on the police scanner anymore or see in media reports,” McCutchen said.

Even those hanging out on the Square watched Twitter with their drinks and came down for photos with the police or tweeted what they saw going on, good or bad, and put it up with a hashtag to let the police know what they saw.

“What’s so good about it is it does so many things for us when you think about crimes and reporting crimes,” McCutchen said. “We have 7,000 Twitter followers. We heard from a young lady who said because she follows us and because of the responses we have on Twitter, she thanked us,” for being in the community and starting a conversation.

He said the department has received tips on social media to solve crimes also.

One of the best ways to reach residents these days in the case of an emergency is on social media, so the police department has partnered with End2End Public Safety, which has a Computer-Aided Dispatch system that pushes the calls that come in to the department out on social media. McCutchen said the department is using the CAD to immediately release information on crashes that are called into 911. It’s automated so an officer doesn’t have to pause to post.

The OPD took roughly 45,000 calls last year and is currently on pace to hit around 50,000. The volume of calls revs up during football weekends, which start next weekend.

McCutchen said OPD wants to do its fourth Twitter ride-along one Saturday in October during a big SEC football game, which will not only be entertaining, but it also will really give the public a good idea of the volume of calls the staff responds to. Currently the OPD is averaging 10 calls an hour from 8 p.m. to 2 a.m. on the weekends when the 30 establishments that sell alcohol are up and running on the Square.

Police Chief Joey East said the social media efforts are “a good thing and it’s going to be positive” for all involved.

McCutchen added a majority of the force is under age 30 and ideas on how to reach out to the community, especially through social media, are helpful in one major way also.

“It’s not just enforcement,” he said. “There’s a whole community side. We live here, want to raise our children here and have a vested interest in the community. Hopefully through social media people can see the compassion and humanity that isn’t perceived at all times.”