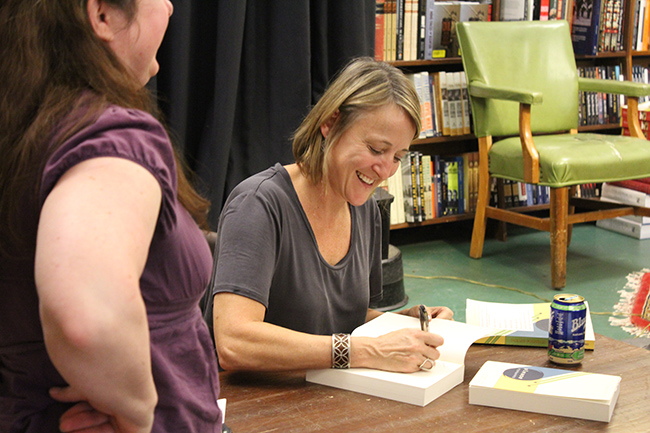 “Please Forward: How Blogging Reconnected New Orleans After Katrina,” is a collection of digital correspondences from those directly impacted in New Orleans by Hurricane Katrina, or as she refers to it — a “blogthology.”

Despite the reading revolving around such a somber topic, the atmosphere was upbeat and light-hearted while maintaining an intimate feel.

“My husband told me to only read the funny ones,” Joyce said.

That comment received the first of many laughs throughout her reading and question-and-answer session.

Joyce, an assistant journalism professor, started off with a brief introduction on why she felt compelled to collect and edit these stories.

“A lot of that stuff will erode… I wanted to lock in the memories,” Joyce said. “Even the bad ones.”

Rather than going a more traditional route of tracking down and interviewing survivors of the hurricane, she wanted to use these blog posts, comments and emails because for her, “that’s where the story lived.”

Given the nature of the Internet at the time, the toughest task was finding the people who wrote the posts and comments years ago to get their permission to be included in he book.

“I was getting really close to my deadline and it was making me nervous,” Joyce said. “Like, can I find these people?”

Her reading consisted of two excerpt — one from Dr. Scott Delacroix, a urologist, and one from Joshua Cousin, who was at the time a New Orleans teen.

The doctor’s story detailed the jarring experience of underestimating just how devastating the storm would be and working on patients while armed and wearing a bullet- proof vest.

The second excerpt detailed Cousin’s experience after the hurricane, having to leave behind their dog as they boarded the evacuation bus and how he was lucky for having only lost one family member so far.

She opened the floor to questions once she finished Cousin’s post.

A member of the crowd makes the point how traditional blogging has all but died off and how she feels about it seeing how important it was to the community reaction of the disaster.

“There’s a definitely a shift now,” Joyce said. “I know even when I write longer emails people don’t tend to reply, but there’s tons of ways to write long form now…I don’t think there’s a fall of the blog world.

A self-described historian asked her why, given how story-driven the tragedy and artifacts she collected were, she did not feel the need to include a narrative throughout the book.

“I don’t think I would’ve been capable of it,” she said.

Those who wrote the posts were overall receptive to the book. Many enjoyed seeing “how elegantly they wrote while their hair was on fire,” she said. For most, the pain was more in rehashing the emotions of that time rather than the memories themselves.

“Everyone in New Orleans is sick of the word resilient,” Joyce said. “But it’s accurate.”