WVHS aims to use Railroad Rivalry to get on track 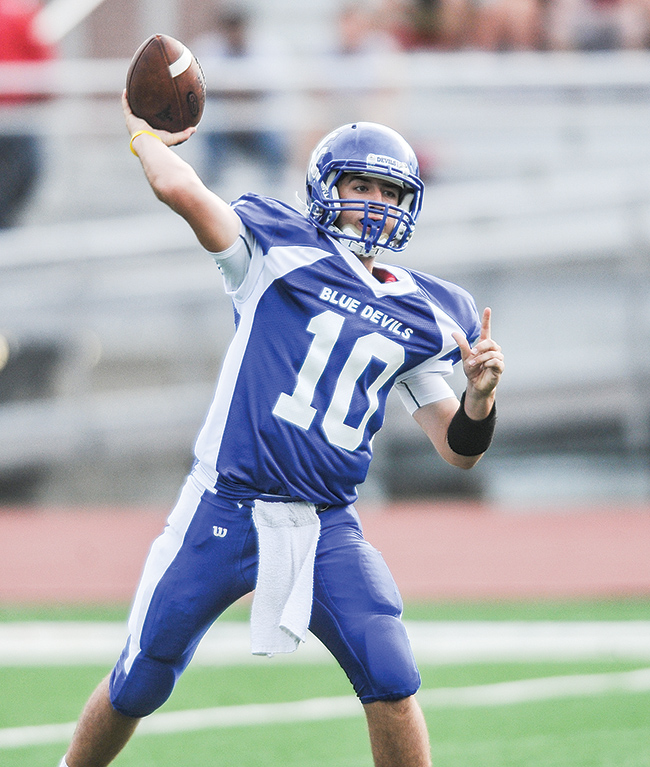 Water Valley vs. Nettleton in a preseason jamboree at Bobby Holcomb Field in Oxford, Miss. on Saturday, August 15, 2105.

When Water Valley and Coffeeville meet on the gridiron, there are bragging rights on the line as it is the annual Railroad Rivalry game. This year, there is the added stake of each team trying to win its first game of the season.

The Blue Devils (0-1) fell to Eupora, 14-7, in their season opener last Friday while the Pirates (0-1) were routed at home by Calhoun City, 48-9. The teams will meet at Bobby Clark Field Friday night, aiming to knock their zero out of the win column. The game can be heard on 105.5 FM.

This is not a game that the Water Valley coaches had to use extra motivation to get their players up for after a close loss last week. The Coffeeville rivalry is known throughout the Water Valley football program.

“All these kids know because we play (Coffeeville) from the seventh grade up,” Water Valley coach Brad Embry said. “All the kids know, and they’ll be ready to play.”

In the loss to Eupora, Water Valley suffered key injuries to quarterback and safety Kirkland Horton as well as wide receiver Quez Towns. Horton had a hamstring injury, and it will be a game-time decision if the senior will see any playing time.

For this week, that makes the decision at quarterback very simple — sophomore Ty Varner will get his first start at the helm of the Blue Devil offense.

Varner struggled in the season opener last week, throwing three interceptions, including a 99-yard pick-six that ended up being the winning score for Eupora.

In last year’s matchup, the Pirates got the better of Water Valley, beating the Blue Devils, 20-14, at Coffeeville. The Pirates relied heavily on their running game, rushing more than 50 times for 427 yards. Coffeeville is led by first-year coach Kris Thigpen, who replaces Johnny Jackson, and has given the Pirate offense a bit of a makeover.

“I think they look to have a different philosophy (on offense),” Embry said. “They’re going to spread you out and run the ball. Spread run game. A lot different than what coach Jackson did offensively.”

Senior Kendarius Cauthern once again leads the Pirate offense. In Johnson’s run-first style offense, Cauthern was a double threat. He passed for 254 yards but was deadly on the ground, rushing for more than 946 yards on 112 carries in the 2014 campaign.

“He’s kind of what stirs the drink,” Embry said of Cauthern. “He’s a good player, he’s impressive. They’ve got a good scheme, so it’ll be a challenge for us for sure. It’s a rivalry game.”

The Water Valley offense had a lot to digest during practice this week in preparation for the Coffeeville defense. While the Pirates gave up nearly 50 points last week, Embry still views them as a challenge for Varner or Horton if he is able to play.

“(Coffeeville) is going to be athletic on defense,” Embry said. “They’re sound fundamentally. I watched them on film, and they line up well and have a lot of different formations. They’ve been well coached, and their athleticism is well-known.”