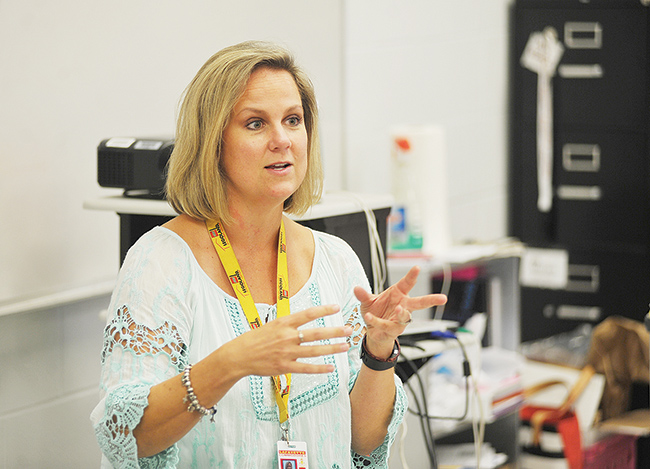 Rob and Lucy Bartlett lived on the treelined road in 2005, just a half-mile from the beach. As Hurricane Katrina moved closer to the coast, the Bartletts, who now live in Oxford, made the choice to remain at home and help some elderly folks who lived down the road. Their own children couldn’t be there. Their son was a police officer and needed to be on the job as the area braced for the coming storm.

After the storm hit, the water along Pascagoula rose 21 feet above sea level. Those, like the Bartletts, who had a second story, found refuge on their upper floor to wait out the storm. Wearing life preservers, Rob swam over to his elderly neighbors’ home.

“We just floated around the house for a while,” Rob said.

Much of the damage and many injuries from Katrina came from debris crashing into homes as the water rose.

“Our trees caught a lot of the debris, thankfully,” Rob said. “It would just get hung up on those trees.”

On the other side of the Mississippi boot heel in Bay St. Louis, Nathan Yow and his father prepared for the oncoming storm in their usual manner. Being raised on the coast, they were no strangers to hurricanes. They gassed up their cars, stocked up on nonperishable goods and ice cream.

“I think we stocked up on ice cream because nothing ever happened during storms before, other than rain or minor limbs falling from trees,” Yow said.

The Yows also lived in a two-story home. Yow and his father waited out the storm in an upstairs bedroom. His mother, a nurse, was at work at Touro Infirmary in New Orleans.

“Dad and I would ask each other what we thought we should do and each time we would say ‘keep praying,’” Yow said. “We spent probably three hours in constant prayer. The water rapidly filled the house with water, but right before it came to my parents’ bedroom, where we were, the water stopped rising.”

The storm raged on. The water started to rescind, but the winds continued to batter homes.

“There was an incredible peace at all times during the storm because we knew God was watching over us.”

“Governor (Haley) Barbour was on TV, saying how Mississippians were going to stand together and not loot,” Atkinson said. “That was comforting.”

The storm hit and Atkinson, several months pregnant with her first child, decided to lie down to try to sleep.

“I could feel the house move with the wind,” she said. “That’s when I started to get pretty scared.”

The storm had weakened some but was still about a Category 3 when it hit Holmes County. Atkinson’s 100-plus-yearold house suffered some roof damage and fallen trees. The power was out and would remain out for about a week to 10 days.

“It was so hot,” Bartlett said. “The heat and humidity was just unbearable.”

The Bartletts started to go through their home, taking everything they owned out onto the lawn.

“You made two piles,” Rob said. “One for stuff you couldn’t save. And one for things you thought you could save. Each day, the pile of garbage got bigger as you realized you couldn’t save those other things.”

The Bartletts joined their neighbors on the days following Katrina. They had all heard reports of the devastation across the gulf and while they all lost just about everything they owned in the floods, they didn’t lose each other.

“We got together and everyone cooked what they had in the freezer on the grills,” Lucy said.

Soon, help started to arrive, bringing food and other supplies to the neighborhood.

“The churches were amazing,” Lucy said. “Baptists, Methodists, Presbyterians — they all came. It helped so much.”

The Bartletts wound up being one of the luckier families. They had insurance on their home and received a FEMA grant.

“We were giving away money because everyone was not so lucky,” Rob said. “I know some don’t agree, but to us, the federal government was wonderful and the state officials were wonderful. The Red Cross people were here helping too.”

The Yows and their neighbors started to emerge from their homes as well after the storm and the first priority was to begin checking on neighbors and going door-to-door.

“Dad and I pulled our bikes out of the garage and rode them around town checking on people and taking pictures,” Yow said. “We were fortunate to not lose any friends or family. In the following days while national media was focusing on the events in New Orleans that were caused by corruption rather than the storm, people in Bay St. Louis that experienced a direct hit from Hurricane Katrina came together to help each other.”

The Bartletts and the Yows lost just about everything. The Bartletts’ home suffered major damage. The entire bottom floor had to be gutted to the studs. They lived on their second floor for several months. Their cars were also lost.

“I lost everything but what I was wearing when the storm hit, but none of that mattered,” Yow said. “Losing everything helped me put my priorities back in place.”

Back in Holmes County, concerned for her unborn child’s safety with the heat and no air conditioning, Atkinson decided to make the drive to Oxford to stay with her grandmother.

Seven years after the storm, Atkinson and her family moved to Oxford. She teaches journalism at Lafayette High School where she’s been for three years.

Yow was attending law school in Loyola when Katrina hit.

“Schools throughout the country opened their doors to Loyola students, so I came back to Ole Miss,” he said. “My brother was a third-year student at Ole Miss so I moved into his apartment and began classes about a week after the storm.”

His father died a year after the storm as a result of an accident that happened at his home after the storm. Yow decided to remain in Oxford after graduation where he started his gun business, Mississippi Auto Arms, while he was in law school at Ole Miss.

“The business was based online and could operate anywhere, but I liked Oxford and my fiancee liked Oxford, so when we both graduated in 2007, she moved to Oxford,” he said.

The Bartletts rebuilt their home in Pascagoula, which took seven years to sell. After the storm, insurance rates and property taxes skyrocketed making it hard to sell a home along the coast. Finally, it sold and they moved to Oxford where all three of their children had attended school.

“We always knew we would retire in Oxford,” Rob said. “It was just earlier than we expected.”

Looking back at Katrina from Oxford