Looking back at Katrina from Oxford 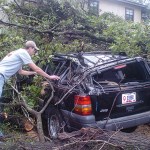 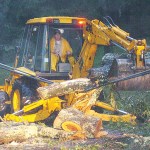 By the time Hurricane Katrina made its way up to Oxford, 12 hours after devastating the Gulf Coast, it had weakened a good deal. However, she had just enough steam left to wreak some havoc in Lafayette County.

Winds were between 70 and 75 miles per hour when it hit Oxford and Lafayette County, according to Emergency Management Coordinator Jimmy Allgood.

“It was still pretty much a Category 1 hurricane,” he said.

Reports of wind damage started coming in at about 8 p.m. on Aug. 30. The winds ripped off roofs, broke windows and knocked down trees and power lines in many areas around the county.

When the winds settled and the storm had passed, a total of 110 homes would suffer some type of damage due to the storm.

“A total of 66 homes received light to moderate damage and 44 homes had heavy to major damage,” Allgood said.

Most people had power returned to their homes within 24 hours. Some homes went up to two days in more rural areas of the county.

No shelters were opened in the area.

“We didn’t have any requests for shelters,” Allgood said.

Allgood said evacuees from the coast started arriving in Oxford about three days before the storm.

“Those who heeded the warnings and had some connection to Oxford, started coming in,” he said. “Most stayed with family or friends or local hotels.”

Once power was back up and roads cleared from debris, area first responders and electric crews from Oxford Electric Department and North East Mississippi Power Association started to head to the coast to help where they could.

“Our Heavy Rescue Team, which specializes in structural collapse rescue, headed down to help find people trapped in homes,” said Allgood, who went down with the team. “We went down on Wednesday and started running missions on Thursday and stayed about four or five days.”

Allgood’s team didn’t go on any rescue assignments, but instead helped clear the streets, performed searches and assisted in body recovery.

Crews from area fire, police and electric departments continued to send help to the coast for several weeks following the storm.

“When we had our EF3 tornado in 2008, some of the first people offering to help come here to help us were from those areas,” Allgood said. “They remembered we were there and wanted to return the favor.”

Hurricane Katrina helped shape and change the way many cities in Mississippi, including Oxford, handle natural disasters. Cities have re-examined their own emergency management policies.

“Katrina was well above what you can ever plan for,” Allgood said. “It affected the entire coastline and most of the southern states. In Mississippi, 81 of 82 counties were declared a disaster area.”

However, the storm did leave behind many lessons learned.

“It taught us a lot about having better communication abilities across the state,” Allgood said. “It showed us the importance of hardening critical infrastructure so you can still communicate with each other and the general public, and having the resources on hand to deal with an event of his kind. It made us look back on our emergency plan and see what we could make better.”

Oxford now has a fully functional, storm-resistant emergency management operations center behind Fire Station No. 1 on McClarty Drive. It was built to withstand winds up to 200 mph. It has beds, a kitchen and a communication center so if Oxford finds itself dealing with any type of disaster, city leaders and first responders can continue to communicate and work through the disaster.

Katrina taught all Mississippi residents the importance of staying prepared and having three to five days of supplies — food, medications and water — available at home, as it often takes that long for help to arrive in affected areas.

“Most important, it made us realize, that even living in North Mississippi, we are not immune to hurricanes,” Allgood said. “It helped me, as an emergency management coordinator, being down there after it happened, to see what could happen. To see the obstacles the others were dealing with. It brought a lot of insight in what we needed to be doing up here.”