Subcontractors try to keep up with city, county housing boom 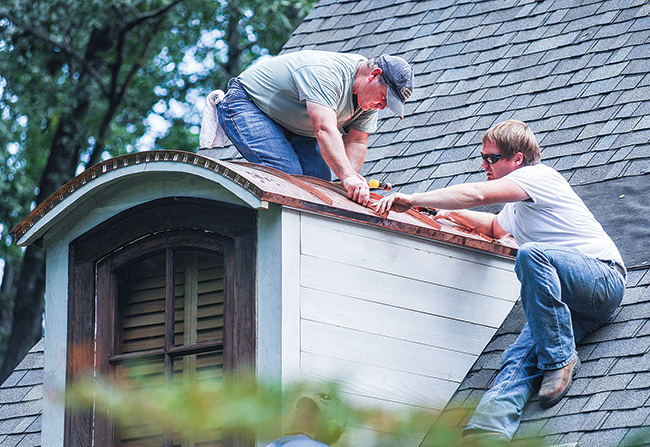 It’s a boom that few cities have seen with the economic downturn of recent years.

When it will end is anyone’s guess, but if the prognosticators are correct, Lafayette County could double in population bythe year 2040.

A review last week of the Vision 2037 plan spearheaded by the Orion Group, a planning group of experts who are outlining the future of Oxford, revealed Lafayette County is projected to have a population of 70,000 near the middle of this century. Oxford’s population by that time is expected to be 45,000. That does not seem far-fetched since more than a hundred people a month relocate and start calling Lafayette County home. The problem is where to put all these people and the struggle to keep up with the demand for housing.

Subcontractors are swamped with work and are unable to meet the current housing market demands.

However, they’re also making more money than they ever have in the construction business.

Clay Reeves, co-owner of Valley Sheet Metal Works, has been in the heating and air conditioning business since 1987 and has owned his own companys for the last 17 years. He has seen few building booms like the one currently taking place in Lafayette County.

“This has not been nearly the hottest summer we’ve ever had, but it has been the busiest,” Reeves said on the phone while driving to one his current 20 job sites. “I’ve turned away more work this summer, more than I ever have and I hate doing that. I’ve turned away easily $100,000 worth of jobs.”

The reason the subcontractor has turned down so many jobs is due to the shortage of qualified labor. He currently has nine employees and would hire more if they were qualified.

“If we could find more qualified people, we’d hire them on the spot,” Reeves said. “There’s just a limited number of people who are qualified to do these type of jobs. Skilled labor is becoming very scarce.”

Reeves said the demand for housing is so strong right now that his crews have had to set up temporary heating and air conditioning units “just so we can get folks in there.” He said permanent units will be installed in the fall. He’s also had to postpone some work.

Kennedy Powell is a “one-man show” constructing cabinets for homes, but he said that has not slowed down the demand for his custom-made cabinets.

“I’m working 12 hours a day, six days a week. And I’d work on Sunday if my wife would let me,” joked Powell, owner of K&M Custom Wood Working in Abbeville.

Powell, who has built cabinets for the last eight years, has a helper to help him keep up with demand — but it isn’t nearly enough.

“We’ve got four orders going on at this time and five more in the lineup,” Powell said. “We’ve been doing a set a week. I’ve got 24 cabinets in the shop right now we need to paint.”

“We’re turning away jobs,” Powell said. “I wasn’t planning to get this big.”

He doesn’t plan to add to his workforce, however.

“I think I’ll just keep up with what I got,” Powell said.

While the demand is high for housing, the ability to get into a home is also very reasonable in Lafayette County.

Counties were ranked based upon the ratio of mortgage applications to mortgages approved in the county. Lafayette County is ranked No. 115 among all other counties in the country.

In the meantime, Reeves and the rest of the subcontractors will just keep on plugging away, trying to keep up with the demand.

“I’ve seen some good building booms and this one compares to just before the housing bubble burst,” Reeves said. “We’re just trying to stay ahead.”