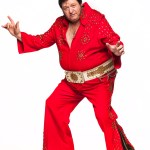 Will Atkinson, an Elvis impersonator, in Oxford, Miss. on Wednesday, November 9, 2011. 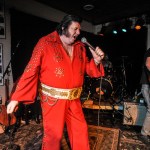 Will Atkinson looked and sounded like Elvis. He even moved like him on stage while singing the songs The King made popular more than 60 years ago.

But that isn’t what made people love him and it’s not what people will miss about him most.

Oxford’s “Big Hunk O’ Love,” was simply that — a person who knew how to love everyone and anyone he came across.

Atkinson, 51, died this morning at Baptist Memorial Hospital-North Mississippi where he had been in ICU after complications from pancreatitis that caused his kidneys, and eventually his heart, to stop working.

When he wasn’t performing as Elvis, he worked at the Oxford Walmart. Customers always knew he was working because Elvis or gospel songs could be heard throughout the aisles, but they weren’t coming from the sound system.

“The first time I ever encountered this Elvis lover, I was walking down the aisle at Walmart singing ‘Suspicious Minds’ by Elvis,” said Ariel Ladner. “I was also lost, looking for some baking soda. Mr. Will stopped and said, ‘Can I help you little darling?’ and I graciously said yes and he said, ‘Anyone who can sing Elvis like you just did can have my help at anytime.’ He took me right to the aisle I needed.”

The second time Ladner ran into Atkinson was at the Library. He was singing “Glory, Glory Hallelujah.”

“With the most enthusiastic smile on his face he remembered me and said, ‘It’s so good to see you little lady.’ He was such a sweet and happy man. He had a way about him that could bring a smile to anyone’s face.”

Terry Vaughn was having a bad day while working at Walmart and Atkinson popped over to her and asked her if she knew what she looked like.

“He began to softly sing, ‘Crying in the Chapel.’ I laughed so hard and started to look forward to him coming by to sing about my ‘look,’” Vaughn said.

Atkinson started working as an Elvis tribute artist in the late 1990s. Leading gospel music at his church in Courtland, he received a call from his preacher asking Atkinson if he would do Elvis for a ’50s night at the church. Atkinson agreed and after the church show, began performing more regularly as Elvis.

“You get all these impersonators — tribute artists — trying to do Elvis to a T. … But what I try to do is, I combined both our styles. Like, “What would I do, Will Atkinson, if he was Elvis Presley, for how to get the audience more into it?’ And it comes out good, actually,’” Atkinson told the EAGLE in 2007.

Atkinson performed solo or with his band, “The Mississippi Boys.” He would perform Elvis, dressed in Elvis-styled jumpsuits, and often performed other songs as well. But it was his giving nature that people will remember most about him.

“I first met Will Atkinson over 25 years ago when I was the coordinator for the Muscular Dystrophy Association telethon in Oxford,” said Gene Hayes. “Will came to me asking to be a part of the dance fundraiser we had at the old National Guard Armory. Three years in a row he was there, singing his Elvis songs to a handful of people that first year and over 100 the next two years. Will always put himself above others and he was quick to share his talent with anyone in need. Will was a giant of a man with a giant heart. Every time I saw him all these past years he was always smiling, asking how I was doing and ending with “God bless you.”

Some of Atkinson’s shows were more personal and private, like for Deborah Aston’s mother, who died in January but not before she was serenaded by Atkinson for two and a half hours in September on her birthday.

“She was at the nursing home and it was supposed to be a 45-minute show, but it turned into a two and a half hour show,” Aston said. “He brought her flowers and a scarf and sang all her favorite Elvis songs. I know she’s got a big hug for him and is talking up a storm because she couldn’t do the talking on Earth.”

Before working at Walmart, “Big E” was a manager at the Pizza Hut on University Avenue. That’s where James McCullar met him.

“He interviewed me there for a server position,” he said. “He brought that place to life. Many nights it would be just us closing with the jukebox blaring some Elvis tunes and Big E bellowing those lyrics like he had wrote them himself. Though my heart weighs heavy at his loss, I am blessed. I will cherish those long nights at closing. Forever, he will be The King.”

Bobby Jones had known Atkinson for most of his life.

Jones said he often thought his friend was too sweet, too innocent for this world.

“The talent he had was so God-given,” Jones said. “He is where he deserves to be now. He was a wonderful representative of the perfect, pure, unconditional love of Christ. You could not be in Will’s presence and not feel happier from having been with him.”

On Friday, Atkinson wasn’t feeling well but he still went to the Holiday Lodge on the north side of the lake in Como. He sang for two solid hours.

“I saw it to be Will’s best performance ever,” said friend Max Lomax. “To me, Will might have known that would be his last show — through his personal pain, he delivered a stellar show. The buzz in the restaurant was vivid with smiles, laughter and comments about how great Big E was. Everyone who was present had a remarkable time, including several first-timers. Will, the showman he was, had all the ladies standing in the aisles dancing the night away. I will miss Big E, as he brought smiles and laughter to everyone who crossed his path.”

A Go Fund Me has been established to help offset funeral costs at www.gofundme. com/helpwillelvis.