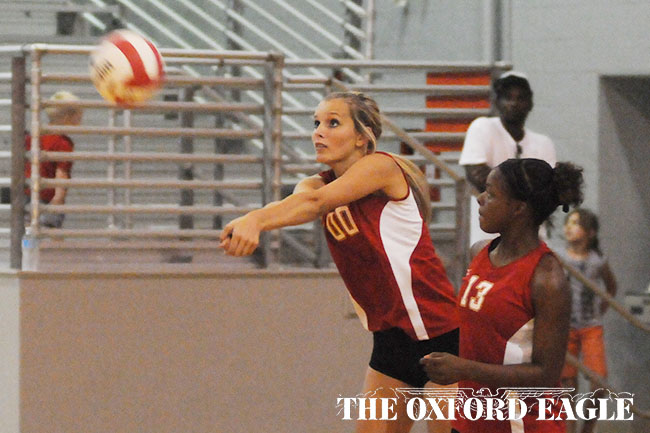 The last time Lafayette and Caledonia met on the volleyball court, a berth to the next round of last year’s state playoffs hung in the balance.

The stakes were not as high Thursday night, but after realignment, the Commodores and Confederates found themselves as Region 4-4A/5A opponents.

Lafayette (5-8, 1-1 Region 4-4A/5A) and Caledonia each returned five starters from last year and were evenly matched throughout the night. When the Commodores had their chance to make a dent in the Confederates’ lead or steal momentum, they were unable to capitalize.

“I figured it’d be a battle and it was,” Lafayette coach Clint Jordan said. “We didn’t score any of the points that we needed to score. We’d make a run then commit an error. We kept getting momentum then hurting ourselves.”

Each set featured a yo-yo theme with Caledonia stretching out to a lead of a handful of points, then Lafayette would rally to get to within a couple points. The Confederates had an answer every time, including the opening set when they pulled away for a six-point win.

“Caledonia is very consistent,” Jordan said. “So we followed a rhythm with them, and that’s not good. You don’t want to follow their rhythm, and we did that and that’s because they are a good team.”

When the two teams met last fall in the playoffs, the match went the distance with the Commodores pulling out a 3-2 win, eliminating Caledonia at its gym. The Commodores had chances to extend the match Thursday night.

Late in the second set, Lafayette trailed 17-20 and won three of the next four points to make it a 21-20 Caledonia lead. The Commodores could not find what Jordan called a “critical point” to tie up the set, and the Confederates won four of the next seven points to grab a 2-0 lead in the match.

There would be another chance for Lafayette in the third set when it trailed 15-20. The Commodores got to 20-23, but the two teams traded points until the Confederates clinched the match.

“(Caledonia) was able to win every single critical point,” Jordan said. “We didn’t win one critical point. Since I’ve been coaching here, that’s only happened twice, and both times we were just overmatched.”

Having five returning starters on his team, Jordan felt the Commodores would be a little further along at this stage of the season but has not hit the panic button just yet. With more than a month left in the season, he is still working on the little things with his squad before advancing to a more specific game plan.

Lafayette hits the road next week starting Tuesday when the Commodores travel to Ripley followed by a trip to Corinth on Thursday.