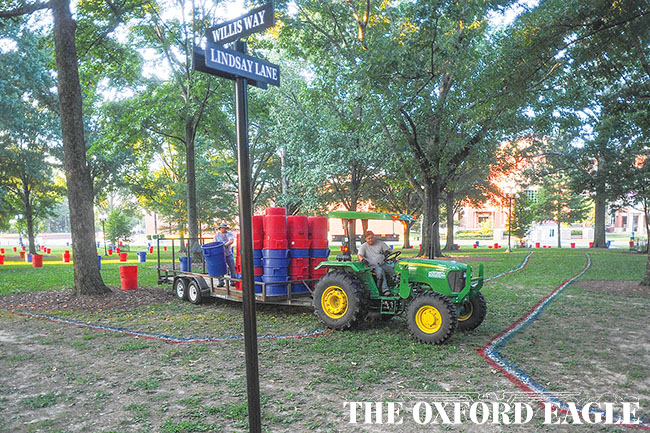 A crew prepares for for Ole Miss season opening game against UT-Martin, in the Grove in Oxford, Miss. on Friday, September 4, 2015. Game time is 11 a.m. Saturday.

With a new intersection at West Jackson Avenue and Highway 6, local officials are gearing up for this weekend’s first home football game and asking visitors — and residents — to remain patient with traffic at the intersection and around town.

With thousands of visitors in town, people are being encouraged to use the shuttles and buses around town to get to campus to watch the game that starts at 11 a.m.

Oxford-University Transit will have two buses running every 15 minutes starting at 6 a.m. Saturday. The buses will pick up from the Jackson Avenue Center near the Old Oxford Mall and stop about two hours after the game.

The OUT shuttles are free of charge, however, transit officials ask everyone to visit the OUT website, www.oxfordms.net/visitors/gameday-shuttle-service. html, to read the rules of what items are allowed or not allowed to be carried onto the buses, including tents, pets and large coolers over 40 quarts.

Visitors who have a permit to park on campus will be permitted to enter campus from any entrance except those on Gertrude-Ford Boulevard. Permit holders must park only in the lot type that matches their permit designation.

The Double Decker bus will also be running people to the Grove from the Square at no charge.

Oxford Police Major Jeff McCutchen said he doesn’t expect larger-than-average football game crowds in town for the starting game since it kicks off at 11 a.m. and it’s not a SEC game.

“These games are good to get the kinks out,” McCutchen said this morning.

The biggest area of concern, he said, is the new intersection at Highway 6 and West Jackson Avenue.

“We are encouraging people from out of town to watch the video we made of the intersection on our Facebook page,” he said. “And we’re asking everyone to be patient with all drivers as many of the out-of-town guests have not driven on the intersection yet.

“We will have an MDOT (Mississippi Department of Transportation) engineer here with us helping to work the lights,” McCutchen said.

OPD suggests drivers use Anderson Road to get to the highway to avoid the West Jackson traffic. Those on West Jackson will not be allowed to make a left-hand turn unless it is at a traffic light. “We’re not going to let traffic cross over each other,” he said.

Long-term parking is discouraged from the downtown Square. Meters will be programmed to only allow someone to pay for three hours at a time.

A three-hour parking limit will be in place on Saturday. Meters will only allow someone to pay for up to three hours at a time. If someone wants to park longer, they cannot pay any more money until the meter runs out after three hours.

Mayor Pat Patterson said during Tuesday’s Board of Aldermen meeting that he encourages people to use the city and university shuttles and welcomes the start of Ole Miss Rebel football.

“We’re ready to go,” he said, “but there’s going to be a lot of traffic, as we all know. It might be a little slow getting out, but just be patient and take it one step at a time.”

‘RIOT: Witness to Anger and Change’ is a history…