How to navigate W. Jackson and Hwy 6 area 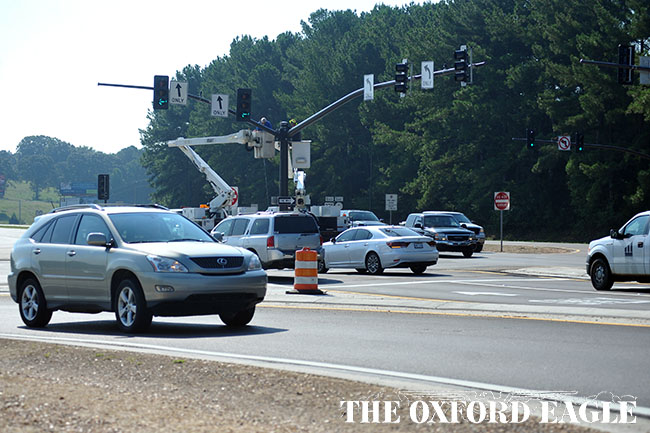 A Mississippi Department of Transportation crew works at the Highway 6 and West Jackson interchange in Oxford, Miss. on Thursday, September 3, 2015. The Oxford Police Department has released a video on how to drive through the interchange.

Do you have guests coming into town this weekend who you know will be confused at the Highway 6 and West Jackson Avenue interchange?

Patrol Lt. Hildon Sessums, who has been with the department for 10 years and is actively involved in its social media efforts, spent a couple days working on the video in hopes of preventing accidents and helping visitors get a head’s up on navigation.

“We wanted to show people the new intersection because a lot of people just come in for ball games,” Sessums said.

It took Sessums about 45 minutes to film the two-minute video and then two days of on and off splicing, cutting and putting it completely together.

“It has already been viewed on Facebook more than 1,400 times and shared 101 times,” Sessums said Thursday afternoon, less than 24 hours after putting the post up. “Some of the comments are people saying they appreciate the video.”

He said reaching out on social media is the way to reach a huge chunk of the population these days.

Sessums said he would like feedback on the video from residents and visitors alike for his future social media efforts, which also will possibly include an instructional video on how to navigate another dangerous traffic spot in town: the lane divider by Walmart on Jackson Avenue.

“A lot of departments who are active on social media have a higher favorability rating in the community,” he said. “Some departments across the country are doing this and have a huge following. People feel like they’re in the loop.”

Sessums said to reach out on Facebook, email and Twitter with suggestions at any time because the department is “constantly brainstorming new ideas and is always open to suggestions.”