COLUMN: Football’s getting back to normal for Treadwell 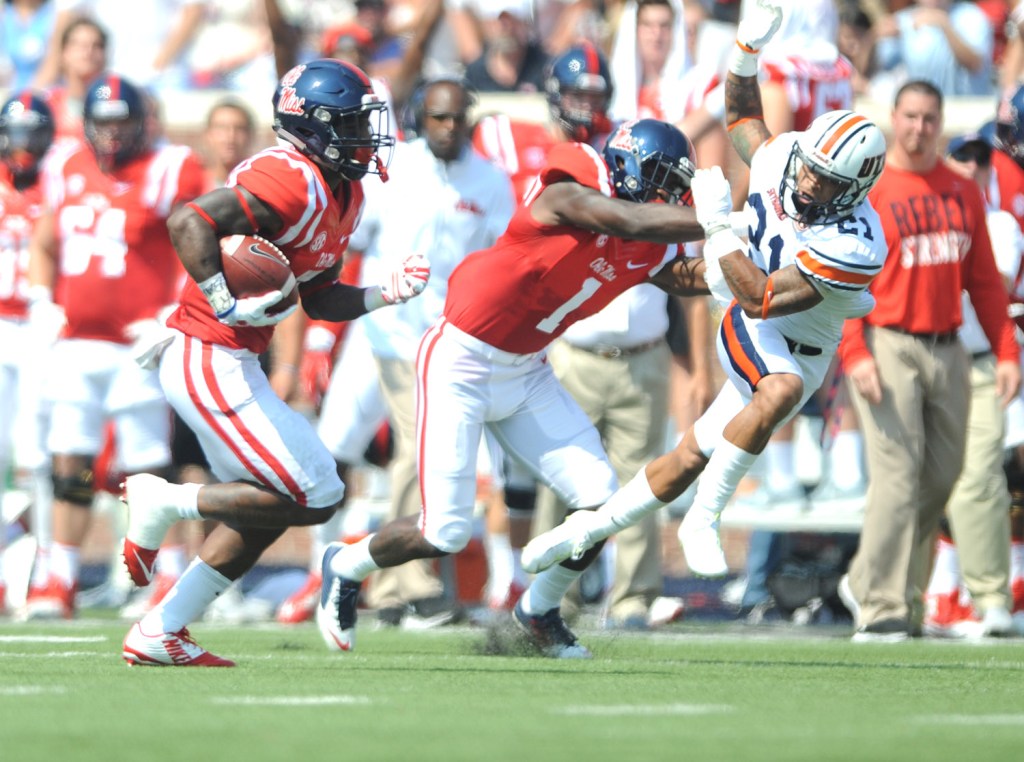 Ole Miss running back Jaylen Walton runs 60 yards for a touchdown as Ole Miss wide receiver Laquon Treadwell (1) blocks Tennessee-Martin defensive back Jordan Landry on Saturday. Treadwell helped clear the way for a number of big gainers in addition to catching four passes for 44 yards in his first game back from injury. (Bruce Newman)

It was a quiet day for Laquon Treadwell, but the stats were irrelevant.

The last memory anyone who follows college football has of Ole Miss’ star wideout playing a game inside Vaught-Hemingway Stadium is the play — a frightening tackle at the goal line against Auburn that left Treadwell in intense pain and tears as he was carted off the field with what everybody soon found out was a broken leg and a dislocated ankle.

Any coach or teammate who talked about Treadwell in the offseason said he was even better than he was as an All-American when he was healthy. He’s lighter, they said. Playing closer to 210 pounds than the 230 he’s normally carried around has made him faster out of his breaks and more explosive, they said.

But there was one lingering caveat: He hadn’t been hit at full speed.

Rarely did Hugh Freeze allow his offensive players to get tackled all the way to the ground during fall camp, but the Rebels were extra careful with their receiver who had worked too hard to get back to his old self.

That hit came midway through the first quarter after a potential touchdown catch went off his fingertips just seconds earlier. The best outcome was that Treadwell didn’t even recognize contact had been made.

“You usually never feel the hits unless it’s a big one,” Treadwell said, “but I didn’t feel it. It was all good.”

Treadwell only made three more catches the rest of the day totaling 44 yards — the one-sided score had something to do with his chances with Freeze admitting he’s been “overprotective” as he’s got one of his biggest playmakers healthy and tries to keep him that way — but the wideout showed flashes that he’s getting back to form.

Ole Miss followed the first catch by immediately going back to Treadwell, who stiff-armed numerous Skyhawks and left some of them behind him before eventually being pushed out of bounds. When Chad Kelly took off for the end zone from 20 yards out late in third quarter, he went in untouched with an assist from Treadwell, who drove some poor Skyhawk deep into the end zone to clear the path.

Treadwell wasn’t in midseason form, and he wasn’t expected to be. He’ll have to see a lot more live defenses and take some more hits to completely get back to looking like the first-round draft pick he’s projected to be in May.

But it’s a start for a playmaker Ole Miss will need when it actually faces teams its own size. Many may have forgotten by now, but Treadwell still led the Rebels in receptions last season without playing the final four games and finished third among the group in yards and touchdown catches.

There was rust. Kelly’s only interception went off Treadwell’s hands and into those of Jordan Landry. There was also some understandable apprehension as Treadwell admitted he was doing “a lot of thinking on the field, and usually when you’re thinking, you’re not playing fast.”

But there was also a roaring ovation from the home crowd after Treadwell caught a competitive pass for the first time in 10 months.

Slowly but surely, football’s getting back to normal for him.

Davis Potter is the sports editor of The Oxford Eagle. You can reach him at davis.potter@oxfordeagle.com. Follow him on Twitter at @DPotterOE.