Future in mind at Oxford Commons 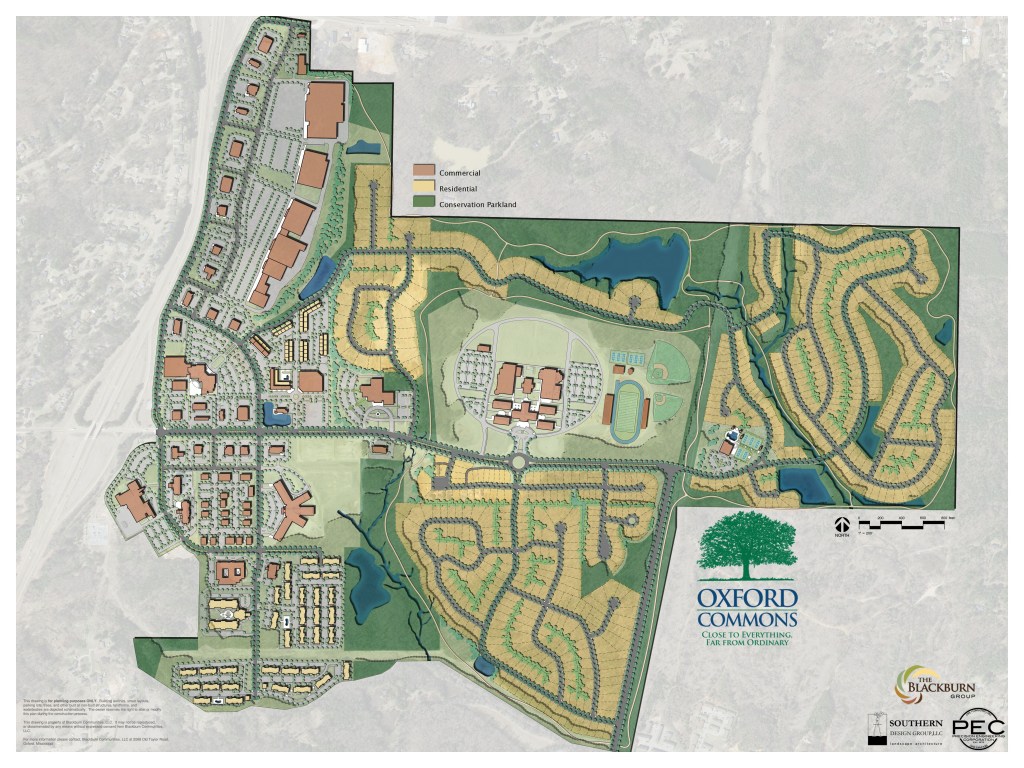 It’s a village inside of a city. It’s a place where people can walk or bike to the store or visit an elderly loved one down the street at an assisted living facility. It’s a place where children can ride their bikes to school and if they’re lucky enough to have some spare change, stop for some ice cream on the way home.

It’s a place where families can picnic just feet from their moderately priced home.

It’s a place where people work, play and spend quality time together.

Those are the visions of developer David Blackburn and his partners who are creating the planned unit development known as Oxford Commons.

Blackburn’s father-in-law, the late R.J Allen, approached the Avent family, who owned most of the land that makes up Oxford Commons, and shared his vision.

They went to the Walker and Walter families who also owned property in the area and the dream of Oxford Commons started to take fruition.

The planned unit development, or PUD, now consists of 650 acres of land. The master plan calls for about 750 single-family homes and the possibility of townhouses and mixed-use development to be built over the next decade or longer.

“This will be a 15 to 20-year project,” said Blackburn, president of Blackburn Group, the umbrella company that includes R.J. Allen and Associates, which handles most of the commercial development, and Blackburn Communities, which handles more of the residential construction. “This won’t happen overnight, but it is happening quicker than we thought.”

Construction already has begun inside the residential areas of Oxford Commons. Twenty-four homes are currently under construction. Ten more homes are in the design phase and about 30 families are already calling Oxford Commons home.

The community sits just behind the Malco Oxford Commons and Family Entertainment Center and the Oxford Conference Center. Further east into the development are Oxford High School and Della Davison Elementary, A Shell gas station and convenience store is almost complete on Oxford Commons Boulevard, the main road through the development. A Wendy’s fast-food restaurant and two hotels already exist.

The Village is planned to be Square-like, with a mixed-use scheme that could include residential townhouses or apartments on top of commercial businesses like restaurants, or retail clothing stores.

“It will be a place where you never have to get in a car,” he said.

Blackburn said he hopes Oxford Commons is a place where everyone can live, whether it is a young professional, a family of four or a retired couple.

“We are trying to offer homes in a variety of price ranges,” he said.

However, Blackburn said Oxford Commons is a family-friendly development and not meant to be a student development.

“We’re not saying a student can’t live here, of course,” he said. “But we are not marketing to that group. Students have very different needs and want different amenities than families require. We are providing the things we feel families will enjoy.”

Some of that includes lots of green space and walking trails, as well as parks and picnic areas.

There is more than 70 acres of preserved green space in the master plan, including a couple of ponds and a natural lake that has several streams coming from it.

“That just lends perfectly to having some great green areas and park lands,” Blackburn said.

Blackburn said his group is in very preliminary talks with a grocery store as well but could not release the name this early on.

“We want an organic-type grocery store that we feel would fit right in the neighborhood,” he said.

The development is the only residential and commercial development to have direct access to all three of Oxford’s highways — 7, 30 and 6.

“It really speaks to the location and it being a true central hub that represents the best of Oxford,” he said.

Blackburn said while nothing has been finalized, he foresees Oxford-University Transit eventually having a bus route to the Commons.

“It’s exciting,” Blackburn said. “I’m really enjoying the whole process. I’m impatient to see what it all looks like 20 years from now.”