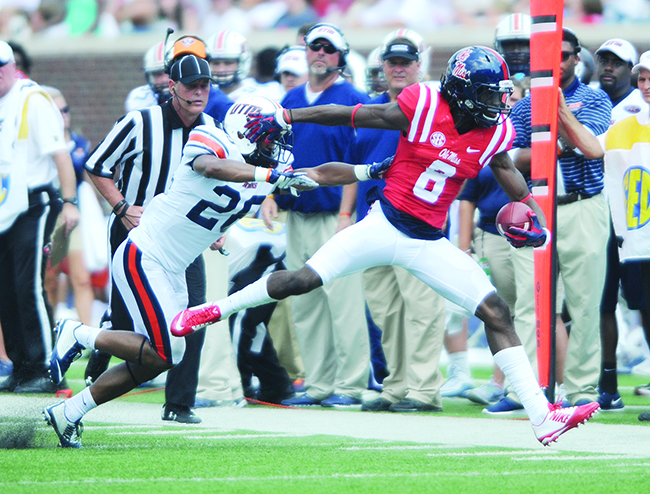 At the beginning of the day, Ole Miss’ quarterback competition was still open, according to head coach Hugh Freeze. By the end of the Rebels’ 76-3 win over UT-Martin, that competition may be getting closer to ending.
Chad Kelly got the start for Ole Miss (1-0) and performed well in his debut in a Rebel uniform. Ryan Buchanan and DeVante Kincade played as well, but it was Kelly’s performance that overshadowed everything else.
Kelly went 9-for-15 for 211 yards and two touchdowns. Both touchdown passes came in the first half and went for more than 55 yards (56, 57), adding to his 178-yard total in the first two quarters. Kelly’s only blemish was an interception that occurred when a pass to Laquon Treadwell bounced out of the receiver’s hands and into a UT-Martin defender’s waiting hands.
“I missed on a couple throws, but just being out there with my teammates, my coaches and being out there in front of fans, it was great to get the first game under the belt,” Kelly said. “Just have to know the game plan and know when you can take your shots, and we did that.”
Buchanan and Kincade played sparingly in the first half and combined for 98 yards and two touchdowns. Buchanan was responsible for both scores, including a 31-yard touchdown pass to defensive tackle Robert Nkemdiche in the second quarter. He finished the day completing 4 of 6 passes for 58 yards.
“It felt good. I got my first college touchdown, and it was nice,” Buchanan said. “I was talking to (coach) Freeze just then, and I’m not used to having guys make yards after catch because with practice,  you are down where you catch it basically. When Quincy (Adeboyejo) caught his, I thought, ‘This was nice.’… I felt like we all protected the ball really well.”
No quarterback was left empty-handed as all three had at least one passing touchdown. Kincade’s came early in the fourth quarter when he hit DaMarkus Lodge from 12 yards out. He finished with 55 yards on six completions.

Difficult rhythm
The rotation at quarterback was frequent with the game well in hand and Freeze wanting to see as much as he could from each guy. With drives lasting half the field or less most of the time, it was difficult for any quarterback, or the offense for that matter, to get in a rhythm.
“It’s a little tough,” Buchanan said. “Just because your muscles, when you sit down for a while, it’s pretty tough. But when you get that first throw out of your way on a start of a drive, you’re ready to go after that.”
Freeze didn’t say how the rotation will play out next week against Fresno State, offering only that all three have traits that can help the offense.

COLUMN: Football’s getting back to normal for Treadwell