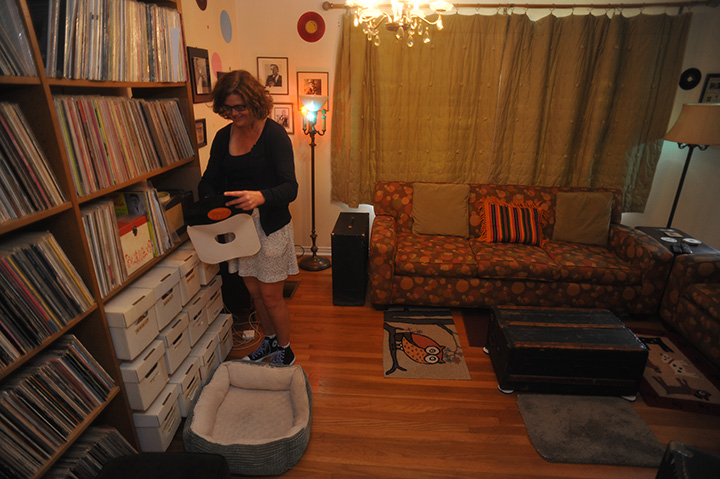 Amy Gibson looks over her house in Oxford, Miss. on Wednesday, September 2, 2015.

There’s a new trend circulating for those trying to get out of town during football season and those trying to find one of the limited spots to rest their head in Oxford after a game.

Some Oxford homeowners are using a relatively new website to generate extra income and find unique ways to travel. Airbnb allows individuals to list their own properties, whether it is just a bed or a complete mansion, for rent and matches properties to people who are looking for accommodations.

Amy Gibson discovered the site through her sister in Seattle and has turned it into an unconventional and profitable way to make friends in the Oxford area when she is not working at the J.D. Williams Library.

Gibson has been using the site more than two years and has been hosting for a little over six months. After she made her first reservation as a guest, she stayed in a New Orleans home where her host explained to her how the hosting aspect worked. Once she understood the process, she was more conformable about doing it herself.

She had previously hosted international students of University of Mississippi from Japan and Mexico in her home and she thought the experience prepped her for more short-term guests.

“We just had so much fun. It was so great…it was like having a family around, but without all the built-up history,” she said.

Gibson’s first guest to stay was a “so-so experience,” but she decided to step up her game instead of giving up after one try. She made it a point to establish healthy communication and to surprise her guests with small amenities to make them feel at home.

Gibson enjoys the company, but said it was hard to single out a specific guest who was her favorite. She even has become close friends with some of her more frequent guests. Since she rents two spare rooms in her home, multiple guests from different backgrounds can rent and get to know each other during their separate stay.

“Some of the things that I like is that people will come out and watch TV with me or with each other at night,” she said.

It gives her and the guests a chance to get to know one another and to have an interesting conversation. Gibson said that is what makes Airbnb different from any other type of lodging arrangement.

“It’s a lot like a boarding house,” she added.

Gibson said she gets a lot of students and parents that are in town to visit their children who attend Ole Miss. She said she thinks the librarian title in her bio makes parents and young people feel safe about renting from her if they have never used the site before.

Meredith Pittman, a local chef, became a member of Airbnb in 2013. She heard about the site through some friend from Memphis who had used the Airbnb app when they traveled to Chicago.

After Pittman moved to Oxford this past March, she listed her home’s extra bedrooms for football season weekends. Her first experience using it personally was when she visited Nashville.

“I rented a family’s home for a weekend for my best friend’s bachelorette party this past spring. It was absolutely perfect and super modern,” said Pittman.

She is hosting for the first time next weekend and is looking forward to the experience. She added the extra income she will generate this football season will completely pay her mortgage.

“I’m excited about hosting in Oxford because it’s so much more relaxed and enjoyable staying in a home than a hotel room. I think it will really add to the game day experience when they have an inviting home to come to after a night out or after an Ole Miss game where they can enjoy cocktails on the balcony or front porch.”

Airbnb was started in San Francisco back in 2008 and has since expanded worldwide into more than 34,000 cities in more than 190 countries. After housing more than 40 million guests, the business continues to expand as it becomes more popular with conventional travelers.

The site verifies users before they can choose to rent or host a property.

Once you join, the properties are searchable by towns and dates, so the user is always aware of what is available and what is not. The search can be tailored to price range and filtered to a bed, a room or an entire house to rent.

When a guest finds a host, they must book in order for the host to accept the reservation. Sometimes “Instant Book” is used so guests can reserve a room immediately and bypass the possible wait of confirming the request.

Guests are often repeat customers, like Gibson. She said hosting people in her home gives her extra things to do around the house, but she keeps hosting for the enjoyment.

“This is pretty tame for me,” she said.