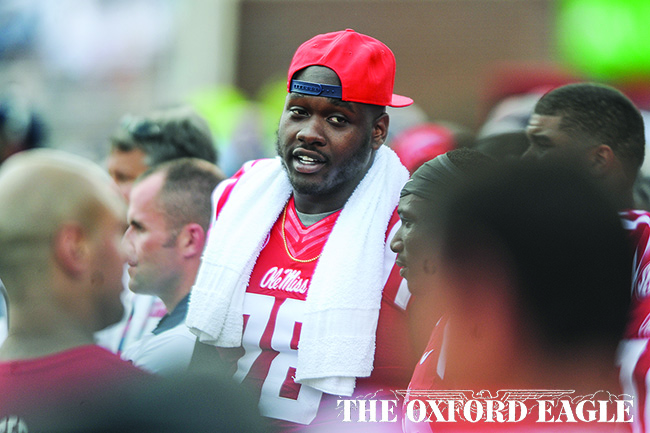 Offensive tackle Laremy Tunsil was held out of Ole Miss’ season opener against UT-Martin Saturday as “a precautionary measure” stemming from an internal investigation into alleged impermissible benefits the left tackle received during his recruitment, according to a statement released by the athletic department.

As has been well documented throughout the summer, Tunsil and his stepfather, Lindsey Miller, were embroiled in a domestic assault case against each other that was later dropped. Another layer of that case came allegations from Miller that Tunsil violated NCAA rules during his recruitment.

“We are cooperating fully with the NCAA and feel this is the best way to protect Laremy, our football program and the university,” part of the statement read.

The benching of Tunsil comes after Freeze stated at SEC media days in July that the junior would play if the season began that day. Now Freeze is not sure if he will have Tunsil by next week for Fresno State.

“I have no idea,” Freeze said after the game. “I’m not privy to basically any information (regarding Tunsil). I know that our university cooperates with the process in any of these situations fully.”

Along with Tunsil, linebacker C.J. Johnson and defensive back C.J. Hampton missed Saturday’s game for violating team rules. Freeze called it an “in-house issue” and was “pretty confident” the punishment would only be for one game each.

Spreading the wealth
Ole Miss’ offense churned out 662 total yards and 10 touchdowns. Nine of those scores came from different players as running back Jaylon Walton was the only Rebel to have two touchdowns.

Gift for mom
Robert Nkemdiche’s 31-yard touchdown catch was more for his mother than it was for Nkemdiche, Freeze said. It was the first time Nkemdiche’s mother, Beverly, has been able to see him play in more than a year. The last time was when Ole Miss played Texas A&M Nkemdiche’s freshman year when he was injured.

To honor his mom being in attendance, he wanted to do something special for her, so he and Freeze came up with a play during practice last week.

“Me and coach Freeze came to an agreement that what was for my mom,” Nkemdiche said. “It just happened so sudden. I just took off with the ball and just started running.”

Extra Points
The 27 points scored by Ole Miss in the first quarter were the most scored in 20 years … Walton’s first two carries of the day went for touchdowns … It was the first time Ole Miss scored 76 points in a game since the Rebels did it against West Tennessee Teachers College in 1935.