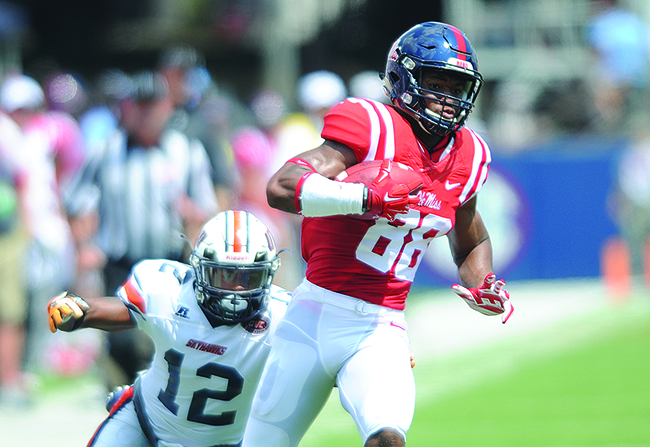 Chad Kelly took the first snap with Ole Miss’ offense Saturday, but it didn’t really matter who was at the controls.

No. 17 Ole Miss jumped on UT-Martin with four first-quarter touchdowns and cruised to a 76-3 win in front of 60,186 fans at Vaught-Hemingway Stadium in its season opener. The Rebels (1-0) piled up 662 total yards and had 41 points before halftime, scoring the most points they have in a game since 1935.

The pace wasn’t there with the Rebels getting off just 64 snaps, but Ole Miss averaged 10.3 yards per play with Kelly and sophomores Ryan Buchanan and DeVante Kincade combining for five touchdown passes. Jaylen Walton ran for touchdowns of 60 and 4 yards, Eugene Brazley had a 70-yard scoring run, D.K. Buford added a 20-yard touchdown run, and true freshman DaMarkus Lodge had his first touchdown catch as 10 different Rebels scored.

“It was a good first day for us,” Ole Miss coach Hugh Freeze said.

Freeze insisted throughout fall camp he’d get all three of his quarterbacks snaps in the opener, and that rotation started early. Kincade followed Kelly midway through the first quarter while Buchanan made his first appearance late in the first quarter, capping his first drive with a 15-yard touchdown pass to Quincy Adeboyejo to push Ole Miss’ lead to 27-0 before the opening quarter was over.

“Sometimes I believe the media doesn’t believe me when I say that I like things about all three of our guys, and I meant that,” Freeze said. “I didn’t see anything today that really changed my mind (about the permanent starter).”

Kelly got the most extensive action of the trio, finishing 9 of 15 for 211 yards with two touchdowns through the air and one on the ground and an interception. Ole Miss’ receivers consistently got behind the UT-Martin secondary, and Kelly showed his arm talent with touchdown tosses of 57 yards to Cody Core and 56 yards to Markell Pack.

Buchanan went 4-for-6 for 58 yards, including a 31-yard touchdown toss to Robert Nkemdiche for one of his two scores. Kincade completed six of his seven attempts for 55 yards and connected with Lodge for a 12-yard touchdown early in the fourth quarter.

“We have weapons all over the field,” Kelly said. “I feel like we have a great team, and we just have to make sure we’re hitting on all cylinders every play and all 11 players are doing their job so we can have a great season.”

UT-Martin managed just 290 total yards against the nation’s top scoring defense from a season ago and didn’t cross midfield until the 8:25 mark of the second quarter. Nkemdiche blocked the Skyhawks’ 23-yard field goal attempt in the second quarter, and safety Trae Elston intercepted UT-Martin quarterback Jarod Neal inside Ole Miss’ 10-yard line and returned it 93 yards for a score to make it 48-0 in the third quarter.

It’s a defensive standard, Nkemdiche said, that’s become the norm for the Rebels.

“(Defensive coordinator Dave Wommack) is hard to make him give you a compliment,” Nkemdiche said. “It’s good to have that in a coach. You’re always looking for areas where you’re lacking. … He sets the bar high.”