Liggins could have ‘surprising year’ at TE 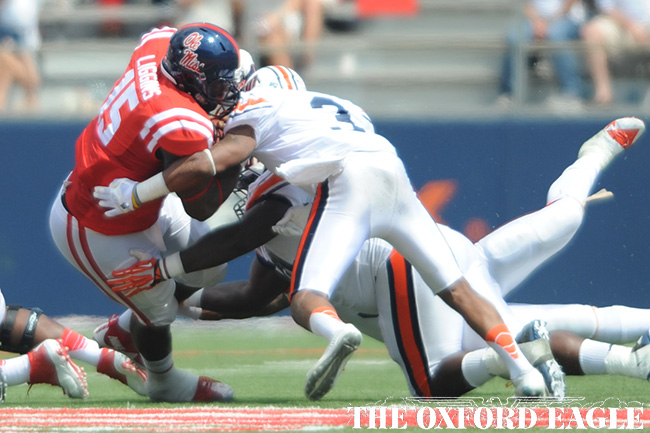 Jeremy Liggins has always been known for a unique combination of size and athleticism, but Ole Miss’ redshirt junior is starting to get noticed because of his hands.

Liggins, who’s listed as Evan Engram’s backup at tight end, didn’t catch a pass in Ole Miss’ opening win over UT-Martin on Saturday, but the Rebels didn’t need him to in the lopsided affair. The Rebels used him primarily as a blocker as they rotated through multiple tight ends early on before things got out of hand.

He also took a snap at quarterback in Ole Miss’ jumbo package, pushing ahead for a 1-yard run late in the second quarter.

It was a role the 6-foot-3, 296-pound Liggins was limited to a season ago in his first year at Ole Miss after transferring from East Mississippi Community College, but he’s in a position to do more when the Rebels actually need it.

“I think a lot of people sleep on me running routes,” Liggins said. “I think that could be a big part of my game this year — running routes and catching the ball.”

So do his coaches, at least when he’s healthy.

The former Lafayette High standout, whose size has moved him from quarterback to defensive line to tight end to offensive line and back to tight end again since he entered college, was held out of most practices in fall camp with a strained hamstring and returned at the beginning of last week, head coach Hugh Freeze said.

But Freeze and the rest of the offensive coaches got a glimpse of that athleticism in the passing game in the few practices he went through before the injury.

“He made some phenomenal catches and looked really good doing it,” Freeze said. “He’s got some great hands for a big guy. So I think he is going to have a surprising year should he stay healthy and do the little things right off the field that have slowed him down from time to time.”

Liggins said he “can definitely move all the way now” and showed it by taking the field Saturday. He’s also managed to keep his weight down despite not being fully involved in practice.

Comforting work
Liggins started his career at Ole Miss switching between the Rebels’ jumbo signal caller and tight end. A rash of injuries along the offensive line and some misses in recruiting moved him to offensive tackle in the spring, a position Freeze called “his future” at the time, but that was before the numbers at tight end took a hit when Sammie Epps was dismissed from the team this summer.

Liggins’ confidence in being more than a blocker at the position comes from a sense of familiarity with the offense now that he’s been in it for a full year. Putting in the work to become a viable option in the passing game has played a part, too.

“It’s just something I had to work on, man,” Liggins said of his receiving skills. “Just spending a lot of times on the JUGS machine and doing a lot of individual work.”
Liggins is the ultimate wild card for Ole Miss’ offense, and as Saturday showed, he’ll still get the call behind center from time to time when the Rebels need a yard or two.

But he’s ready to prove he’s got the hands to go with everything else.

“As long as (the quarterbacks) put it around me, I think I can get to it,” Liggins said.