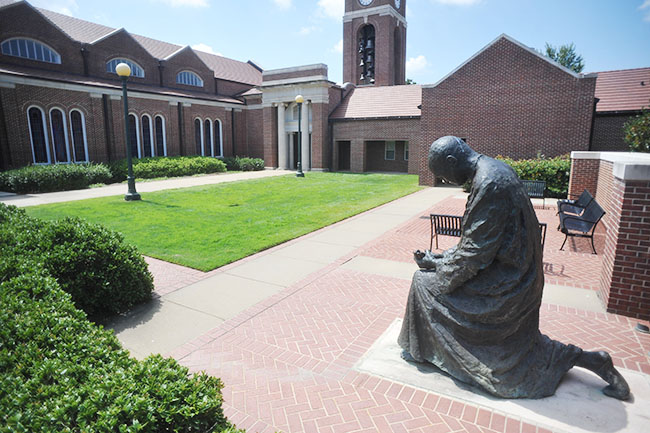 The area behind Paris-Yates Chapel at Ole Miss, in Oxford, Miss. on Thursday, September 3, 2015, will be dedicated to Will Campbell during a ceremony on Friday, September 11, 2015.

The Winter Institute for Racial Reconciliation will be dedicating the Rev. Will Davis Campbell Plaza at 2 p.m. on Friday.

The ceremony will be outside the Paris-Yates Chapel on the University of Mississippi campus and will be followed by the annual William Winter Institute Awards Presentation and Reception.

“In Dr. (Dan) Jones’ report last year on race relations on campus, he spoke about making sure we use the spaces on campus as teachable moments in order to show our complex, sometimes painful and sometimes inspiring history,” she said.

The dedication planning has been in the process for almost a year, but Campbell’s activism consumed his adult life.

Born in Amite County, Miss., Campbell was the director of religious life for the University of Mississippi from 1954 until 1956. He tried to steer the campus toward integration, but was retaliated against violently for his views.

Undeterred, Campbell later left his religious post at the university and became one of the first Caucasian participants of the Civil Rights Movement.

Campbell’s legacy keeps up with the Winter Institute’s mission to “to support a movement of racial equity and wholeness as a pathway to ending and transcending all division and discrimination based on difference.”

“Reverend Campbell was an obvious choice to honor because he was prophetic on race.  At the height of resistance to the civil rights movement, he was a white Southerner who said that black lives matter,” Glisson said.

Notable attendees of the dedication will include Acting Chancellor Morris Stokes, Noel E. Wilkin, Lee M. Cohen as well as others.

Dedicating the plaza to Campbell is meant to challenge and inspire future generations to strive for equality and to have the courage to stand up and make a difference with their actions.

“We hope to show students that there are people who came before us who made moral choices, even when the larger culture pressures you to support the status quo,” Glisson said.