LOOKING FOR MORE: Despite lopsided opener, defense still has ‘a lot to fix’ 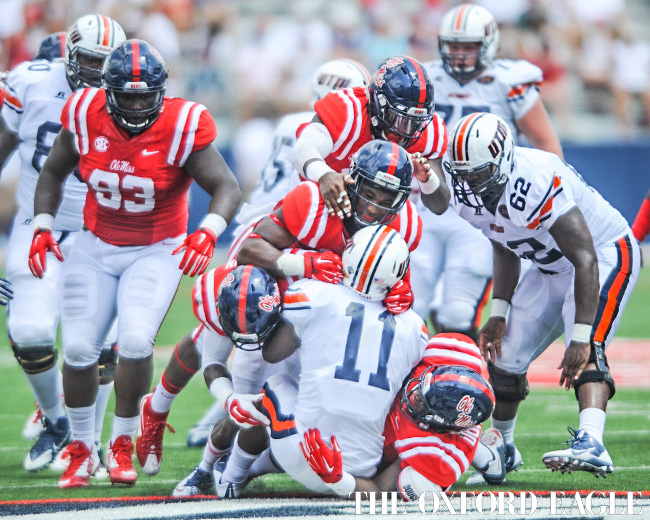 There are plenty of reasons for expectations to be high for Ole Miss’ defense.

For starters, the Rebels led the nation in scoring defense a season ago and have half of their starters back on that side of the ball. Ole Miss has added more big bodies to an already deep and talented defensive line and a pair of junior college All-Americans to its secondary through recruiting.

Ole Miss proved to be just as stingy in its first test run this season, limiting an overmatched Tennessee-Martin squad to three points. The Skyhawks didn’t get on the board until late in the third quarter and didn’t cross midfield until midway through the second quarter.

But coach and players didn’t think the performance was stingy enough.

“I don’t think I was satisfied even though they had three points, but we wanted the goose egg,” safety Trae Elston said after Saturday’s game. “We still wasn’t tackling good. A few little busts here and there on the wheel route like in in the third quarter. I think it’s always time for improvement. I think we should never be satisfied as a defense, so we can always improve.”

UT-Martin finished with 290 yards of offense, nearly doubling the 156 yards Ole Miss allowed to Presbyterian, the lone Football Championship Subdivision team on the Rebels’ schedule a season ago. The Skyhawks needed six different players to combine to rush for 141 yards, but backs Trent Garland and Preston Baker has some success against Ole Miss’ front seven, averaging 4.5 yards a carry on their 15 attempts, while the Rebels also got hit with a 23-yard gainer from Taylor Higgason.

“We still have a lot to fix in this defense,” defensive tackle Robert Nkemdiche said. “We had a lot of holes. We had some big plays in the gaps, so we’ve really got to go back, clean it up and get ready for Fresno (State).”

It wasn’t always the Rebels’ first- and second-team defense UT-Martin was going against.

Ole Miss started using that depth up front almost immediately, rotating 12 linemen throughout the day. With the game comfortably in hand by halftime, the Rebels started going deep into their bench in the second half with the third and fourth teams finishing the game.

The wheel route Elston alluded to set up UT-Martin’s only points and came on a bust by the Rebels’ fourth-string unit, defensive coordinator Dave Wommack said. The play went for 64 yards and was by far the Skyhawks’ longest gainer of the day.

“That was on the linebacker down the sideline,” Wommack said. “So I think some of those down-the-line guys have a lot of improvement to make.”

Tackling the issue
Ole Miss also chose not to do full-scale tackling in fall camp in order to get to the season fully healthy. Elston wasn’t the only one who thought the Rebels’ efforts to get Skyhawk ballcarriers to the ground suffered at times as a result, even if some of it was expected.

But everything that needs to be fixed, Wommack said, can be corrected in practice.

“I was concerned about that because we didn’t tackle that much in fall camp,” Wommack said. “Knew that would be a little bit of an issue going into the game. We worked the heck out of fundamental tackles, but not live tackling. Sometimes that’s an issue. We’ll address it and get better as we go on.

“I thought it could’ve been crisper, but you expect that sometimes in the first game. There’s some areas I’m sure we’ll need to pick it up after watching the film, but I’m glad a lot of guys got to play.”