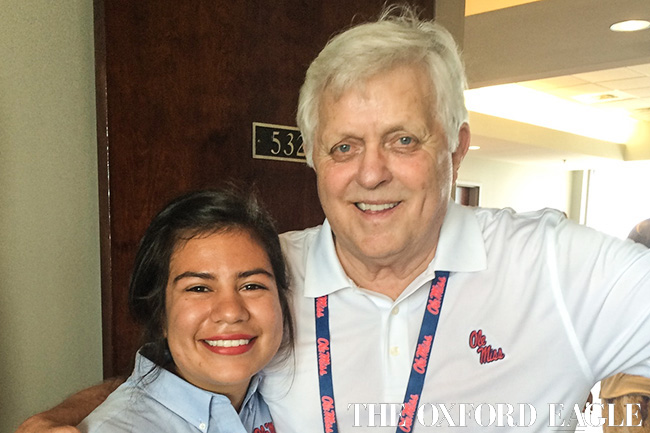 Daisey Martinez might be new to Oxford, but she will make her mark by working with children while she’s here.

The 21-year-old University of Mississippi student from Hazlehurst is majoring in integrated marketing and transferred here from Copiah-Lincoln Community College.

She is here after spending a summer helping local youth.

“I worked with Rising,” she said. “They had a summer learning program for all the children from Oxford-Lafayette County who are underprivileged. I was basically there from 7 until 4. They learned how to swim; they did art, they worked on their reading and math skills so they don’t get left behind.”

She said while there the kids nicknamed her “Miss Daisey” and she enjoyed being there for them.

“They just made me smile every day,” she said. “I was the nice one. So, when everyone else was tough on them, I would be nice to them. I got to just play with them every day and get to know them. Hopefully setting a good example.”

While the summer was great, Martinez said she’s ready to be back in the daily grind of school.

“Because I am a transfer student it was just exciting when I walked in my first class and I actually knew somebody,” she said.

“Now I know more people and I’m excited about new things to come. I’m excited because a lot of events are coming up and I’ll have a lot to do.”

But, she’s not thrilled with the traffic, lack of parking and sheer volume of people here in Oxford when school is in session. She said the summer is more peaceful. But she’s getting used to it because of her job working skyboxes for football games, which has its perks, she said.

“I got to meet Doctor Khayat,” she said. “You know you’re greeting people like, ‘Hello sir,’ and then I slowly realized and my hands went up. Then I tried to talk to him and I started tearing up and then he hugged me. It was already worth it.”