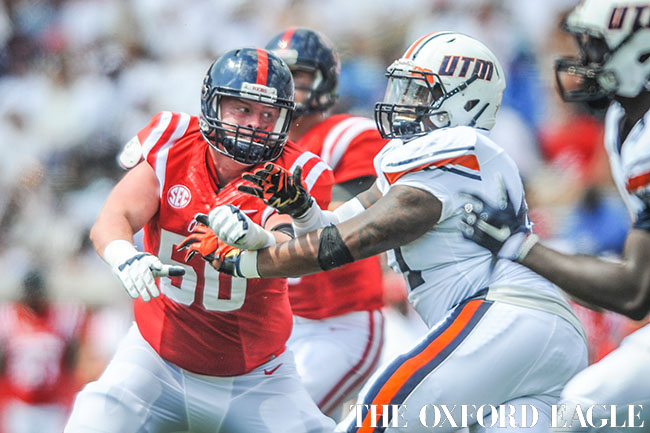 With the loss of Laremy Tunsil due to a pending NCAA investigation, the offensive line for No. 17 Ole Miss had a shift in lineup before the first snap of the season even took place.

For the most part, the Rebels faired well without their star left tackle lining up next to them.

During fall camp, offensive line coach Matt Luke would hold out certain players and shuffle the rest of his guys around to accommodate the loss. That practice is paying off the second week into the season.

“I feel like we’ve prepared as good as we can,” Luke said. “Fahn (Cooper) has played left before and gives you a little comfort. You have to prepare for every situation. Having a little bit more depth helps. We’re still not really deep at the tackle position or where you want to be.”

With Tunsil out, Cooper moved to left tackle on Saturday and redshirt freshman Sean Rawlings had his first career start, filling the right tackle spot. It was the first game action for Rawlings, who had to spend his time practicing all last year then finds himself part of the game plan to replace a potential top NFL draft pick.

“It was good to get out there and knock the dust off. It was good to be competing again,” Rawlings said. “There was a lot of things that I could’ve done better. I felt like I went out there and competed, and I gave great effort and that will never be a question. There’s a lot of little stuff technique-wise that I need to fix.”

The offensive line got drastically younger with the addition of Rawlings to the starting rotation. He joins true freshman Javon Patterson, who started his first game against UT-Martin as well. Head coach Hugh Freeze commented on Monday that Patterson graded out the highest a freshman has graded at that position.

“To be a true freshman, he had as good a performance in a first game as I’ve been around,” Luke said. “He played like a veteran. He wasn’t a deer in the headlights. He was good on his assignments. Good communication on the sideline. He was calm, cool.”

Taylor returns
Though not fully healed from a torn labrum sustained during fall camp, guard Rod Taylor returned to practice Tuesday. It could not have come at a better time for Luke and the rest of the offensive line.

With Tunsil out, Taylor could see time at a tackle position, which is where he practiced Tuesday.

“It was more of an experiment than anything else,” Luke said. “To see how he would do. Because we feel like he is athletic enough, but at the same time, we wanted to see how he was mentally. Changing position, changing sides. We just wanted to check him out. He did fine.”

Luke also mentioned that as a last resort — and if Tunsil’s absence becomes long-term — Ole Miss had center Robert Conyers take snaps at tackle during the game last week to build more experience at the position. With Ben Still a capable center, the move of Conyers to tackle would not leave a gap in the middle of the line.

Gross out
It was announced Tuesday through a statement from the athletics department that defensive lineman Issac Gross has elected to have season-ending neck surgery. He will use a medical redshirt this year and return for a fifth year.

The statement also said the medical staff was “optimistic” for a full recovery.