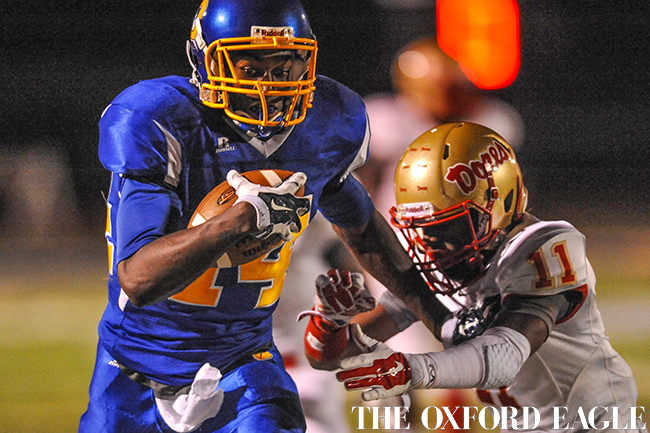 It has been a few years since Oxford and Lafayette have been on equal ground competitively.

This seems to be one of those years as the Commodores, ranked No. 9 in the state’s newest Associated Press poll, host No. 8 Oxford in the annual Crosstown Classic Friday night at Lafayette’s William L. Buford Field.

It is a intense game every year regardless of how both teams are fairing at that stage of the season, but a revitalized Commodore team mixed with the potent Chargers and a battle of two of the best teams in the state has the volume turned to 11.

“(Lafayette’s) definitely a better team this year. There’s no doubt about that,” Oxford quarterback Jack Abraham said. “We’ve definitely got to come in and play good, too. It’s eaten at our guys this week at practice.”

Lafayette rolls into the rivalry game with a perfect 3-0 record after defeating Grenada, 20-14, last week. Senior running back Tyrell Price leads the improved Commodore offense, rushing for 272 yards last week and racking up seven touchdowns on the ground in the first three games of the season.

“(Price) is healthy, and he runs really, really hard,” Oxford coach Johnny Hill said. “Their offensive line is really good. Their defensive front is really good. Their secondary does a real good job and is very well coached. They put up a lot of different looks that’s going to make it tough on us.”

Last one
This year’s game will mean a little more for Hill on a personal level as it will be his final Crosstown Classic as a coach with him retiring at the end of the season. The game and opponent are important to Hill, but there is something special when it comes to facing the rival on the other side of Highway 6.

“There’s always pressure from a coaching end of it to beat your crosstown rivals,” Hill said. “There’s probably a little more pressure to me this year than I’ve ever had because it sure would be a bad taste in my mouth that I’ll have to eat the rest of my life to lose that last game with Lafayette.”

That has not been lost on Abraham and the rest of the Charger seniors, who have never lost to Lafayette during their time at Oxford. They do not intend to start now, aiming to send their coach out on a high note when it comes to the Crosstown Classic.

“Us seniors have talked about that,” Abraham said. “It is his last game, and we had a team meeting and (Hill) told that and it kind of got to us. We’re definitely going to think about it because it’s ours, too. We’ve got to make sure the underclassmen are ready to roll.”

To accomplish that goal, Oxford will have to end a two-game losing skid, something the seniors have never experienced, after losing a close game to Madison Central last Friday.
The Chargers (1-2) have faced three Class 6A opponents and came out winning just one of those contests. Lafayette is not fazed by the Chargers’ losing record and knows they have a potent offense of their own.

Sophomore Drew Bianco anchors the running game, and D.K. Metcalf, Jimmy Greaser and Ken Presley are just some of the threats out wide the Charger offense poses to opposing defenses.

“(Oxford) is not forced to punt, and as a result, they put 29 points on the board against Madison Central,” Lafayette coach Eric Robertson said. “We have to get some stops and then when we get the ball, we have to take advantage of it by eating the clock up, getting first downs and getting points. And I think our offense is capable of doing that.”

Oxford has won the last three in the series, two of them being shutouts.

“It’s time for Lafayette to win it again,” Robertson said.