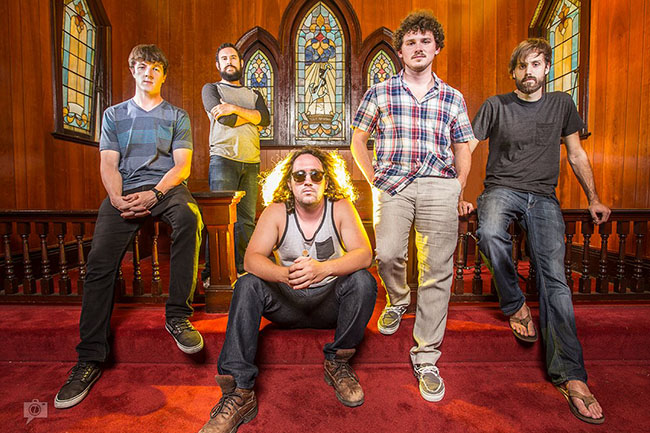 New Orleans funk and groove bandk Earphunk will be in concert tonight at 8 p.m. at The Lyric. Tickets are $15 per person and available at www.thelyricoxford.com.

New Orleans natives Earphunk will take the stage tonight at The Lyric. Doors are set to open at 8 p.m.

The five piece started out as a group of childhood friends playing with a “funk foundation and and over time different things blended in,” said Christian Galle, who plays keys with the band.

“We all went to the same schools together,” said Galle. “A couple of us met up again at LSU, so we just started playing shows around Baton Rouge.”

While some bands have a problem sticking with a name for more than one show, Earphunk experienced the flip side of that problem when the band arrived to its first show.

“This was actually a few shows before I joined,” said Galle. “The first show they played was at this bar called Bogies and they didn’t have a name to give the bar owner, so Mark [Hempe, vocalist/guitarist] came up with the name on the spot and it just stuck.”

Like many bands that come through Oxford, Earphunk started out playing a few fraternity houses until it had a large enough following to get booked for a few shows at Proud Larry’s.

“Yeah, we played a few shows [at Proud Larry’s],” Galle said. “Then this time we got pushed up to The Lyric. It’s pretty cool.”

Since 2011, Earphunk has released three studio albums, an EP and a live album recorded at Tipitina’s in the members’ hometown.

To follow up its live album the band has been working in the studio with legendary producer and engineer Steve Albini, who famously worked with Nirvana for In Utero, in Chicago.

“Yeah, Steve’s the man,” said Galle. “He’s a legend. We’ve got about six tracks now and since our songs tend to be longer it’s looking like it’ll be a full length.”

They don’t have a release date planned but are “hoping for early next year. We don’t want to sit on it for too long, but we want to make sure it’s finished when it gets released. So we’re just trying to find that sweet spot,” said Galle.

If you’re a fan of groovy jam bands and funky rhythms then make sure to catch them tonight. The box Office opens at 7:30 p.m. and you’re not going to want to miss this, so be sure to grab your tickets as soon as you can.

Of Montreal puts on pyschadelic showcase at The Lyric…