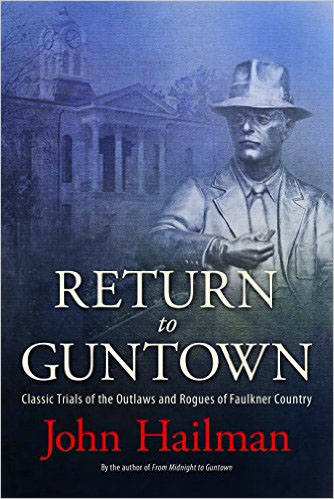 When retired federal prosecutor and wine connoisseur John Hailman presented all the stories he wanted to include in his book to his publisher, University Press, he handed them a huge stack.

“They told me I had to cut that in half,” Hailman said earlier this week.

The first half, “From Midnight to Guntown — True Crime Stories from a Federal Prosecutor in Mississippi,” included the first half of the stack that listed case after case of interesting cases that were prosecuted at the Federal Courthouse in Oxford. The stories included bank robberies, corruption cases and even terrorism incidents that were handled during the last 40 years of the United States District Court for the Northern District of Mississippi. The book contained the most notable of cases, including the infamous bank robber Paddy Mitchell, the Emmett Till case, Chicago drug king Jeff Fort of Aberdeen, the Dickie Scruggs judicial bribery case and the 1973 shooting of Sen. John Stennis.

Hailman has taken his second half of the stack of stories and included them in his newest book, “Return to Guntown: Classic Trials of the Outlaws and Rogues of Faulkner County.”

The book went on sale last week and can be purchased at Square Books, Amazon and Ebooks online.

“The first book had a lot more famous cases,” Hailman said. “Many of these cases are even better stories but just not as well-known.”

Willie Nelson has even endorsed the new book.

“That Hailman fellow from Mississippi who tells those funny stories about bank robberies — he should write a book. Oh he did? Well that’s good,” says Nelson on the back cover of the book.

Hailman will do a book signing on Oct. 19 at Square Books.

Chapters include “Guns, Bombs and Moonshine Whiskey,” “Drug Kingpins Have Troubles Too,” and “Crime Victims Fight Back.”

The author has had much to celebrate recently. Including the release of his latest nonfiction novel, he recently discovered the Mississippi Library Association selected his first book, “From Midnight to Guntown,” for the Non-Fiction Award for 2015.

“I was really excited,” Hailman said about the award.

Hailman was a published author before getting into bank robberies and crime stories. He was a columnist for the Washington Post. He served as a nationally syndicated wine, food and travel columnist for Gannett News Service. His weekly column appeared in 100 daily papers for 15 years. He is the author of a critically acclaimed biography entitled, “Thomas Jefferson On Wine.”