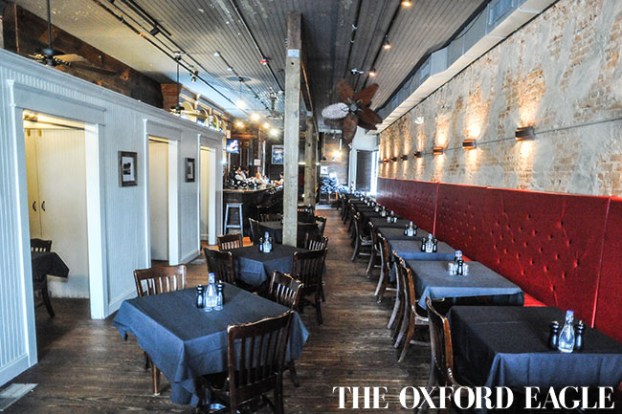 The Oxford Grillehouse is located on the Square in Oxford, Miss. on Wednesday, September 9, 2015.

One Oxford restaurant owner, fired up about all the shootings of police officers across the nation, decided to fire up his grill for local law enforcement.

Clint Boutwell, owner of Oxford Grillehouse, for the month of September is giving law enforcement a free appetizer and 50 percent off a steak dinner.

All anyone with the Oxford Police Department, Lafayette County Sheriff’s Office and University Police Department, whether full time or part time, has to do is go to his restaurant on the Square in uniform or show a badge and then enjoy a meal.

“Everybody’s seen in the news lately there’s groups of people that are attacking police and ambushing them, and it’s upset me,” he said.

Boutwell, 35, and an Oxford native, said the racial issues behind the shootings of late are frustrating and wants everyone to recognize service above self.

“I’m not a political guy — I serve everybody,” Boutwell said. “But when it comes down to people who put their life on the line and when you call 911, they don’t ask what color you are. They just show up and help you. It has to do with Americans doing their job to protect other Americans.”

So far almost a dozen officers have come by to take advantage of his deal, which he first publicized on Facebook.

“It’s probably the most I’ve ever had liked on my Facebook page with 178 likes,” he said. “People I don’t even know are reposting it.”

OPD Maj. Jeff McCutchen said his department is grateful for the gesture and said the thanks goes both ways.

“It is a wonderfully kind gesture and greatly appreciated,” he said. “We also want our citizens and businesses to know that the relationships we have been able to build over the years should be an example to all cities. Oxford is such a special place to live and work and for us in law enforcement to get to serve this community, we want to be the ones to say thank you. We are blessed to serve you and have the support of our great community.”

Boutwell said there’s no strings attached and he’s happy to offer a bit of humanity.

“I’m just showing a little appreciation,” he said. “It’s a small gesture of humanity to say thank you to those who watch our butts every day.”

Oxford’s park commission members weren’t thrilled with idea of moving the historical Skipwith Cottage to an area near the Skate... read more